After sifting through all the carnage of the Chicago game, one thing really stands out on offense. The minimal impact from Dez Bryant.

Share All sharing options for: Dez Bryant Disappears From Cowboys Gameplan Again. Why?

Dez Bryant is the best receiver the Dallas Cowboys have on their roster, and it can be argued that his talents should make him a top receiver in all of the NFL. So how is it that a player of that quality ends up with only two catches for 12 yards against Chicago?

Well, let's discuss some of the obvious questions and arguments. The Cowboys only ran 55 offensive plays in the game, and of that number 25 were passes with 14 completions. So the overall opportunities were limited. In addition, five of those passes (and three completions) were by Kyle Orton in garbage time.

Broken down by targets, Bryant had four on the night. DeMarco Murray led the targets category with five, Miles Austin had four and a three of other guys had three. That's a pretty even distribution, but should it be? In a game when offense was paramount, shouldn't have Dallas made a collective effort to get the ball to their star playmaker? In the first half, Bryant only had two targets.

I submit it wasn't Bryant's fault. It was the play-calling and Tony Romo. For whatever reason, Bryant wasn't the primary (or secondary read) on some plays, and on others Romo just chose to go in a different direction. Here are some examples. (Click on the photos to get slightly larger versions if you have trouble seeing them)

Play 1: On the first drive, the Cowboys finally decide to throw the ball after a number of successful runs by Murray. They face a 2nd and 4 at the Bears 38. Notice three things in the graphic below: 1) Dez is singled up with a corner in the red box. Dez has driven straight up field and has the corner turned to keep giving up ground. 2) The green arrow shows that Dez is setting up to break out and back up field. He has the defender set up perfectly and is going to be wide open (trust me, he's wide open when he makes the break). 3) The yellow circle shows Romo still has the ball, and another All-22 angle shows he looked to that side of the field. Why he doesn't throw to Dez here is hard to say, but the Cowboys have him wide open for a first down. The result of the play was an imcompletion to Miles Austin. 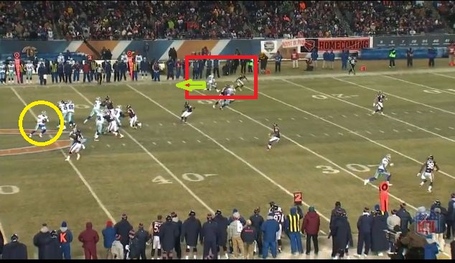 Play 2: On the next play, Dez is going to get open again. Take a look below, Romo is shown in the yellow circle with the ball in hand, still surveying the field. Dez is shown in the red box setting up his defender for what he thinks is a short pass to get the first down. You can see the safety help over the top is far away and of no immediate help. 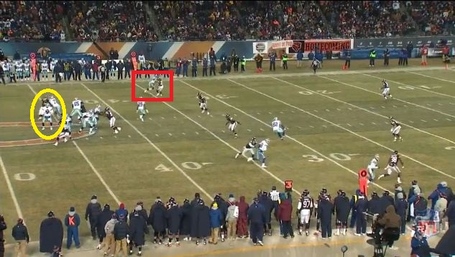 Now Romo knows the route Dez is running, he can see that the corner is sitting down on the short pass and he can see the safety help is nowhere to be found. In this next image below, you can see the progression as Romo chooses to go short to Murray (who did pick up the first down), but once again they have bypassed the opportunity to get the ball in their playmaker's hands heading down field. Look how Dez has passed his coverage and the open field represented by the green arrow. 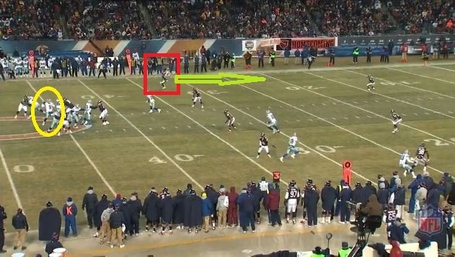 Play 3: You can't really blame anybody on the next play. Romo makes a decision between Gavin Escobar and Dez Bryant. Escobar is in the slot and has a linebacker on him. The middle of the field is wide open if he beats the linebacker. That's a pretty good bet for Romo. But, just to prove that Dez is getting open on a lot of plays and the Cowboys are not getting him the ball enough, look how open Dez gets on the play. And with his open field ability, you could imagine the huge play it could be for him.

Part A: Romo is choosing between Escobar (top red box) and Dez (bottom red box) who are setting up their routes. 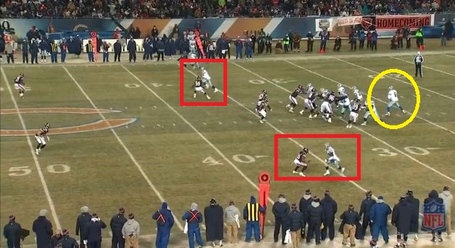 Part B: Both receivers beat the coverage and are wide open. 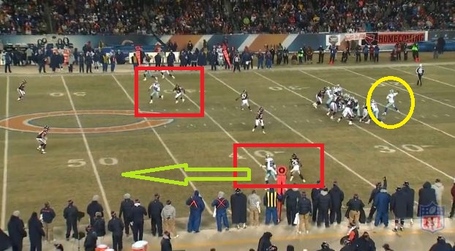 Play 4: This play occurs in the infamous "right before halftime" drive. It's the play after Jason Witten drops and easy pass. It's 2nd and 10, the Bears are running a zone underneath with four defenders set up at the first-down sticks. They have two safeties deep. Dez is running an "in" route to a perfect open spot in the zone beyond the sticks. Romo even looks to that side of the field but why he didn't see this route opening up is unknown.

Take a look at the point when he decides to throw underneath to Murray. 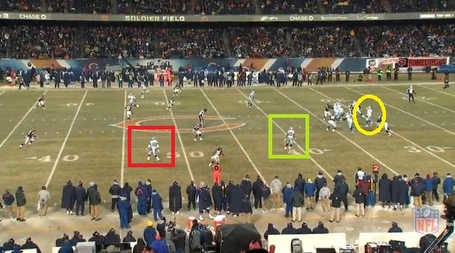 That would have been a pretty easy throw for a first down. (Romo yellow, Murray green, Bryant red)

You can say that this is cherry-picking plays to prove a point, but the plays are there for the Cowboys to take advantage of Dez Bryant's tremendous talents. For some reason in Chicago the team didn't try.