Cowboys Best Player: Who Would You Take?

The Cowboys have a lot of standout players at the skill positions, but it's someone else who is truly the top dog in this kennel.

Share All sharing options for: Cowboys Best Player: Who Would You Take?

I've spent a lot of time over the past two days watching the All-22 film from the Bears game. The Cowboys flaws are readily apparent when you watch it. They don't cover well, they don't rush the passer well, they don't show much creativity on offense and their deep passing game has virtually disappeared from the landscape. One player, though, was just about flawless in the game. Right now, I think there is plenty of evidence that he is the Cowboys best player, and he rarely gets talked about.

Tyron Smith is a beast at left tackle, he's as good as I've seen in a while, and once the rest of the league catches on he will be thought of as among the best left tackles in the game, even by casual fans. He is that dominant.

In the Bears game Smith found himself lined up across from Julius Peppers for large portions of the game, Shea McClellin also got handful of snaps against Smith. Peppers stat line from the game reads exactly one tackle, McClellin's says one assist. I watched every play concentrating on Smith for the whole game, he had exactly one play where he kind of got beat for moderate pressure on Romo, who completed the pass anyway. Otherwise, Smith was a stone wall and he was given no help blocking. Forget Revis Island, welcome to Tyron Island.

The young tackle demonstrates flawless technique along with agility and strength. His footwork on his shuffle out or back is perfect and his balance is always over the legs, never too far out front or leaning back. When he gets his mitts on the opposition, he doesn't let them get free. Left tackles are usually known for their pass blocking, that's where the money is made. And Smith is as good as they get there. But what really sets him apart is his run blocking. He's very adept at hitting his initial block then getting to the second-level. He can maul straight ahead or they can pull or loop him out on a sweep. Check out this example:

Here we see Tyron (red box) at the snap of a run. He's setting up to loop outside (green arrow) on an outside run.

As two tight ends block down, Smith gets going to the outside (red box) and has a Bears defender (yellow box) in his sights.

Out in space against a quicker defender, Smith still makes solid contact (red box) and takes his guy out of the play.

The whole is opened and DeMarco Murray has clear sailing for a nice gain (green arrow). 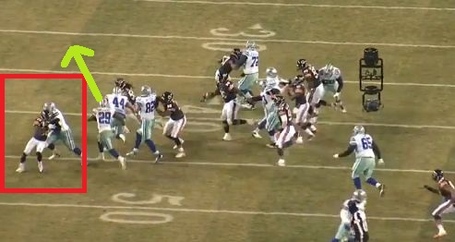 Smith makes plays like this look easy, but it isn't. Especially for big and tall tackles. Frankly, almost everything he does looks effortless because of his excellent footwork, he always looks balanced and under control.

Tony Romo is the star QB, Dez Bryant is the uber-talented WR, Sean Lee is as good as they come when healthy, DeMarcus Ware and Jason Witten are vets likely headed to the Hall of Fame. But right now, for consistency of play, for durability, for potential for growth... Tyron Smith might just be the best football player on the team.