Tony Romo Isn't The Only One To Blame, But There's No Excusing The Final Two Drives

There's plenty of debate about Tony Romo's role in the Cowboys run of mediocrity recently, and Sunday's game will only add to it.

Share All sharing options for: Tony Romo Isn't The Only One To Blame, But There's No Excusing The Final Two Drives

If you want to blame Tony Romo for the loss against the Green Bay Packers, you'd be wrong. If you wanted to blame the defense for the loss, you'd be wrong. Bill Callahan? Wrong. Jason Garret? Wrong. Jerry Jones? Nope. For you to be totally right about assigning blame for the epic meltdown on Sunday then you'd have say the entire Dallas Cowboys organization. It is impossible to blame just one area without realizing the culpability of another. The defense stinks, but they held Green Bay to three first half points. Surely the offense could milk enough clock to hold on to a 23-point lead? Bill Callahan called too many passes but Jason Garrett allowed it to happen. The Cowboys tried to call a run when it mattered late but Romo changed the play. You can go on and on with this.

But here's one thing you can say, Tony Romo blew it at the end. It's a fact. This is not to say that Romo is a bad quarterback, or that everything that has ever happened bad to Dallas is his fault. It's hard to have a healthy debate about Romo because people go to extremes about defending or accusing Romo; either he's the biggest saint or the biggest sinner. In reality he's something in between. At times a very good NFL quarterback who has flaws.

And a few of those flaws were on display when the Cowboys were trying to hold on to a 36-31 lead late in the game. Specifically, the two plays that led to the two interceptions.

On the first one, we already know that he changed the play from a run to a pass. Romo claims the Packers overloaded the defense to the run side, so he checked out of it to a pass. In the middle of the game that would be okay, but at this point of the game, given what had been transpiring, it wasn't a wise move. The Cowboys had been having success much of the game against overloaded 8-and 9-men boxes, Romo just tried to do too much. The unfortunate part is that the run play as called might have succeeded. Check out the visual. 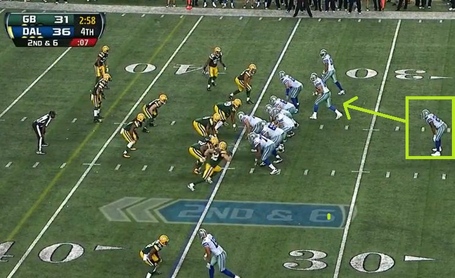 Romo checks out, but the Cowboys continue to block it as the original run, including Ron Leary pulling and DeMarco Murray heading to the handoff spot. It's hard to say what would have happened, but the Cowboys look like they have it blocked up well and Murray could have grabbed some yards. 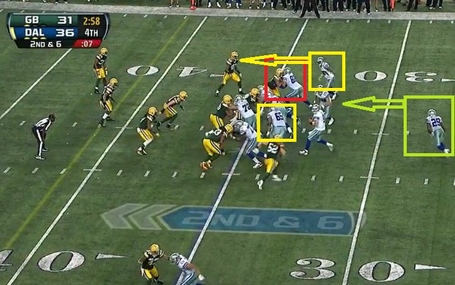 Regardless of whether the run would have worked and whether Romo should have check out of the play or not, Romo then goes on to make the killer mistake. After nimbly avoiding the Clay Matthews sack, Romo never gets his feet set. He's pointing the wrong way with his feet, throws across his body and falls off to the side after the throwing motion. 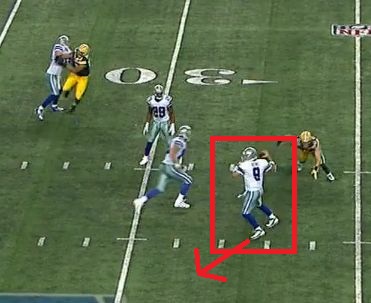 Romo did have Miles Austin open on this play, but with the poor footwork and lazy motion, Romo's pass doesn't lead Austin, instead it sails right back into the path of the trailing defender. Romo chose to change the play from run to pass, then when that worked by getting a man open, his poor footwork and lazy follow through doomed it to an interception.

On the second interception, there's plenty of debate about whether Cole Beasley stopped short on his route and caused the interception, or Romo didn't read the defense correctly and realize that Beasley should have stopped and sat down in the hole in the defense. But I'd like to focus on another aspect of the play. And that is Romo locking in on Beasley, and the Packers defenders knowing exactly where the pass is going. Here's the initiallook at the play: 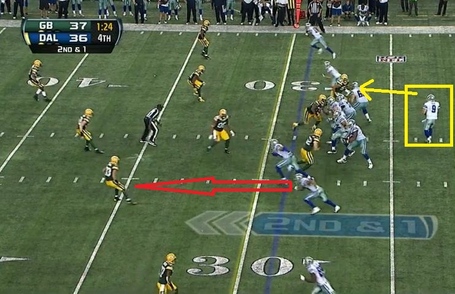 In yellow you can see that Romo is looking to his right, first with a quick peek at Witten at the snap, then immediately to Beasley, at no time on this play does he look to his left. Even though he has all day in the pocket with a three-man rush that isn't threatening him, he never surveys the field, basically locking in on Beasley. Meanwhile, to Romo's left, Miles Austin has a defender that is already bailing out with a full seven yard gap. As the play rolls on: 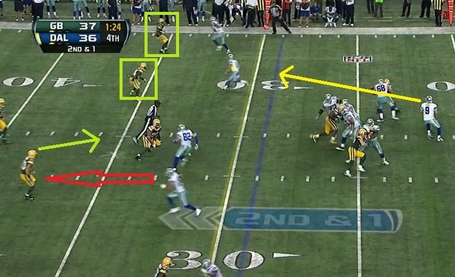 Romo is still staring down Beasley. Notice the two Packers defenders around Beasley, they are staring back at Romo. They know where the ball is going as Romo never bothered to look them off. Meanwhile the guy covering Austin is even looking that way because Romo hasn't bothered to look anywhere else. And still, there's no threat of a pass rush.

Now, I'll grant you that Beasley is open enough to make a catch for a first down if they don't get caught in confusion. But part of the confusion happens because the outside corner is sitting on the route because Romo never looks him off. Beasley sees this and settles into the hole. Meanwhile, on the backside, look at what Austin is dealing with...basically open field. 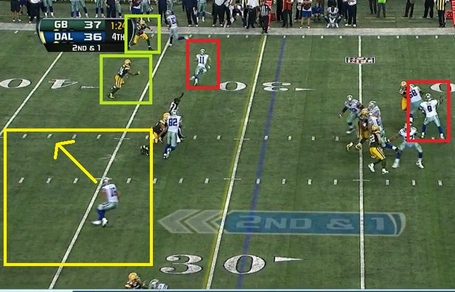 Again, Romo didn't make a terrible choice in throwing to Beasley. But his basic quarterback fundamentals failed him. Take a second to look off a defender. Survey the field for a quick second when you have a nice pocket and a three-man rush. Just like on the previous interception Romo's footwork and mechanics led to a terrible play.

Also, don't forget that Romo missed Dez Bryant three different times during the game for long passes that could have been touchdowns including one earlier on this drive.

Romo is not the sole problem in Dallas and many times he's one of the few bright spots in Dallas. But on this day, at these moments, instead of making great plays, he made bad plays. He's a better QB than that, but he has to start showing it.