A look at the film of the Packers game reveals why the defense collapsed in the second half.

Three big themes have come out of the Packers game as reasons for the Cowboys epic meltdown in the second half. In truth, many of the reasons behind the blame game are interrelated. But in general people have focused on the lack of running plays to melt the clock, Romo's interceptions and decisions to change run plays, and the defenses total collapse.

I'm not here to say one was more important than the other, but the reason for the collapse on defense is pretty obvious. I went back and watched the All-22 film of every Cowboys defensive play in the game. I was trying to find out what was so different in the second half from the first. Intuitively, many pointed to the loss of Justin Durant and then Ernie Sims right before halftime that left the Cowboys with a linebacker corp of Kyle Wilber, DeVonte Holloman and Cam Lawrence. After watching the All-22 film, these suspicions are confirmed, especially as it pertains to the play of Cam Lawrence.

There's plenty of debate about Tony Romo's role in the Cowboys run of mediocrity recently, and Sunday's game will only add to it.

Let's Look At The Numbers!

A look at the Cowboys agonizing come-from-ahead loss to the Packers on Sunday afternoon. By the numbers, of course.

Let's dispense with a few other issues first. The Cowboys were getting better pressure in the first half than in the second. The Cowboys front four got progressively worse as the game wore on. The Cowboys did blitz periodically through both halves, but rarely were they effective. The Cowboys did make more "splash" plays on defense earlier in the game, tackles for loss, pressure on Matt Flynn, etc. These dried up in the second half.

You also have to give credit to Matt Flynn and the Packers coaching staff. Flynn threw the ball much better in the second half, he was more accurate. But the big thing that happened was that Mike McCarthy and company looked at the Cowboys linebackers and decided passes over the middle and runs up the middle to off-tackle were the way to go. They utilized slants, crossing patterns, seam routes and passes to players out of the backfield to devastating effect. And more than anyone they targeted Cam Lawrence.

I don't want to bag on Lawrence too hard here, he gave a game effort. But the rookie was clearly out of his league after spending most of the season as a special teams player.

Situation 1: The Packers are mounting their comeback (score 29-17) but are facing a 3rd down and 3 at the Cowboys 15-yard line. A huge play if the Cowboys can force a FG and somewhat blunt the Packers momentum. But the Packers set up the Cowboys for easy pickings. 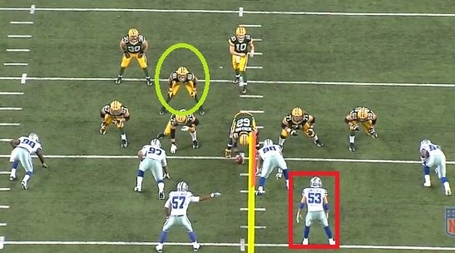 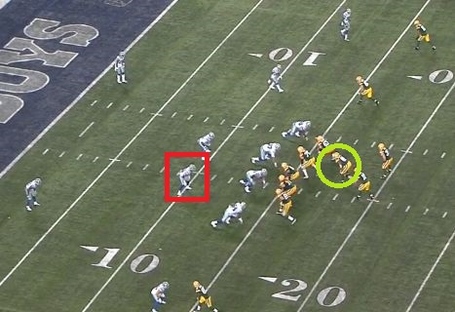 But the inexperienced Lawrence doesn't play situational football. With only three yards to gain he needs to press either Quarless or Kuhn coming out of the backfield. Instead, he drifts back (red box) even though Quarless (green circle) is the only receiver to enter his zone of coverage. The Cowboys have the three downfield receivers covered (yellow boxes). 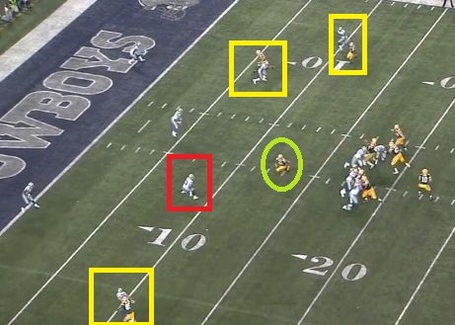 But Quarless is wide open for an easy pitch-and-catch and a first down. 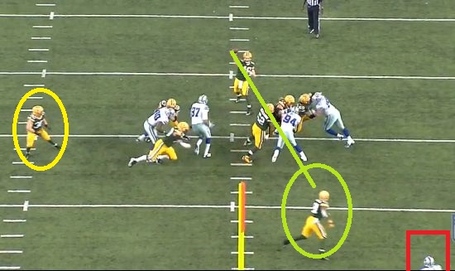 Kuhn is coming open on the left side of the graphic (yellow circle) but Flynn might not have the time to find him with Jason Hatcher coming up the middle. But since Lawrence is so tentative with his coverage (red box), it's a simple play.

Situation 2: The Cowboys are up 36-24 but the Packers have driven to the Dallas three-yard line. They put James Jones in the slot (green circle) with Lawrence playing inside/shallow zone (red box) and J.J. Wilcox with deep/outside zone coverage (yellow box). 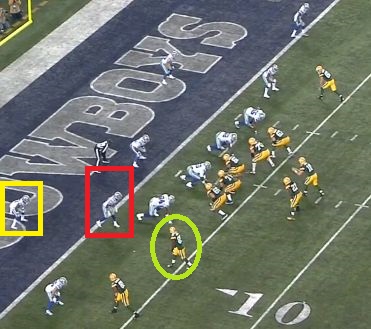 At the snap, Jones simply runs straight ahead a few yards and settles in the endzone (green circle). Matt Flynn is staring straight at him (yellow circle). Lawrence fails to sense Jones or react to where Flynn is looking, instead staying right in his spot (red square). The other three receivers are well covered by the Cowboys secondary (yellow squares), but Flynn fires and easy touchdown strike to Jones. 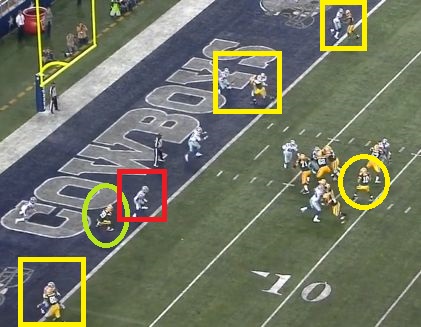 The Packers scored on a similar play to this earlier with Lawrence late to get over to cover the inside on a slant pass to Quarless.

I could have picked out various other plays where Lawrence was simply lost in coverage, but that would be repetitive. Suffice it to say, the Pack knew they had a weak player on the field and they exploited it.

Even in the run game.

Situation 3: Late in the game the Packers are driving for the game-winning touchdown. The initial formation with Eddie Lacy next to Flynn. 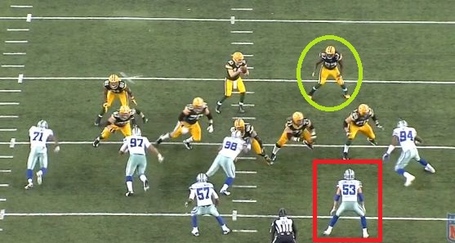 The Cowboys run a stunt with DeMarcus Ware crashing inside and Nick Hayden looping outside. Lawrence is the outside contain guy on the run. He gets fooled by Lacy's motion towards the middle for the handoff and takes a step inside and is unable to recover when Lacy heads outside. 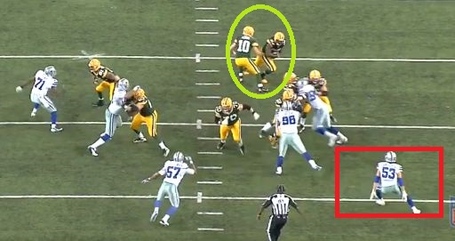 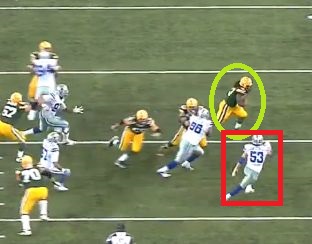 Lacy gets the corner on Lawrence and picks up nine yards on the run. 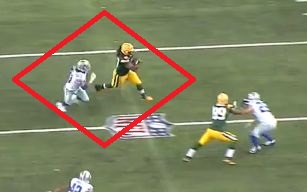 The Cowboys defense was forced to use Cam Lawrence extensively in the second half of the game. He just was not ready for prime-time and the Packers relentlessly exploited that. Fortunately, this week Bruce Carter should be back. And while I didn't fully scout DeVonte Holloman's play in the game, he looked to be okay from a general perspective.