The Cowboys showdown with the Eagles is still six days away, but we'll get a start on breaking it down now.

Share All sharing options for: Cowboys Playoff Hopes: Look Back To Look Forward

Usually I'll wait until Tuesday or even Wednesday to really start looking at next week's opponent. But this week, everything else just seems like prologue preparing us for the rematch with Philadelphia. So, to look forward to this week's game, we need to look back - all the way back to Week 7, Oct 20th, 2013.

That was the game when Dallas defeated the Eagles 17-3. The Cowboys defense gave up three points for a whole game? Surely this is nonsense! But it did happen, and this was against the Eagles who can put up points on the board. So how did the Cowboys defense manage to play one of its best games? To the film, my friends.

So let's start with a few observations before getting to the pictures. Nick Foles was just getting used to the Eagles offense and he only played three quarters before the Cowboys knocked him out of the game. So he wasn't nearly as proficient in running Chip Kelly's offense. He was also not nearly as accurate as he has been recently. Several times, the Eagles did manage to get receivers open but Foles threw errant passes. So the inexperience of Foles was definitely a factor.

But the Cowboys defense also played well. They used a lot of man-to-man coverage, even underneath with the linebackers taking the running backs. Bruce Carter had a nice game in coverage. DeMarcus Ware was out for this game but George Selvie and Jason Hatcher managed to create pressure. They also did it without having to over-commit to the blitz.

The Eagles offense is very good at executing screens, both to running backs and receivers. The Cowboys were very good at diagnosing the screens and the corners aggressively attacked the receiver. This limited what Philly could get out of that part of their offense. Dallas also limited LeSean McCoy in the running game with the safeties and linebackers being very patient in holding lane integrity and fighting through blocks.

All of that is nice, but if you have one Christmas wish for the Cowboys, it better be that Sean Lee returns for the game. [UPDATE: Unfortunately, just after I posted this article, word came out from ESPN that sources claim Lee has not been cleared to play, making it doubtful he'll play].

Lee was all over the field and was the single biggest reason the Cowboys were able to hold down the Eagles offense. Let's look at some of the reasons Lee helped Dallas' defense dominate the game.

1. Knowing the play. Lee is great at studying film and diagnosing plays. In addition, he helps to keep the Cowboys lined up properly. Look at Lee below pre-snap (red box). He sees the alignment and knows it's a run to the Eagles right (LeSean McCoy, green circle). Lee is telling his running mate Bruce Carter (yellow box) to slide over. Sure enough, Lee read the play and the run was stuffed.

2. Helping in pass coverage. I loved what Lee was doing in pass coverage. The Eagles were trying to run pick plays across the middle, and also just plain crossing routes. Lee did the smart thing, instead of trying to turn and run with the receivers, if they were within five yards of the line, he would just pop them and knock them off their route. Below, Lee (red box) is lining up the crossing receiver (green circle).

Check out what Lee does. Not only does he hit one receiver and messes up his route, he impedes the other crossing receiver and throws off the timing of that route (red box). This play ended in an incompletion. 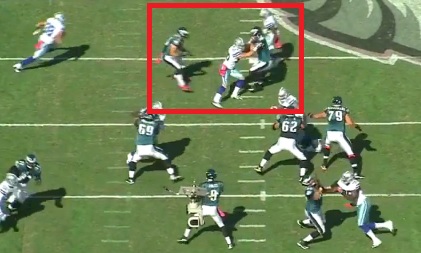 But Lee avoids Kelce's block and steps right into the hole (red box) and limits the play to a short gain. 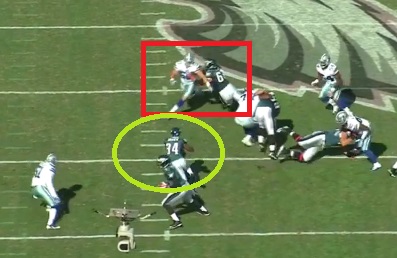 4. Overall run defense. Lee helps keep everybody doing the right thing while also performing brilliantly on his own. Below the Eagles are running the ball to their right (green circle and arrow). The Cowboys are in nickel (which they ran the majority of the game) with Carter, Lee and safety Jeff Heath as the linebackers (red boxes).

The linebackers are patient and maintain their lane integrity. One of the worst things linebackers can do against a shifty back like McCoy is commit to early and get caught up in the scrum. Instead, Carter and Heath maintain good spacing while Lee fills the hole and takes on the block (red box). This turns McCoy inside (green circle) where Carter is waiting (red box and arrow), holding the Eagles to another short gain.

The Cowboys defense played an unbelievably good game against the Eagles. Sean Lee was the key, but playing the man-to-man scheme along with solid discipline also played important roles.