As the Cowboys complete their final preparations for their Week 17 Sunday Night match up with the Philadelphia Eagles to determine the NFC East Champion, let's take a quick look at the under-appreciated group in Philly, their defense, particularly the front seven.

By now everyone knows the situation, the Eagles are 9-6 with one of those losses coming to the 8-7 Dallas Cowboys. With a win on Sunday night, either team can claim the NFC East championship and live to play a home playoff game next week. Many people this week will be talking about the Eagles offense, led by Nick Foles at QB with the most dangerous weapon, Lesean McCoy, at RB. However today I want to talk about a group that isn't being talked about nearly as much but could have a huge impact on this game, the Eagles defensive front seven. Coordinator Bill Davis' defense bases out of a 3-4 alignment, with Cedric Thornton and Fletcher Cox at the DE spots and rookie Benny Logan at the nose. Free agent acquisition Connor Barwin plays SOLB spot with former 4-3 DE Trent Cole playing the WOLB. Veteran DeMeco Ryans and 2nd year guy Mychal Kendricks play the ILB positions.

Today I want to focus on a pressure look the Eagles showed in their 54-11 demolishing of the Chicago Bears last Sunday night. 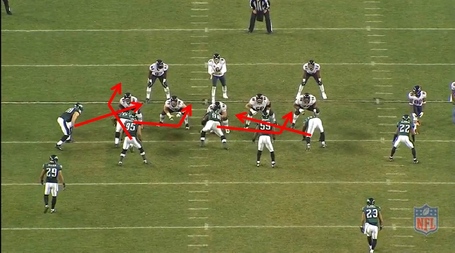 Here we see the Eagles with nickel personnel on the field, as their slot CB Brandon Boykin (22) replaces DE Vinny Curry, creating a 2-4-5 defensive personnel grouping for the Eagles D. We see that OLB's Barwin and Cole are essentially a 3rd and 4th lineman (Cole even has his hand down in a rush stance). The look from Davis' group is a 5-man pressure, with two twists. On the defenses right, Cole, and Logan execute a twist where Cole crashes down inside to the A gap, and Logan loops around to the contain rush lane.

Scouting The Eagles: Defense Is Vulnerable

Though it's not as bad as it was earlier this season, the Eagles defense can be exploited.

Scouting The Eagles: Defense Is Vulnerable

On the opposite side we see both Cox and Barwin scooping inside one gap to the A & B gaps respectively while Kendricks, the ILB, rushes around the corner. Kendricks is a guy who runs and moves extremely well, so even though his rush is slightly delay because of the long path he has to take all the way around the edge, he is able to sharpen the corner and in this case get the sack on QB Jay Cutler and force a fumble (recovered by Chicago).

With as well as the Cowboys offensive line has played in recent weeks, even against 3-4 teams (playing three in a row - Packers, Redskins, and now Eagles) which they struggled with early in the year, you have to expect that Davis will attempt to crank up the pressure on Kyle Orton in the pocket by dialing up these types of movement pressures. These types of pressures happen to be the one thing we've seen guards Mackenzie Bernadeau and Ron Leary struggle with through the season.