In this week's summary of NFL power rankings, we look at how far the Cowboys rise after the win over the Raiders, take a look at where the NFC East teams are ranked, and check out where the Bears come in on the various power rankings published today.

Here's a rundown of the many power rankings published today and their take on where the Cowboys rank this week.

BeatGraphs.com: 7th (7th). BeatGraphs provide rankings that cannot be defeated by a chain of A beat B beat C scenarios. In the end, when all ambiguity is removed, if A has beaten B, A will be ranked above B. And because Beatgraphs lead our rankings, here's their glorious graphical representation of the Week 14 power rankings: 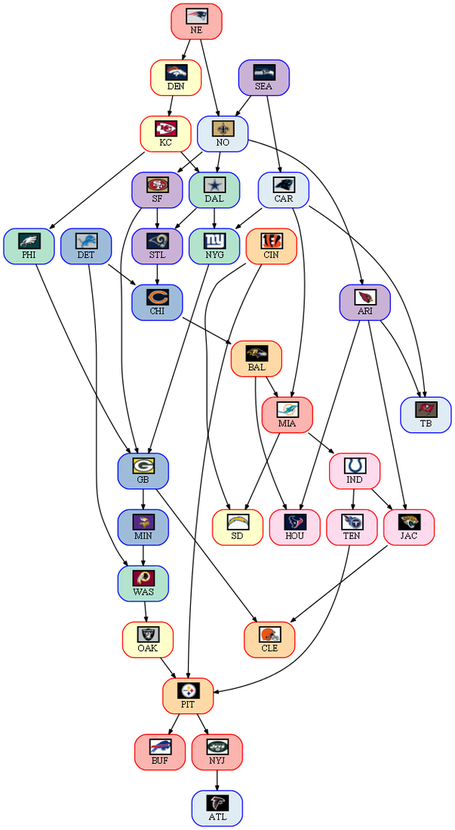 Massey-Peabody: 8th (8th). These guys generate their predictions by working up from play-by-play data to calculate a performance figure for rushing, passing, scoring and play success.

Covers.com: 9th (8th). "For the entirety of his NFL career, Cowboys QB Tony Romo has led his team to a 24-5 SU record in November. For December and January, however, he's just 12-20 straight up!"

Teamrankings.com: 9th (8th). This site measures the relative strength of all teams using team performance, home/away status, margin of victory and other factors.

ProFootballTalk: 9th (10th): "After throwing up on game day, Tony Romo now knows what it feels like to be a Cowboys fan in December."

CBSSports (Kirwan): 10th (11th): "Dallas has three very winnable games in a row starting this week -- Chicago, Green Bay, and Washington -- before it finishes in a head-to-head with Philly, most likely for the division title. The Cowboys already beat the Eagles once which will help if they don't slip in the next three weeks."

WEEI.com: 10th (11th): "December has arrived, and we know Tony Romo is no Tom Brady when it comes to the last month of the year."

Blogging The Boys (Your favorite blog): 11th (11th). "The Cowboys are 5-2 over their last seven games, and are getting key starters back healthy for their stretch run. Can they hold off the Eagles?"

Drafttek: 11th (11th). "Back to a tie for 1st in the NFC Least . . . despite spotting the Raiders an early TD on the opening kickoff, da 'Boys churned out a Turkey Day win, blue jerseys and all. With 10 days to get some more players healthy, perhaps a December swoon is a thing of the past!"

NFL.com: 12th (13th). "Nice to see the Cowboys giving their quarterback support with some semblance of a ground game. Dallas ran the ball 30 times for 144 yards, with Lance Dunbar providing a cup of the kind of explosiveness that DeMarco Murray does not. Cowboys fans like Murray, but there is no denying the punch Dunbar gives this team."

M-Live: 11th (11th): "After throwing five interceptions against Chicago last season, Tony Romo will be looking for some revenge on Monday night."

CBSSports.com (Prisco): 11th (12th): "The Cowboys head into the final four weeks atop the division. Can they stay there with that defense?"

ESPN: 11th (12th): "Oakland had seven rushes for no gain Thursday, tied for the most by Dallas' defense this season. The Cowboys allowed a league-worst 5.1 yards per rush entering Week 13."

Bleeding Green Nation (Eagles): 11th (12th). "Struggled early on Thanksgiving against a team with Matt McGloin starting at quarterback, but found their rhythm and put the game away in the second half."

Foxsports: 12th (12th): "The Cowboys' seven wins this season have come against opponents with a combined record of 28-49-1. The Eagles (7-5) are the only team with a winning record that Dallas has beaten."

WhatIfSports.com: 12th (13th). These guys simulate every possible match-up in the NFL 100 times, and use the winning percentages from those nearly 50,000 games to evaluate every team, with updated rosters and depth charts.

Peter King: 12th (15th): "For years, some in the league have grumbled that the Cowboys have an unfair advantage by playing on Thanksgiving at home every year. That’s true; playing at home in an exceedingly short week when the other team always travels is a big edge, as is what Dallas has now: the ability to give its players four full days off, plus an extra day before playing a Monday-nighter next week at Chicago."

Shutdown Corner: 13th (16th): "I’m rooting for them to make the playoffs because their great offense/no defense combo would make for a fun game. Doesn't it feel like it would be a 38-35 game with Tony Romo holding the ball at the end?"

Football Outsiders: 14th (12th). FO have the Cowboys with the 10th-ranked offense, the 27th-ranked defense and the 9th-ranked special teams.

ColdHardFootballFacts: 15th (17th). This indicator ranks teams based on their average ranking across a range of CHFF's Quality Stats.

Oddsshark: 16th (15th). Oddsshark use a multitude of stats to establish an offensive and defensive power ranking, which they then adjust for the strength of schedule.

The table below summarizes the power rankings for the four NFC East teams plus the Cowboys' next opponent. We'll update the missing rankings as they become available.