As the Cowboys end their extended rest/preparation time for their Monday night match up with the Chicago Bears, lets look at a few things we should expect to see from Marc Trestman's team in the bitter Chicago cold on Monday night.

The Chicago Bears are a 6-6 team that is playing with their backup quarterback who has played extremely well. They are also without several very important players on the defensive side of the ball that has turned what was a proud group under former defensive coordinator and current Dallas Cowboys defensive line coach (Thanks Bears!) Rod Marinelli into a porous unit. Let's look at somethings we should expect to see in the game. 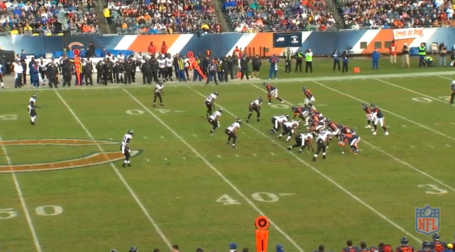 As you can see the angle of the film shot at soldier field is extremely low, which makes this process somewhat painful, so let's go to chalk board and see the scheme I want us to analyze. 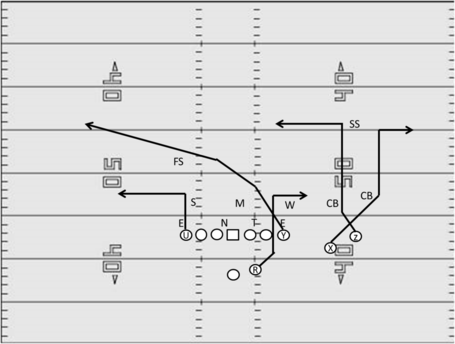 In this case, the personnel is as follows.

Cowboys/Bears: Crazy Predictions That Will Happen

The BTB writers go beyond the standard predictions with some crazy calls for the Cowboys @ Bears game. Could any of them really come true? 200+ yards for DeMarco Murray? 100+ yards for Cole Beasley? See all the madness.

The Playoff Picture For Dallas After Sunday

The Cowboys didn't get much help from the rest of the league on Sunday in their quest to make the 2013 playoffs. We check in on the action and find out what it all means for the Cowboys playoffs chances.

Cowboys/Bears: Crazy Predictions That Will Happen The Playoff Picture For Dallas After Sunday

They are aligned in an Ace-Gun Slot formation, which moves the X receiver from his normal position on the left side to the slot on the right side. As has been said before in multiple places, one of the main objectives of Trestman's offense is to throw the ball on inside breaking routes, specifically targeting the areas between the numbers and the hashes. This particular look is designed to get Marshall open on his dig route against almost any coverage.

By crossing paths with Jeffery, Marshall has a rub that helps him get separation vs his man if the defense plays Man-Free (Cover 1), Blitz Man (Cover 0), or Man Under (2-Man), while the deep crosser by Bennett, pulls the Mike LB out of the middle in Cover 2, and Forte's out route from the back field forces the Hook-Curl defender in cover 2, or the Curl-Flat Defender in Cover 3 to widen his position leaving a clean throwing lane for Hanie to make a clean throw to Marshall near the hash.

The Bears run game is built around RB Matt Forte, who is one of the NFL's most under appreciated players by fans. He is truly a threat in all phases of the game and is a dynamic play maker, we will see all the base run plays we have talked about in other posts (Leads, Draws, Sweeps, Inside Zone, Outside Zone etc) from Forte in the Bears base run game, however, what I want to highlight here revolves around Trestman's creativity in play design and yet another way he gets the ball into the hands of his big time play-makers at the WR position. In fact, Alshon Jeffery, who gets the carry here, has 14 Carries with an average of 8.2 YPC for a total of 115 Yards, so he has averaged just over 1 carry per game. 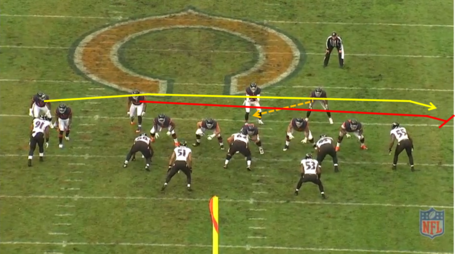 Here we see that Trestman uses the threat of Forte to create full flow to our left (offenses right), he blocks this play with his OL just like an inside zone gun draw to Forte, however, the QB holds on to the ball, turns his back to the D and hands off to Jeffery who is coming around the corner with a lead blocker and a bunch of defenders running the opposite way. The only two players going to the defenses right are Jeffery and the H-Back. So all the defenses keys say inside run to the left, and very quickly the ball pops to the right in the hands of a WR. With the weather expected to be bad, and big plays likely to be hard to come by due to the elements, you can count on Trestman getting the ball in Jeffery's hands in the run game at least once. 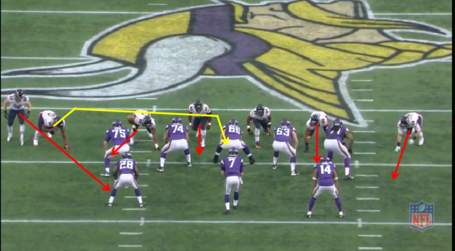 Here we see the Bears Defense in a familiar look, with four down linemen in their "Green" alignment which features both DT's playing a 3-technique rather than a 1-technique and a 3-technique, and in this case the Bears' LBs are "sugaring" the A-Gaps and safety Chris Conte is walked up to the LOS off the edge to the offense's left side.

On this third down snap, DC Mel Tucker is sending six after QB Christian Ponder. Four of those six rushers are coming to the left of the center which is where the key to this look happens. On the back side we have the DT and DE both rush in their mandatory rush lanes off the outside shoulder of the OG and OT respectively. Then on the front side, Conte rushes off the edge, which attracts the attention of RB Adrian Peterson in his blitz pick up, while the DT and LB to that side each angle their rush to the outside, DE Julius Peppers then arcs around 2 gaps to attack the A-gap, and we can see the result below. 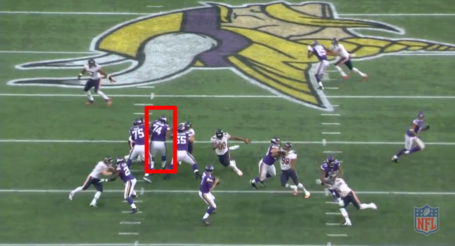 When Ponder reaches the top of his drop, we see that the center was pulled to his left by the early threat from the ILB, and Peterson has stepped out to block Conte, the left OT is blocking the DT, and Peppers has rounded the corner coming right up the middle into Ponders lap unblocked. While the left OG (in the red box) stands there looking around for someone to block. The resulting sack forced a Minnesota punt to get the ball back for Chicago's explosive offense.

The goal of most pressure packages aren't necessarily to out number the defense as a whole, but rather to force the OL to react one way and bring additional rushers to the weak spot in the protection, while leaving O-Linemen with out anyone to block at the strong point of the protection scheme.

This game will be a challenge for both team's on both sides of the ball. On defense both units will struggle to shut down the weapons on the opposite side, and offensively, the weather conditions will present a greater challenge than either defense is likely to. Inclement weather lends itself to close games as it closes the talent gap so to speak, and I believe this game will be close. This is a situation in which I am very thankful to have Sean Lee back, and extremely happy that Dan "SPLIT 'EM" Bailey is on our team and not their's because if it comes down to a field goal in the wind, I like his chances.