In the previous article in this series, I noted that it was likely that a large portion of the playbook I was referencing was missing. These suspicions were confirmed when a BTB user (who has chosen to remain anonymous) emailed me the remaining portion. Thus, I present to you the remaining base coverages of Monte Kiffin's defense.

When last we met, we were examining the first base coverage scheme in Monte Kiffin's repertoire, the Over 2. For the sake of completion, here are those images once more: 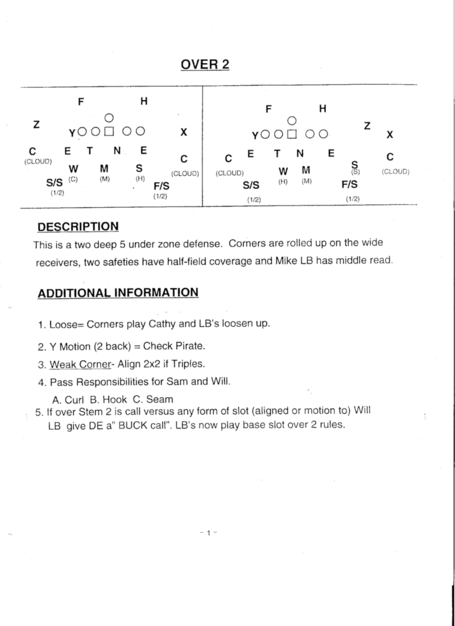 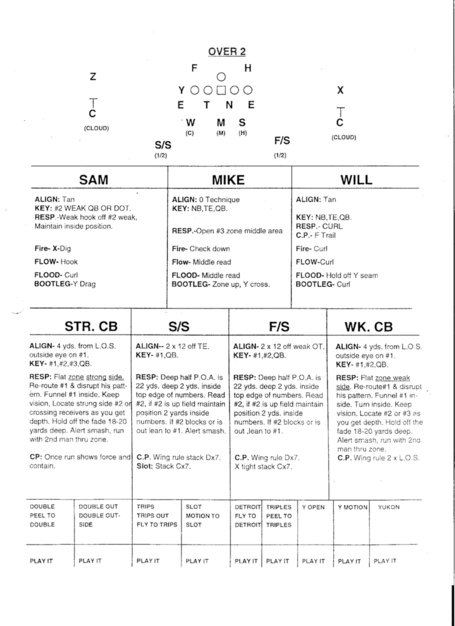 Next in Kiffin's arsenal is the Under Pirate 57. 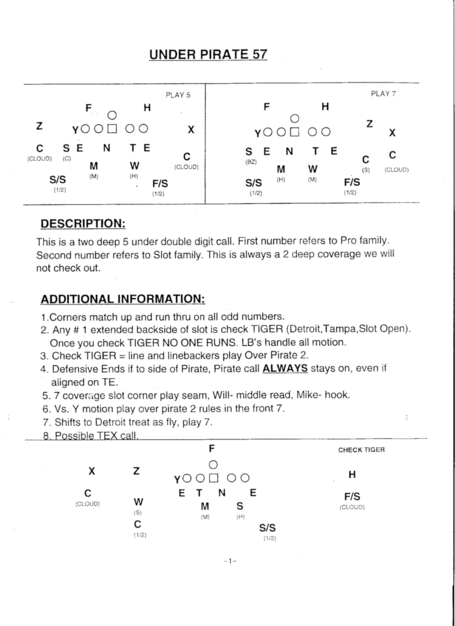 The description is somewhat cryptic at first glance, but allow me to explain. When the play is called, the coordinator is already aware of the personnel group the offense is using (the player substitutions are watched very carefully throughout the game). Thus, when this play is called, it is known that there are only two receivers in the game for the offense.

Two receivers can line up either in "Pro" or "Slot" styles, where the former refers to one receiver on each side and the latter designates both receivers on the same side.

The Additional Information can largely be understood by referring back to the line stunts and check calls I previously posted, but some additional information follows:

Point 2: #1 refers to a number one receiver, ie the team's star at the position. The 'TIGER' check is explained on the next line. 'NO ONE RUNS' means that corners will not follow the receivers if they go into motion - this is likely to prevent a disadvantage caused by the offense snapping the ball while the defense is caught in complex shifting (which is something offensive coordinators will always try to exploit when possible).
Point 4: Simply says that the Pirate stunt will never be called off.
Point 5: This is just a summary of the middle of the diagram for play 7.
Point 6: 'Y Motion' is when the tight end goes into motion, typically across the formation.
Point 7: 'Detroit' is the formation shown in Play 7, except the 'H' back shifts out wide of the tight end and the 'F' back drops inline with the quarterback. Essentially it's an attempt to match up a back in space with a safety or linebacker, and I have a strong suspicion it's name has to do with some Barry Sanders guy who would've excelled in that situation. 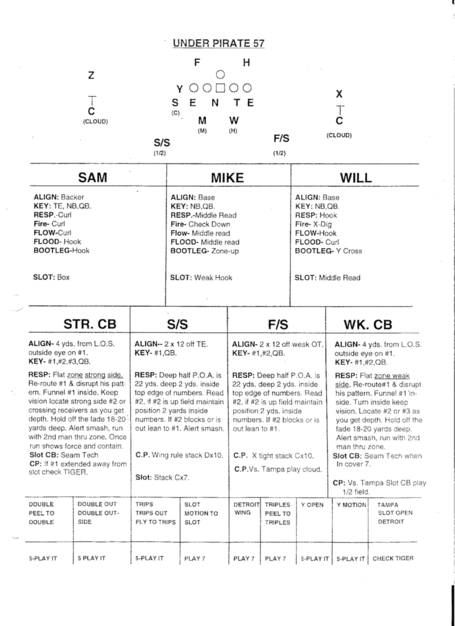 These are all fairly straightforward explanations. There are only two points of clarification:

Second, then you see something like "Vs. Tampa" or "Vs. Tampa Slot" this isn't referring to games against a specific team (especially obvious, as this is a Tampa Bay playbook). More often, city names are used to refer to offensive formations that have been named after teams of the past that popularized them. "Tampa" refers to a two-back, three-receiver set (Kiffin refers to this as "Opal" personnel) featuring trips to one side and a single back wide to the other side.

Also, the chart on the bottom is a quick reference for reactions to specific alignments like the "Tampa."

There's a sub-set of Under Pirate 57: Under Tag 57. It is very similar to Under Pirate 57, and is treated as such in the play book. It's documentation should be intelligible to anyone who read through the Front 7 technique/game descriptions earlier in this series. 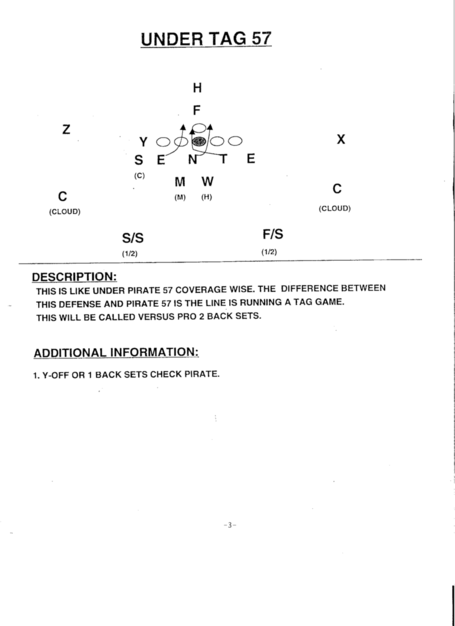 Before anyone says anything about the rarity of two-back sets in today's NFL, let me preempt that thought. The defensive playcall is made after the offense substitutes. You do not call a defense and then hope that the offense calls a personnel set that you can match up with; you see who the offense has out there and you field players that can stop them.

If two backs are never used against us, then a two-back defense will not be called by us.

Side-note: this is why 12 men in the huddle is a penalty; it's not because they think 12 men will somehow be able to create some form of intelligence beyond that of 11 men which will lead to a higher understanding and superior execution on the following play and thus an advantage. 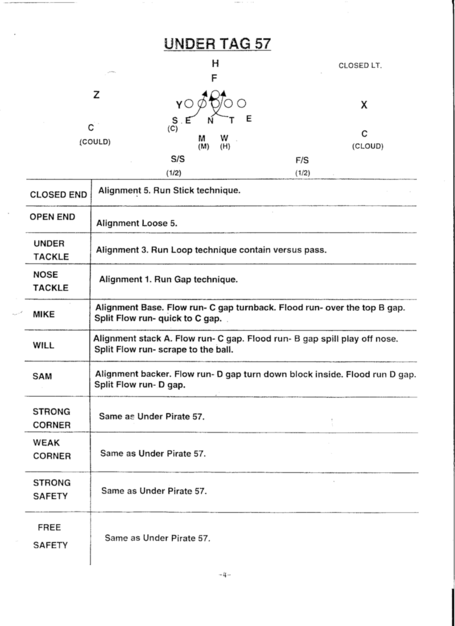 The next full-fledged coverage on the menu is Under China. I'll go ahead and apologize for the fact that the name likely originated from some form of ignorant stereotype; football terminology hasn't ever been too politically correct, especially terms that originated a half-century or so ago. 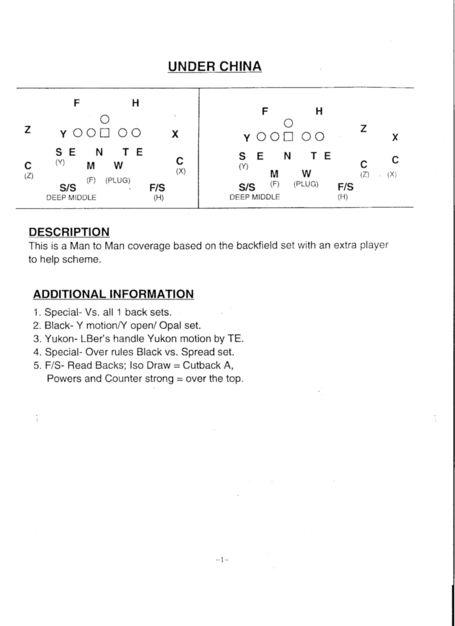 This formation is man-to-man coverage (remember how some of you were worried we wouldn't get any of that?). The two remaining defenders, the Will and the Strong Safety, form into a Cover 1 Lurk alignment, which amounts to a single deep middle and single short middle zone. The 'lurk'er is meant to pick off the short crossing routes that typically abuse man-to-man coverage when the corners don't have deep help. The single deep safety gives the corners an extra drop of confidence to jump routes within reach. 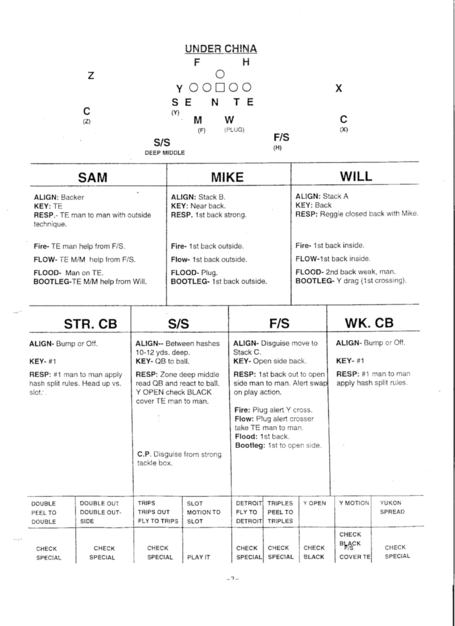 By now I'd like to believe we've all grown accustomed to referencing these. There isn't much for new terminology here, and man coverage is quite self-explanatory. 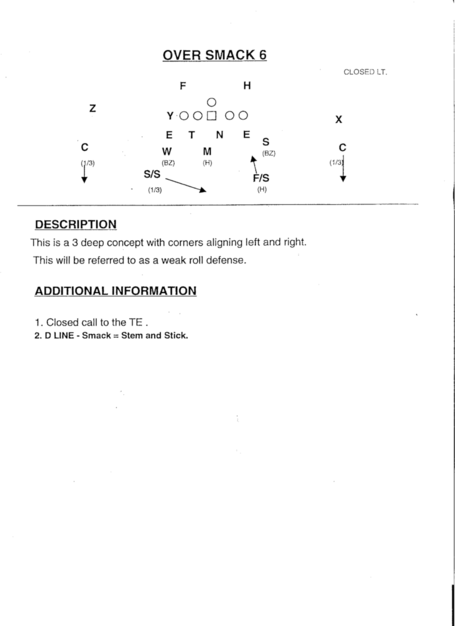 Nothing crazy here, apart from the designation of a special call, 'Smack.' 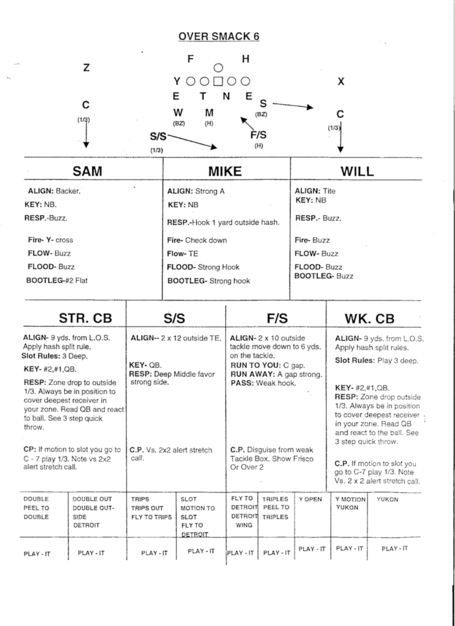 Once again, the coverage is explained, in detail, using terms we've already learned. The relative ease with which (I hope) we've been able to go from unfamiliar to fairly comfortable with this information should be indicative of how easy this defense will be for our players to learn.

Just for the sake of completion, I'll re-attach the breakdown of zone coverages areas of responsibility here, for reference while viewing these coverage instructions. 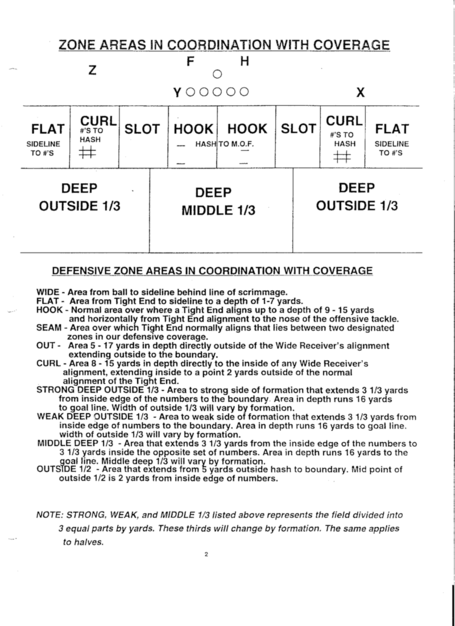 Finally, I'd like everyone to discuss these things. A number of you likely understand these things better than I do, and I welcome you to share that with the rest of the community. If there's more you'd like to know about these formations, ask and I'll provide additional information (if I have it). I have skipped over quite a few pages, in an effort to avoid uploading all 120-something pages.