As hundreds of NFL prospects descend on Indianapolis to be measured, assessed and tested, we provide you with some useful information on what those strange drills actually test. Here, in the second installment of our Combine Primer series, we take a longer look at the position-specific drills for offensive personnel.

In part one of this series, I took a closer look at the NFL Scouting Combine drills in which every player would participate: 40-yard dash; vertical and broad jumps, shuttles and cone drills, bench press. In addition to these general speed, power and agility tests, each prospect participates in a set of drills designed to assess the necessary skills for his specific position. The results of these drills tend to be overlooked by the general public, since the general assessments like the 40 make for better television. A fan needn't be supremely knowledgeable to compare 40 times; making distinctions between linebacker candidates during a pass drop and hip rotation drill, however, requires a sharper or more experienced eye. So, while the casual fan may pass on the individual drills, you can be sure that scouts don't; they watch these very carefully. And since you, loyal BTBer, are anything but a casual fan, you'll need to know that these drills are and what exactly they test.

We'll churn these test previews out just before the position groups in question begin to do the drills in question. Since the Combine begins with the offense, so will we. We'll then review the defensive drills this weekend or early next week. And, away we go:

The quarterback drills are primarily a way for each prospect to showcase his physical skillset. NFL scouts want to compare prospects' footwork, delivery, the quickness of his release, and his arm strength. To do so, they'll have each prospect work out of a progressive series of dropback depths (three-, five- and seven-step drops), throwing each of the routes on the basic "route tree": a slant, an out, an in, a deep corner and a go-route. They will also ask QBs to throw while rolling out both to the right and left.

In these passing drills, scouts focus on a quarterback's footwork, his ability to read a receiver as he's dropping back and how well he plants and drives through the throw. Given the speed of NFL defensive backs, a premium is placed on arm strength. If a candidate displays superior arm strength (often we hear that such a guy "has an NFL arm," which really means he can zip a deep out), look for him to be raised in scouts' estimation. Also, scouts are looking to see how the ball is released from the prospect's hand and how he "spins it" - i.e., how the ball projects into the air (the tighter the spiral, the fewer concerns scouts have about the ball fluttering, which is especially important for northern teams with windy outdoor stadiums, such as Buffalo and New York). As with speed, the thinking goes, you can't coach arm strength, so it's a precious resource.

Offensive linemen are required to engage in a series of drills intended to test their foot speed, hip rotation, balance, acceleration, and change of direction. Coaches will have them perform a "hip rotation drop," in which they scoot backwards for 15 yards rotating their hips from side to side. A pass protection mirror-slide drill will test foot speed and change of direction. A "wave drill" requires that players get up from a prone position and then, when the coach moves the ball, start moving their feet, shuffling in the direction he moves the ball. In addition, O-linemen will participate in various "pull drills" in which they simulate pulling and engaging with an opponent.

That said, the most important of the OL-specific drills are the pass rush drops. As the league becomes increasingly pass-happy, teams are placing an ever-higher premium on capable left tackles with pass blocking ability. The drill that measures their ability to protect high-profile quarterbacks by keeping up with the Von Millers of the world is the kick slide drill, which ascertains an offensive tackle's ability to slide outside without losing balance or strength.

Scouts ask linemen to get into a two- or three- point stance, open up at a 45-degree angle and opposite a defender. The prospective OT slides along and follows the defender outside of a cone placed 12 yards behind the start of the play. The most successful candidates will keep their balance, maintain their base (i.e., keep their legs underneath their upper bodies), and demonstrate a natural bend in their knees, without diminished power and aggressiveness. Here is a diagram to illustrate what I'm talking about: 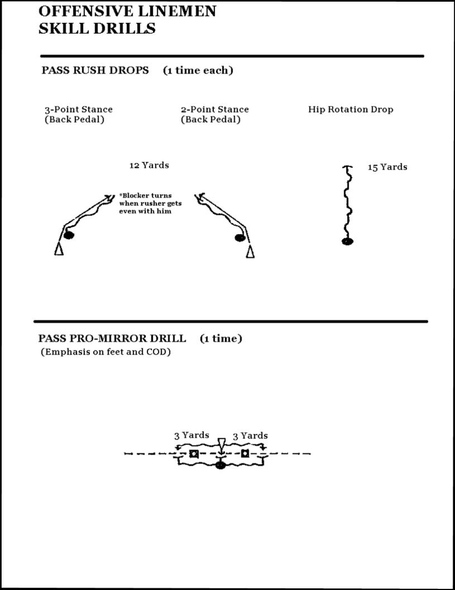 The principal running back drills ask the prospect to start in a two-point stance, take a handoff and navigate over bags or between cones, until he arrives at a coach moving a bag left or right. The back must simulate a cut by quickly reacting in the opposite direction from that in which the coach moves the bag. In an alternative exercise, the back takes a pitchout, simulates an end run and, once he gets to the "second level" weaves through a set of cones as if negotiating downfield traffic. Here they are in diagram form: 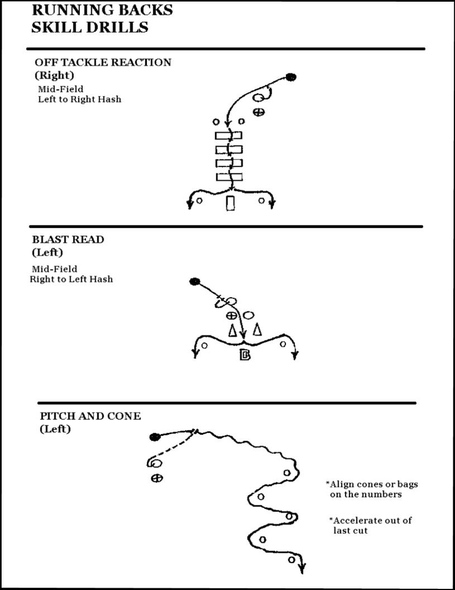 These drills help scouts to evaluate reaction time, to determine what kind of "burst" a given back possesses (i.e., how fast he can get to full speed), how quickly he makes cuts, and how well he maintains his balance while doing these. As fans of the Cowboys know all too well from watching Emmitt Smith throughout the 90s, the most important characteristic a good back can have is vision; sadly, there is no Combine exercise can measure this. Scouts will have to go to the tape to evaluate how well a back sees plays develop.

Lastly, running backs are asked to run their particular "route tree": flat, circle, corner, flair and flat and up.

Prospective wideouts are asked to engage in a series of drills designed to test their ability to run routes, make cuts, adjust to thrown balls, and demonstrate bodily control. Specifically, there are sideline "tap-tap" drills in which they make a catch and then tap their feet inbounds. Then they are asked to locate and adjust to over-the-shoulder throws. Of course, they are asked to run the entire route tree, testing their ability to run all the patterns that scouts expect quarterbacks to throw.

Perhaps the most well known of any of the position-specific Combine drills is the "gauntlet," a drill that NFL teams also use in their off-season training. The drill is brutal, and therefore makes for excellent TV. First, the receiver catches a pass, drops the ball, spins around and catches another and drops it. Then, he has to run along a straight line and catch five passes from quarterbacks lined up on both sides of him 12 yards apart, with the throws alternating on opposite sides of him-all while he's running full speed across the field. Here are the diagrams: 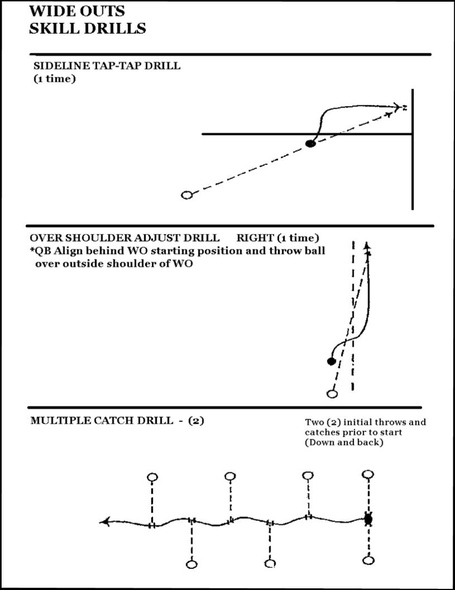 The gauntlet, shown above as the "multiple catch drill," is a great measure of focus and concentration. Receivers need to look the ball into their hands and then instantaneously move on to a different target, for a total of seven catches. Further, it shows how well a receiver can maintain his body and speed as he runs in as perfect a line as he can, while focused on the various throws (as opposed to maintaining a straight line). As Mike Mayock pointed out recently, coaches hate this drill, as it runs counter to everything they preach about ball security, but scouts love it, as it provides them so much information about a prospect's hands. Because receivers don't have time for the ball to come into their bodies before the next ball is coming, it allows them to demonstrate how well they can make "hands" catches. Hands catchers tend to drop far fewer balls, and are better at extending to make tough catches, so scouts value this skill highly.

As you might expect, tight ends perform a combination of offensive line and wide receiver drills. First, they are asked to participate in basic blocking drills, in which their explosion off the ball, against tackling dummies, is tested. Here, scouts look for hip flex and hip explosion, characteristics TEs will need when helping out in the running game against bigger defensive ends. Then they, too, run the gauntlet, as well as the tight end tree: flat, hook, flat and hook, 14-yard in and out, and corner routes.

Want to know more about each of these drills? The NFL Network's resident draft guru, Mike Mayock, offers a nice video breakdown here. Click on "workout drills" to hear him opine on the general tests; click on "position drills" to get his input on the position-specific drills. Armed with these, you can, like the nerdiest of the draft nerds (guilty as charged), become an expert in the confines of your living room: superglue yourself to your TV, brew a vat of coffee, and absorb the NFLN's week-long, around-the-clock Combine coverage!