Brush up on your capology skills in anticipation of the various moves the Cowboys will make in an effort to get under the cap.

As the NFL heads into free agency, many teams have to do some creative accounting to get under the salary cap on March 12. For most teams, this will mean restructuring contracts, signing cap-friendly contract extensions, asking players to take pay cuts and downright releasing players. The Dallas Cowboys will likely have to do a little bit of everything to get under the cap.

As is often the case when so many different options are on the table, there are lots of numbers flying around about player salaries, prorated signing bonuses, dead money, cap hits and more. And as is wont to happen with a topic as complex as the salary cap, many of the numbers being floated are not entirely accurate. To remedy that, we'll look at the basics of salary cap management today.

The salary cap, which this year will likely be around $122 million, was designed to limit the amount of money a team can spend on player salaries. But teams quickly recognized that the best way to stay under the cap was by working around it. One way of doing this is by backloading contracts and pushing the big salaries into future years with the expectation that a rising cap in future years will create more room under the cap. These type of backloaded contracts are what we consider a "cap-friendly" contract.

CBA, Article 16, Section 6, Paragraph 5: Proration: The total amount of any signing bonus shall be prorated over the term of the Player Contract (on a straight-line basis, unless subject to acceleration or some other treatment as provided in this Agreement), with a maximum proration of five years, in determining Team Salary and Salary.

Let's look at an example: let's assume a player signs a 5-year, $30 million contract, $10 million of which are the signing bonus. For salary cap purposes, that contract could look as follows:

The player gets his $10 million signing bonus immediately, but the full amount of the signing bonus doesn't count against the cap immediately. Instead, it is prorated over five years. In this example, that adds $2 million to the players cap amount for each of the five years of his contract.

To get a cap-friendly contract, the team lowers the player's base salary to the vet minimum (in this case that would be $1 million) in the first year, increases the base salary to $4 million in the second year and then to $5 million per year for the remainder of the contract.

In salary cap terms, the team has gotten two years from the player at a relatively cheap price, but paid for that with a higher cap hit in the later years of the contract.

Let's now assume that after the 2012 season, the team decides it is unhappy with the contract. This can be for any number of reasons: the team needs cap space in 2013, the player is underperforming his contract or some other reason. This happens to NFL teams all the time. The Cowboys find themselves in this position with a number of contracts this offseason. And like all other teams, they have basically three options: restructure the contract, cut the player or renegotiate the contract. All of which we'll look at below.

In our example above, the player counts $7 million against the 2013 cap, with a $5 million base salary and a $2 million prorated cap charge from the signing bonus paid out in 2011. But the team wants to create more cap space, so it restructures the contract by converting $3 million of the player's 2013 base salary into a signing bonus. 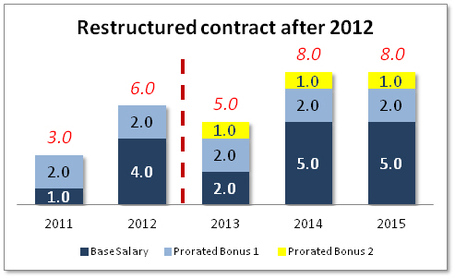 By restructuring the contract, the team has lowered the player's 2013 salary from $5 to $2 million. The signing bonus (marked here in yellow as 'Prorated Bonus 2') is prorated over the remaining three years at $1 million each year. Versus the original contract, the team lowered its 2013 cap charge from $7 million to $5 million, but increased its cap charge for 2014-15 by $1 million each year.

This type of contract restructuring is a no-brainer for the player. He doesn't lose any money at all, and even gets an immediate signing bonus. However, the NFL language is pretty sloppy when it comes to restructuring contracts, because the word 'restructuring' is also often used to describe a situation where a player is asked to take a pay cut, which should accurately be called a renegotiated or reworked contract.

In this situation, the team is unhappy with the contract it has signed with the player, and asks the player to take a pay cut. This goes beyond a simple restructuring of an existing contract. The two sides, team and player, have to renegotiate and agree to a new or reworked contract at a lower salary. This is what that could look like in our example: 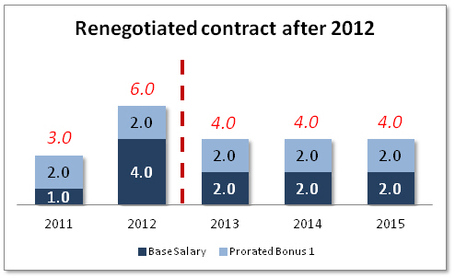 This is fairly straight forward. The team and the player agree to cut his base salary from $5 million to $2 million, saving $3 million in cap space in the process. Importantly, the team remains on the hook for the cap hit from the original signing bonus. If the player doesn't agree to the proposed pay cut, the team has the option of releasing him or trading him.

If a player is cut before the end of his contract, the entire unamortized signing bonus money (the remaining prorated bonus money) accelerates immediately and counts against the 2013 salary cap.

The same rule applies when a player is traded or picked up by another team off the waiver wire. The signing bonus remaining on the player's contract accelerates into his old team's salary cap in 2013. The new team takes no cap hit whatsoever. In our example, the $6 million remaining unamortized signing bonus accelerates immediately as follows: 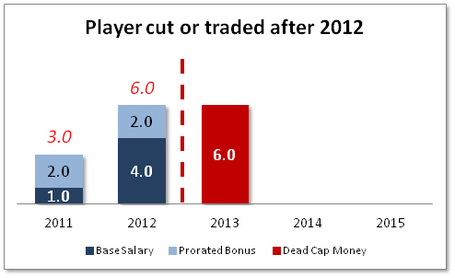 The money left on the cap from the cap hit teams take by cutting player is called dead money. In this example, the team would be left with $6 million of 'dead money' on their 2013 cap. But the team has an additional option at its disposal. 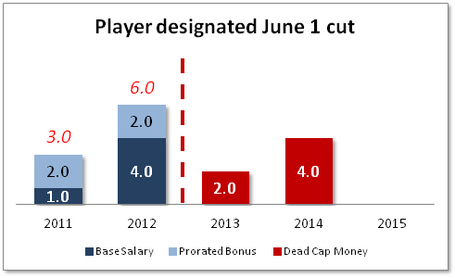 By designating the player a June 1 cut, the team lowers its 2013 cap hit to $2 million, but will have $4 million in dead money counting against its 2014 cap.

We've seen that a team has a variety of options for lowering its cap hit. In our examples, an original cap hit of $7 million was reduced to $6, $5, $4 and $2 million with a variety of different measures.

The Cowboys will want to sign Romo to a more cap-friendly contract extension that will almost certainly be heavily backloaded. They'll look to Carr, Ware, Witten and perhaps Austin for restructured contracts. They may try to renegotiate Doug Free's contract ($10.02 million cap number, $7 million base salary) and get him to take a pay cut, and they'll be looking at players like Dan Connor ($4.3 million / $3 million), Marcus Spears ($2.7 million / $2 million) and Lawrence Vickers ($1.3 million / $1.2 million) and others as potential cuts, perhaps designating one or two as June 1 cuts.