Inside Monte Kiffin's Playbook: An Introduction To The Defensive Line

We've looked at Kiffin's defensive playbook in quite a bit of detail over the past several weeks. Now, we take a look at the defensive line manual, which is significant as being a product of Monte Kiffin and Rod Marinelli working together, just as they are today in Dallas.

Share All sharing options for: Inside Monte Kiffin's Playbook: An Introduction To The Defensive Line

I took an informal vote in the comment section of my previous playbook article, asking whether we should review the Nickel or the Defensive Line next. The vote was actually tied, but after spending the past few pieces discussing coverages I decided I'd like to get back to the trenches for a bit.

The following images are captured from Monte Kiffin's 1999 Tampa Bay Buccaneers Defensive Lineman manual. Notably, this is one of the seasons in which Rod Marinelli was the defensive line coach. The playbook was contributed to me by a BTB member who has chosen to remain anonymous (thanks, again!).

First, let's take a look at some basic vocabulary. This is what is referred to when players say learning a new system is like learning to speak another language. You're basically saying the same things you've been saying before, except using different words. 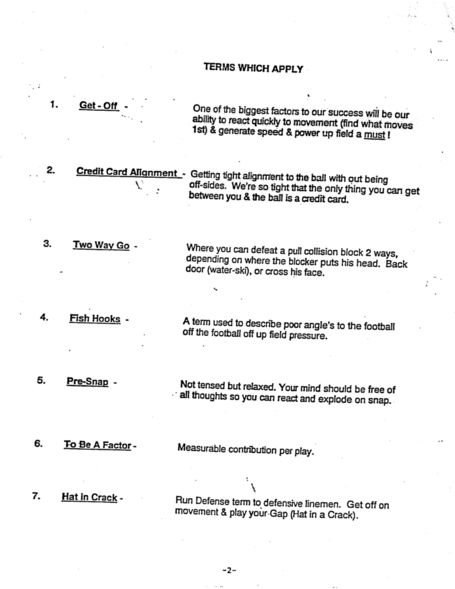 Credit Card Alignment: This is one of those things that sounds good, but isn't easily put into practice. I won't say Kiffin's the first coach to want his lineman tight to the ball, and I also don't believe he's found the perfect solution to lining up offsides. Still, at least he's trying.

Two Way Go: This is no way reflects a two-gap scheme or even front. This is a technique for beating trap blocks as well as pulling guards and tackles (and even centers, though it's far less common).

Fish Hooks: This is a visual analogy to the wasteful pattern of movement of a defender who is crashing upfield with a poor angle and has to turn and chase the ballcarrier upfield after whiffing.

Pre-Snap: This is not a definition. This is how the defender should be before the snap.

To Be A Factor: This is nice in that players are not allowed to perform the 'immeasurable' 'dirty work,' and also can't hide behind those excuses when asked why they don't show up on tape. All four lineman are charged with making a difference, and I imagine they'll be looking for that on every snap in the film room.

Hat in Crack: Helmet between offensive linemen. Again, this is solely a 1-gap philosophy; no 'eating up blockers' - pure penetration. 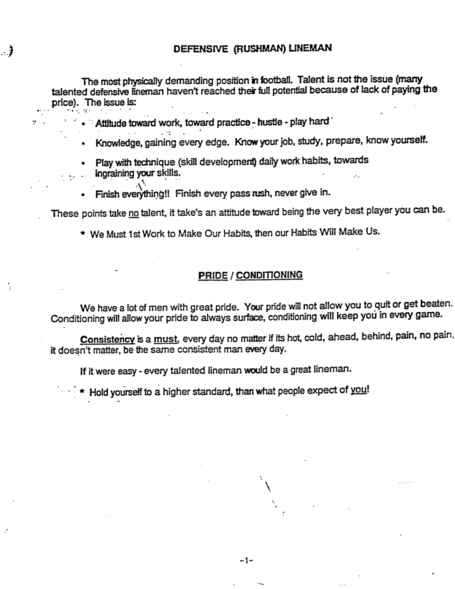 I don't feel I need to add much to this. It's obviously compatible with the RKG mantra. It adds a nifty alternate name for the position (Defensive Rushman), and also might serve as inspiration for whatever motivation you might need to inspire in yourself or others. 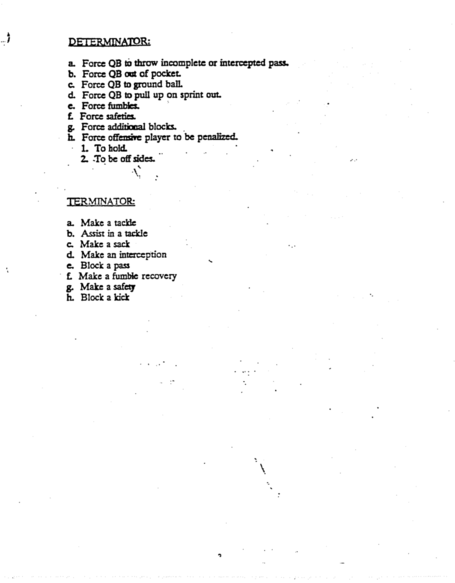 A determinator influences the outcome of a play, while a terminator ends the play. Both are desirable, but it seems that a terminator has a much stronger impact on the game.

On to run defense: 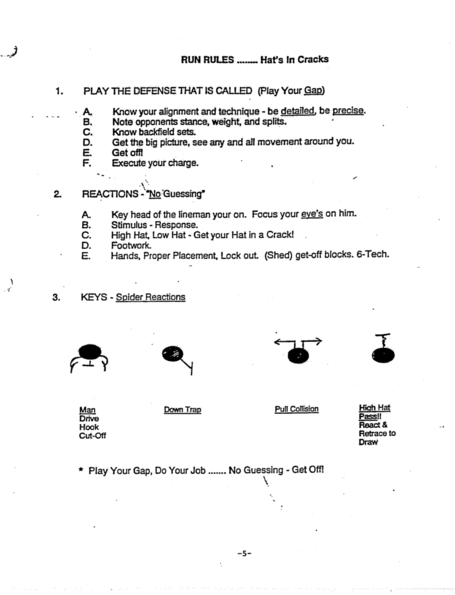 Let me explain these 'spiders':

The first two, then, are double team blocks and blocks downfield on linebackers. The third is a typical pull block.

The final is 'high hat' (offensive lineman with his head up, in a pass blocking set; if he were run blocking his head would be lower as he charged forward). This is an indication of a passing play, but, as this is run defense we're discussing, Kiffin instructs his players to maintain their rush lanes (think like special teams, kick coverage) so as to not lose to the draw.

Also, let's talk about 2E. Yes, I see that is says 6-tech. No, this still is not a 2-gap assignment. This is a conditional reaction to a diagnosed run play in your direction while you've yet to beat your man. Your first assignment is to beat your man and read once you're in the backfield, so the 6-tech is only ever used as a post-snap remedy for an early-play failure. This is still not a 2-gap scheme.

Finally, another word on explosion: 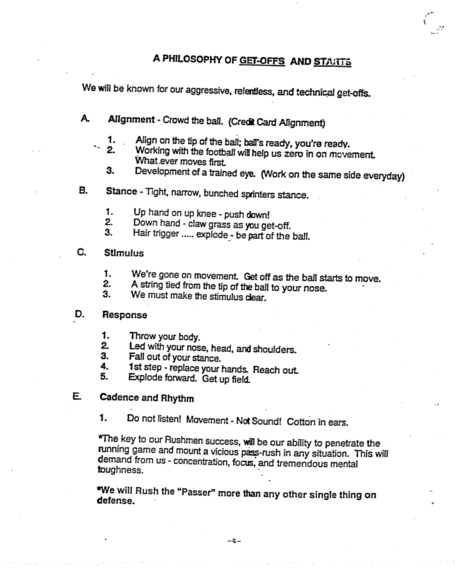 First, A3: Work on the same side everyday. This isn't a defense where multiplicity is valued, in fact it is officially one where your responsibility is to know only your job, and to know it well.

As a side effect, this will make it more difficult for backups (who really need to know multiple positions to justify roster spots as emergency backups) to crack the starting lineup, as well as challenge guys like Alex Albright, a borderline starter (albeit through sheer lack of adequate depth at linebacker) to show their worth in a single position. His fantastic versatility, playing anywhere from the 5-tech to inside linebacker, will be less valuable as a potential starter. (Side note: I have no doubts Alex is aware of this and is working hard to refine his game as a legitimate candidate for the SAM job).

On stance: note that Kiffin is describing every minor explosion that can be utilized to increase the power of that first step, even using the strength of one's wrists and fingers to push off of the grass, as well as pushing off of one's own knee in order to quickly straighten the torso.

E: First, Kiffin wants his players reacting to movement, not guessing cadence. I have speculated before that DeMarcus Ware is quite often guessing the offense's cadence, causing him to be vulnerable to jumping offsides on delayed snaps and alternate cadences. It seems Kiffin will not concede this as a viable strategy, and we may see Ware seem to lose a step as a result.

Also, in the asterisked section under E, note that 'Rushmen' is still being used in place of linemen. I've never heard the term before, and have become somewhat enamored with it.

The final asterisk, well, I think is something we can all support.

I'll ask one more time: More defensive line coverage, or shall we move to the Nickel?