There are many reasons why teams consider trading down. Perhaps the talent in a draft is particularly deep; perhaps paying two second-round rookies is cheaper than paying one first-rounder; perhaps teams are simply looking to increase their odds of hitting on a franchise player. But at the end of the day, when you trade down, you are exchanging quality for quantity. Or are you?

Share All sharing options for: 2013 NFL Draft: Moving Up By Trading Down?

There are many more reasons for trading down, but regardless of what those reasons may be, what all of them have in common is that too often you're trying to get a Mercedes on the sly and end up with a bunch of Hyundais.

Since 2000, the Patriots have had a league-high 32 second- and third-round picks. This is no coincidence. The Patriots are the classic draft pick stockpilers, a strategy that favors quantity over quality. A stockpiling strategy is about finding value low in the first round and acquiring multiple second- and third-round picks. But contrary to what many like to believe, the Patriots are not great drafters. By collecting as many picks as they reasonably can, they are playing a math game and simply trying to increase their odds of hitting on a starting-caliber player at a relatively low cost.

Yet with those 32 picks, the Patriots have only hit on two Pro Bowl players so far (Tackle Matt Light and TE Rob Gronkowski). By the same measure, other teams have done much better: The Chargers drafted six future Pro Bowlers with their 27 second- or third-round picks, and others like Philly (5/30), Chicago (5/28) and Pittsburgh (5/26) also did very well.

Of course, you can post-rationalize any trading down scenario as much as you like, but at the end of the day, when you trade down, you are exchanging quality for quantity. Or are you?

One way to look at this problem is to understand whether historically there have been draft trends that would indicate that trading down could have yielded a higher value. To do this, we'll use "Career Approximate Value" (CarAV), a metric developed by Doug Drinen at Pro-football-reference.com (PFR).

I've chosen to look at the draft classes from 1980 through 2006. This gives me 27 years worth of data, which I think is large enough to draw some fairly robust conclusions from. Why stop at 2006? Because the 2006 draft class has already achieved a total CarAV comparable to previous draft classes. The years from 2007 onwards still have some catching up to do. The graph below plots 27 years worth of the historic CarAV of each draft pick from 18 through 32 in a lot of clarity. 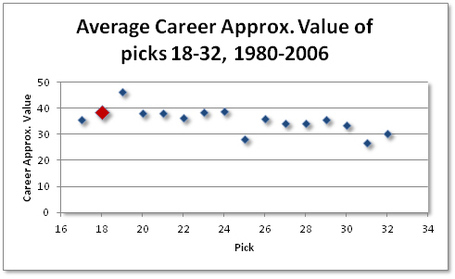 Notice that in terms of CarAV, there's not much difference between the 18th and 30th pick or so. Sure, there are some ups and downs, but essentially there's not all that much fluctuation in value in the lower half of the first round. The value drops off somewhat after the 30th pick, but remains remarkably flat after that: 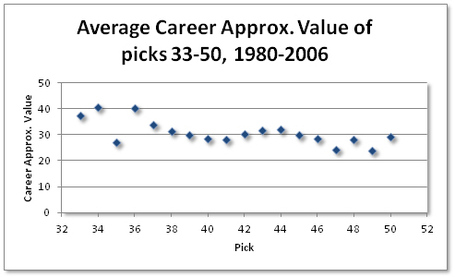 At the top of the second round, the historical data spikes briefly but then settles at around 30 CarAV until pick 50, where it starts dropping off. There obviously is a dropoff between the two charts. The lower half of the first round averages CarAVs in the high- to mid thirties, while the top half of the second round is very close to the 30 CarAV line.

Of course, this is historic data and it may or may not repeat this year. But if the players left on the Cowboys' board are all graded fairly similarly, the Cowboys may well trade down. Chances are they'll get the same value a couple of spots further down. Plus there's an extra pick or two in it as well.

Be careful though, these things work well with 20/20 hindsight, but war room reality is very different. Just ask Jerry Jones: In the 1996 draft, the Cowboys are on the clock with the 30th pick of the first round. The top rated player on the Cowboys board at that point was one of the top DE’s in that draft, Tony Brackens (50 CarAV). He's ranked at the top of the Cowboys' board, the Cowboys like him and Jones is already on the phone with Brackens when the Redskins call. They offer their 37th and 67th picks for the Cowboys’ 30th. A gain of 165 points in Dallas’ favor. Jerry Jones jumped at it.

In the end, the players chosen with the extra picks (Kavika Pittman, 35 CarAV and Clay Shiver, 11 CarAV) didn’t work out too well for the Cowboys and Jones was heavily criticized for the trade. Jones tried to defend his move by pointing to the value of the third-rounder, but his mistake was that he in essence placed value over player quality (Read a more detailed version of the story in the BTB Archives).

With the benefit of hindsight, it’s always easy to figure out what the right strategy would have been at the time. In the war room during the draft you do not have that luxury. Our own Tom Ryle couldn't resist the allure of trading down and proposed a trade-down scenario a couple of days ago. What do you think are the chances the Cowboys will trade down this year (provided of course they find a trade partner)?