How Much Is Cowboys' QB Tony Romo Worth And How Does It Compare To His Counterparts?

If you aren't allergic to advanced statistics, this might be helpful in determining Tony Romo's value. If you are, take a Claritin and read it with an open mind anyway.

Share All sharing options for: How Much Is Cowboys' QB Tony Romo Worth And How Does It Compare To His Counterparts?

Earlier this offseason, I took a look at whether or not the Cowboys could proceed without offering Tony Romo a multi-year extension. It's not that I don't want Romo to be the long-term solution behind center, far from it. My question was whether or not the best ways to improve the team includes giving him an extension. There are other ways to keep Romo aboard; the team could let this season play out and then franchise Romo for 2014 and 2015 if they felt that was the best plan.

I've often said I don't think Dallas has done enough to build around Romo and until they do, cannot walk away from him.

What I was eventually led to is that due to the salary cap implications of this, the final year of Romo's deal, they are going to have to re-sign him. Romo's cap hit for 2013 is somewhere between $16.8 and $17.228 million, depending on which resource you use. That's the ninth-highest value in the entire league, seventh among quarterbacks.

It's widely assumed that due to signing bonus prorates, Dallas could easily chop off around $8 million or so from Romo's '13 cap hit with an extension. The question I have, though, is how much is Romo worth? The easy answer is "However much they are willing to pay him," but we need more. 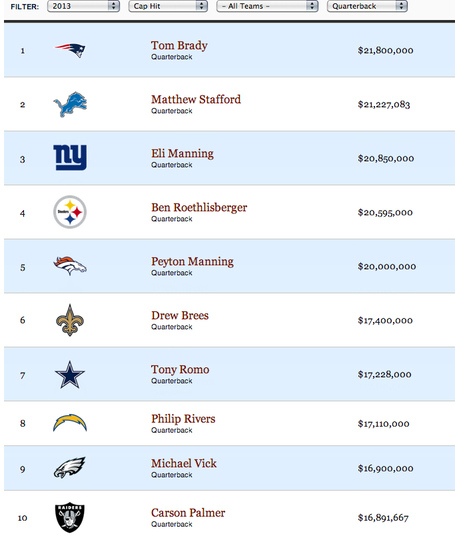 The truth is, whether we like to admit it or not, there is a bevy of quality signal-callers in the league. Aaron Rodgers, Tom Brady, Drew Brees, Peyton and Eli, Big Ben; all established vets with hardware. Joe Flacco and Matt Ryan have generally been starting for the same time as Romo and are entrenched where they are. Cam Newton, Andrew Luck, Robert Griffin, Russell Wilson, Colin Kaepernick, Andy Dalton; all young guns with perceived high ceilings. That doesn't even bring into play guys like Philip Rivers, Matt Stafford, Matt Schaub or Jay Cutler.

I'm not saying Romo isn't better than some people on that list, I clearly think he is. What I am saying is that you'd be hard pressed to convince the fan-bases of those teams to exchange their guy for Romo. You roll with the one that brought you there and each of those names is just as capable of leading a team to the promise land as Romo is (ok, maybe not Cutler).

In looking up data for another article, I came across a Brian Burke (Advanced NFL Stats) piece from December discussing how much Joe Flacco is worth. Burke, one of the advanced stat world's foremost authorities, had devised a formula that basically equates quarterback salary with two values; EPA and WPA.

If you're interested in advanced stats and haven't read this research, I suggest you start, here.

Basically, for every situation on the field (down, distance, field position) there is an expectation of points to be gained (EP). You'll just need to trust me that Burke has done the math for every situation in a game to devise his formula. A play starts with a given EP. If you were to gain 7 yards and a first down, you now have created a new EP. Therefore, that particular result has a value, which is referred to as the Expected Points Added (EPA). If a play makes the chance of scoring decrease (sack, run for no or little gain that includes loss of down, incompletion, turnover, etc.), the play has a negative EPA.

OK. You should definitely read up on EPA to see how they answer questions such as but what about in a blowout, or icing the game and all those sorts of things. Now we need to look at WPA, or Win Probability Added. Self-explanatory title here, how much does a given play go towards a game actually being won. Last year when I was doing the news round-up articles, I would often include the graphical representation of this stat for the previous Cowboys game. It would show how likely, after each play, the Cowboys were to win that game.

The model created here at Advanced NFL Stats uses score, time, down, distance, and field position to estimate how likely each team will go on to win the game. For example, at the start of the 2nd quarter, a team down by 7 points with a 2nd down and 5 from their own 25 will win about 36% of the time--in other words a 0.36 WP.

WPA is very sensitive to the context of the game. That same interception that cost -0.08 when a team was down by 7 points in the 2nd quarter would cost much more if it the offense was leading by a point late in the 4th quarter. Putting your opponent in immediate field goal range would be nearly fatal.

For more on WPA, go here.

Are you starting to get a picture for why advanced stats give us so much more insight into the reality of the situation as opposed to looking at blanket stats such as, "oh he threw 19 interceptions on the year"?

KD, I thought we were here to talk about Romo's next contract?

Right you are. OK, so as I was saying, Burke developed a formula that looks at quarterback's salary as a function of their EPA and WPA. His formula looks at how much "bang for the buck" has been received based on salary earned.

The "inflation" of the salary cap means that 2000 dollars should be multiplied by 1.98 to get current cap figures, since the cap has nearly doubled since then.

OK, so what were Romo's metrics?

Excluding his first year as a starter, we'll look at Tony's career EPA and WPA averaged over a season to give a basic representation. His EPA averages out to be 89.15; WPA 2.49.

For comparison purposes, Tom Brady's are 132.7 (EPA) and 3.44 (WPA) while Eli Mannings are 71.5(EPA) and 2.2(WPA). Clearly, EPA and WPA are like any other individual stat in a team sport; a good tool but not a direct correlation to team success and affected by the performance of teammates.

Using Burke's formula and adjusting it from Year 2000 salary cap to Year 2013 cap, Romo's value in millions is approximately $11.6 million for 2013. If a team is looking at the return on investment compared to other NFL teams, that is what Romo's take home should look like based on his prior performance. When comparing to the values that are actually paid out to the top, veteran, NFL signal-callers, Romo's new contract should have an average salary of approximately $14.5 million.

Now, the funny money of NFL signing bonuses obviously comes into play here. Burke also admits that the performance of quarterbacks has increased about 10% since 2000 and that probably needs to enter the equation, but it is nowhere near the uptick in salary. Regardless, his findings are interesting; saying that QBs like Favre and McNabb have been overpaid while Brady, Brees and Manning are outperforming their salary cap hit.

Of course, the tough job will be determining where Romo will be at the end of this next extension. There are a lot of other factors that go into a player's salary, including the market value. Below I take a look at the top QBs in the league and where they should be paid based on EPA and WPA. To make things fair, I eliminated the first year as a starter from everyone's values unless they received extensive playing time prior.

You can clearly see that Eli Manning is the worst quarterback to ever win two championships. You can also clearly see that Michael Vick might be the most overrated person in the history of overrating things.

Outside of that fun, there is still plenty of great info here. For one, there's evidence to the claim several people (including myself) that Aaron Rodgers will go down as the best quarterback ever. His numbers are jaw-dropping. Also to be noted, the destruction of the fallacy that Carson Palmer was a top tier QB at any point of his career. Oakland trading a 1st and 2nd for him might be comparable to a 1st and 3rd for Roy Williams, but I digress.

You can see for yourself that aggregate points don't always correspond to a lot of winning. Phillip Rivers has an elite EPA, but he doesn't make plays that affect winning at anywhere near a rate as the rest of the list.

It's stated that the Cowboys have salary cap and metric wizards out the ying yang, so it's likely they have access to the information presented in this article. So what do you think? Is Romo worth $14.5 a year? More? Less?