How will the Cowboys generate pressure on 3rd-and-long while keeping seven in coverage late in the 4th quarter of the Super Bowl? Have a look inside Monte Kiffin and Rod Marinelli's defensive line playbook and find out.

After the last article, I once again asked for a vote on what topic to cover next. Once again, the result was split evenly between Nickel and D Line coverage.

I offer a happy medium: Defensive Line games in Nickel and Dime coverages. We'll take a look at all of the fancy tricks Kiffin will be pulling out when the opponent is in a passing situation. Again, these are just 4-man pressures we're looking at, and we're expecting to generate substantial pressure with that front four. 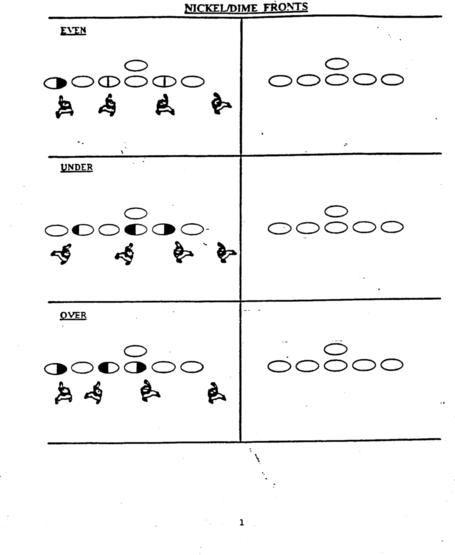 What's this?! An Even front!? From the looks of the games we'll be covering next, the even front is merely being used as an ambiguous look to put some extra surprise factor into our stunts; this is still not a reason to pursue a 340-pounder with a first round pick.

Actually, an aside on this fascination with size. Every player on the defense needs to be big enough to contribute on the play. Every player on defense must be fast enough to make it to the play. Generally you want the biggest (and by that, I mean strongest) player possible who can get to all of the plays that he needs to get to. 340+ linemen generally don't meet that speed prerequisite; if, for example, they can't make it to the screen, they can't contribute on the screen play and the opponent will have a single-man advantage running screens when this player is on the field. Give me the biggest guy you can find who can make plays against the screen, the toss, and the counter - but don't expect him to be much bigger than 310. The slow behemoths may look good in the weight room (or the scouting combine), but, like a slugger who can hit home runs off every fastball, but only hits fastballs, the opposing team won't throw him what he wants to hit.

Anyway, onto the games: 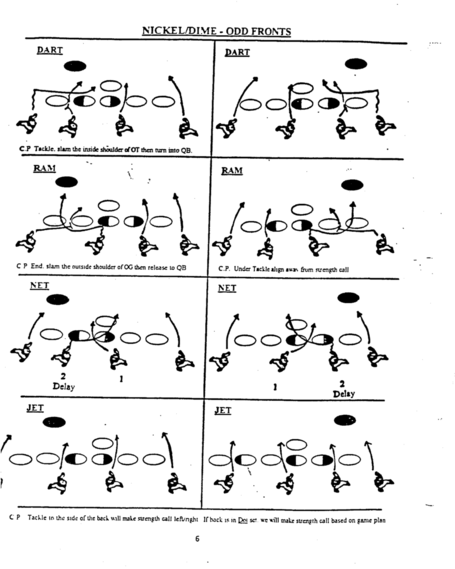 I like how Kiffin draws his linemen, here. I've seen the little ^ notations used, rotated, to indicate stance on occasion, but I really like the full body representation. Nothing abstract about it.

I'm also liking the violence of attacking offensive linemen's shoulders in order to disrupt their ability to pick up their blocking assignments. It's like chipping a tight end before he gets out on a pattern, but we're chipping a guard to allow our tackle to penetrate behind the end. We have players angling towards gaps, but then attacking the linemen outside of them, which involves some trickery. 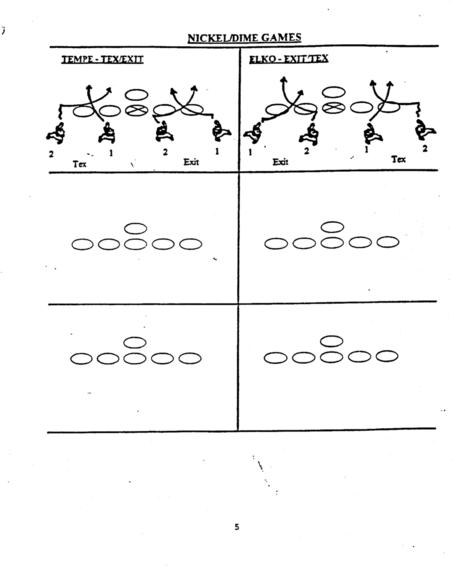 I presume that the empty formations are for players to write in plays either as learning tools or as the gameplan calls for new installations. Nevertheless, this is exactly how this page appears in the playbook.

The only thing to point out here is that, again, Kiffin is creating a modular scheme. The Tex and Exit games can now be thrown into any other situation and be instantly understood players with fluency in the scheme language. As a parallel, think of any foreign language you might have studied in the past. If you learned the word for 'bird,' and the word for 'house,' would it not be easier to learn 'birdhouse' if it was simply a combination of the two words you already knew (rather than its own unique, unrelated word)? The correct answer is yes, and Kiffin is using this to his advantage by creating a similar situation by applying the same stunt terminologies to multiple situations throughout his scheme. 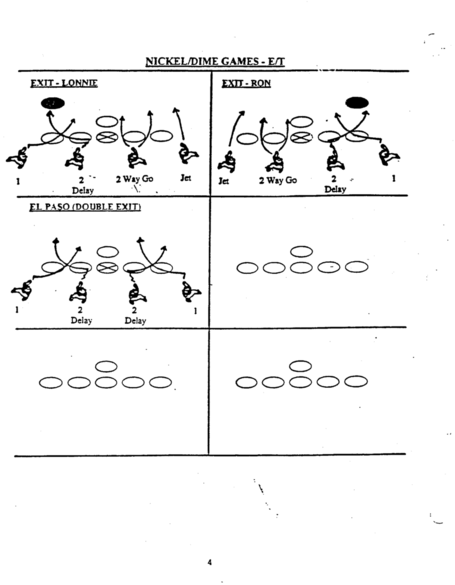 And, wouldn't you know it, here's 'Exit' being reapplied to three more plays. As for Lonnie and Ron, it's a common practice to use pairs of 'l' and 'r' words to designate 'left' and 'right' variants of schemes, based on strength. Offenses use a similar practice, but often with 'x,' y' and 'z' words to indicate motion by the x, y and z receivers (no, the words aren't as creative. It's more like 'x fly' to correspond with 'zoom' and 'y motion'). 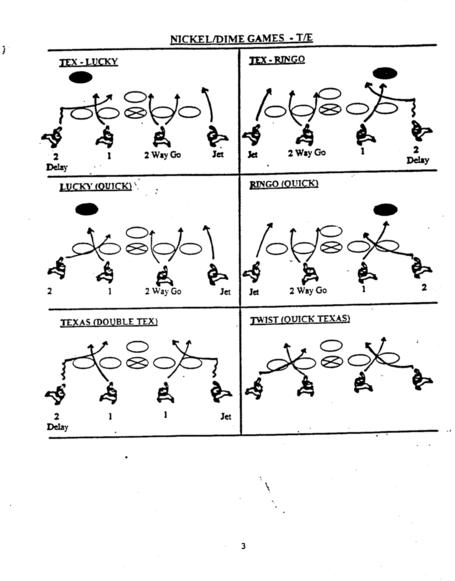 And now we've got a full page of 'Tex' plays. It would seem the empty space after the 'Exit' plays was simply meant to group the plays together by family. Note the even spacing being utilized by two-way go assignments. A two-way go is a player option to attack either gap as a pass rusher. It is not two-gapping, which is not a choice between two assignments but rather a responsibility for two assignments (two-way go players still only attack one gap). 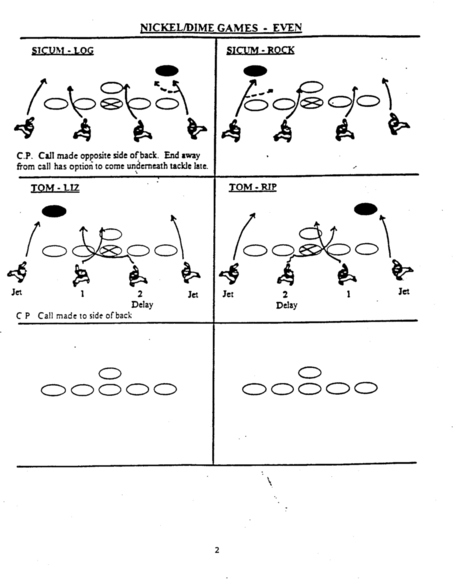 Looking at the 'Tom' plays, I really hope our 2013 opponents have interior offensive line continuity issues. It would be real nice to see an inside stunt work in our favor.

This concludes our look at the defensive line games in the Kiffin/Marinelli system. I encourage everyone reading this to go ahead and comment! I welcome the opportunity to discuss these schemes with everyone. I don't have any background in 4-3 schemes, having exclusively looked at the Dallas Cowboys of the past few years as my topic of interest, so I would really like to hear from everyone who's actually seen Dallas in a 4-3.

Once more, I offer a vote: what shall I cover next? The next section of the Defensive Line manual (which is where this material came from) looks at blitzes from the base defense. The Nickel still stands as the next portion of the actual playbook.