On The Chalkboard: Attacking Cover 2 (Pt 1)

Let's get back to the chalkboard and look at 2 route combinations teams will use to attack the Cowboys Cover 2.

Share All sharing options for: On The Chalkboard: Attacking Cover 2 (Pt 1)

As we take our second trip to the chalk board, be sure to check out the first installment, on the principles and technique of Cover 2 in the Cowboys new defense.

Now that we have an understanding of how the Cowboys will play their base Cover 2 look, we can look at how their opponents will try to attack the coverage and move the ball down the field. Today we'll focus on 2 of the most widely used "Cover 2 beaters" in the NFL. You will see these route combinations run in every game every Sunday.

Now let's go the chalkboard and look at the X's and O's. 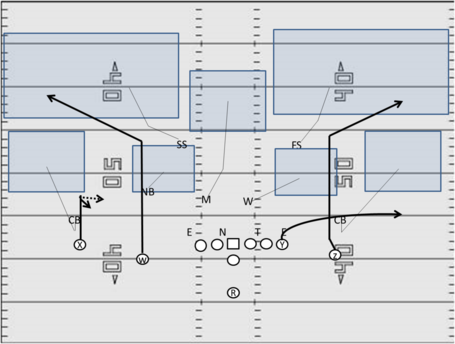 Here I have the offense in 11 (1 Back 1 TE 3 WR) personnel, & the defense is in Nickel (5 DB) personnel. As we look at this it's important to note that these route combinations wouldn't necessarily be run together on the same play, rather these are each half-field concepts that can either be mirrored (same concept on both sides) or run with another route combination on the back side.

As we look to the closed (strong) side of the offense's formation, we see a concept known as a flat-7 combination. This combination features a flat-route by the #2 (inside) receiver to that side, in this case the TE (Y), and a 7 (corner) route by the #1 (outside) receiver.

An important thing to notice on this combination, check out the alignment of the #1 (Z). His reduced split to the top of the numbers leaves room for his break to the corner, and is a pre-snap key for the defense to look for the flat-7.

Why is it effective?

This route combination puts a vertical stretch on the zone defense. Look at the Corner route by the Z receiver. His route runs over the top of the CB's zone, while the flat route by the Y runs underneath the CB. This is the stretch I'm referring to. The CB is forced to make a decision on who he is going to take away. If he sinks back underneath the 7 route, the QB can make the throw to the flat, and if the CB drives forward on the flat route the QB can make a throw to a WR running an outside breaking route with outside leverage against a safety coming from just off the hash mark. For an NFL QB this should be an easy completion and a first down.

This time the Corner route comes from the #2 (inside) receiver and the smash comes from the outside receiver. Notice that even though the #2 on this side is aligned off the line of scrimmage, his corner route breaks at approximately the same depth as the Corner from the #1 to the closed side. This speaks to the fact that outside of the quick game (slant, quick out, hitch etc) virtually every route breaks within the 12-15 yard range.

The "smash" route is a route that different coaches run different ways. For example, some coaches teach it as a simple hitch route (5 yds and show the QB your numbers) while some teach it as a short in route. Mike Leach & the rest of his coaching tree teach their WR's to run the smash route exactly the same way they run their "tunnel" screen in order to try to draw the CB forward and clear room for the 7 route.

Why is it effective?

This combination works very similarly to the flat-7 in putting a vertical stretch on the CB's zone and creating an out breaking throw with outside leverage against the safety over the top.

How do you stop them?

The key for the defense to stop these combinations is the play of the CB. He has to sink to his depth at 12 yards and prevent the throw to the 7 route, and force the underneath throw. Once the ball comes out underneath, it's time for the CB, the LB/NB and the Safety to that side to rally and make a gang tackle, stopping the play for a short gain.

If the QB tries to force the throw to the corner, the CB can play under the route, make a play on the ball, and hopefully turn it into points for the defense.

When the games get started up for the 2013 season, be sure to watch out for these combinations and check out how important the technique of the CB is in stopping these types of combinations.