The offseason is the time to, hopefully, improve your team. While most pay attention to the draft and free agency as the means of improvement, the truth is that the most important improvement is the improvement in players, effected by the coaching staff.

Share All sharing options for: Inside Monte Kiffin's Playbook: Summer Drills For Rushmen

In the spirit of team improvement, let's take a look at how the Rushmen will be improving this summer.

If you've missed some entries in this series, 'Rushmen' is the official term for defensive linemen in Kiffin's playbook. 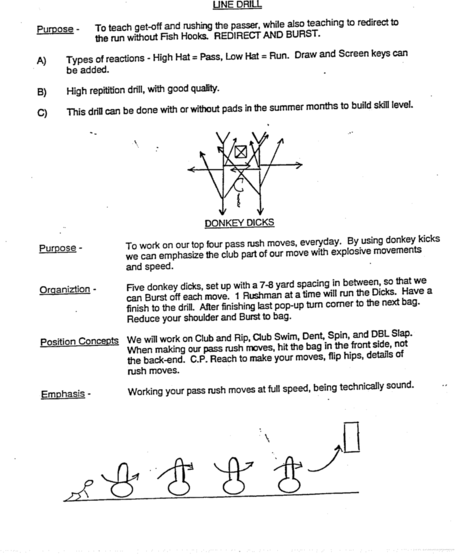 There are some things in these pages that seem to guarantee this playbook's authenticity...

The first drill, the Line Drill, looks much like a receiver's route tree. The two 'V's at the top are the linemen's starting positions, while the lines emerging from their tips are their possible paths of movement.

The idea is that Kiffin and Marinelli want their Rushmen to move efficiently; they want sharp cuts on every reaction without wasted movement. If you've watched, for example, Tony Romo eluding pressure, you've seen that often D Line players take very rounded paths when they have to change direction. Not here. The players will be asked to rush immediately forward and, once at full speed, react immediately to various stimuli causing change in direction.

Where the Line Drill is an instinct drill, the second drill, Donkey *****, is a technique drill.

Players will be rushing through these distinctly-shaped bags (most of us who've played football would recognize them) which are designed to be hit without easily being knocked over. The Rushmen will be using their top four rushing moves on these bags in succession. Once through, the diagram indicates that the Rushmen will leave the ground attacking the giant mat in the sky (gotta love coach physics - this is a top-down diagram of things drawn from the side-view)...actually, they'll be hitting a 'quarterback' or diving onto a mat. 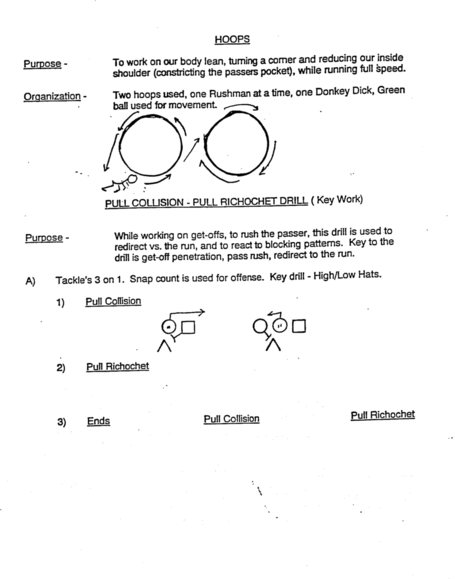 The Hoop Drill is a figure-eight pattern run by Rushmen in order to minimize their turning radii. These are not lumbering forces in the middle waiting for ballcarriers to come to them; these are athletes, and scary ones at that. Just imagine Tyrone Crawford running each of these drills, every day, and you'll be more convinced than you would by imagining, say, Marcus Spears doing the same.

The Pull Collision and Pull Ricochet drill is used to train Rushmen to react to the offensive linemen's body positioning in order to predict the nature of the offensive play. The intelligence of this position is meant to be shown in the offseason, primarily, and converted day-by-day into nonthinking execution. 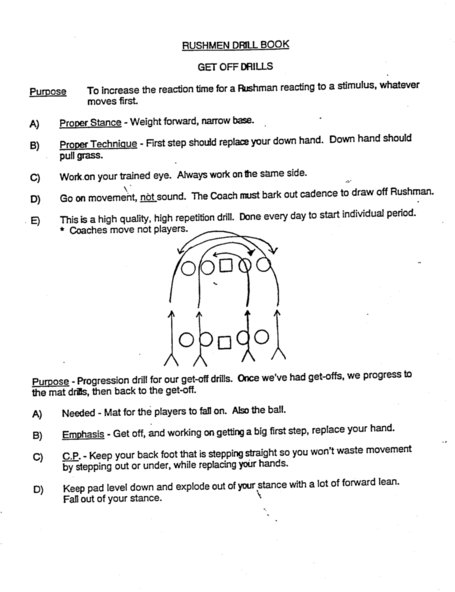 (Yes, this is the first page of this section. The playbook is not preserved in perfect page-order, with some stray pages residing in odd places in the PDF.)

You may be noticing a pattern here: we're training instinctive reactions. These Rushmen will not be jumping offsides (we hope), but will be attacking the first thing that moves. I can't imagine them being the guys who sit back and point when an offensive lineman jumps offsides. No, they'll be reacting and in the quarterback's lap by the time the whistle's blown. Luckily, this type of reaction is legal.

The bottom of the page is the Matt Drill, though it lacks a title. This is a simple explosion from the stance, laying out horizontally after said explosion. The players are literally exploding and then falling down. Theoretically, this over-explosion will help the players to manage a greater controlled explosion in other situations. This is the same theory as distance runners training with sprints (speaking from personal experience) - training maximum exertion raises the threshold for controlled exertion. 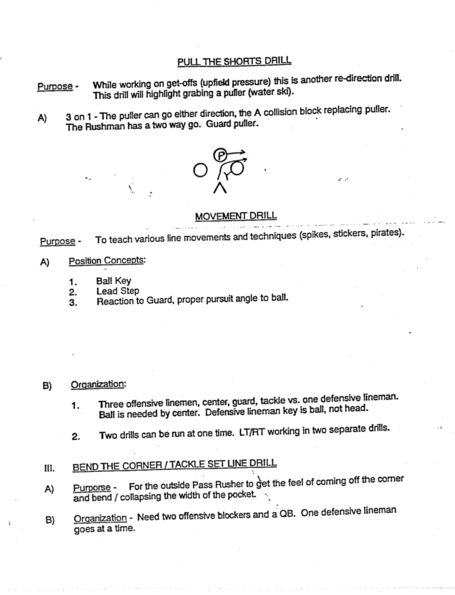 I can't claim any familiarity with the Pull the Shorts drill. Apparently, the Rushmen will follow the puller to the play. This is a very common concept. The 'water ski' concept, however, leads me to believe that the Rushmen will literally be grabbing hold of the puller's waste to disrupt his lead block. Water skiing in reality is sitting back while holding tight to a handle that pulls you along the water's surface. I'm uncertain of the legality of this type of play, although the rules are fairly flexible inside the tackle box.

The Movement Drill is another instinct-builder. The Rushmen will react to movement (the Center's snap, and then the whole line unit's movement together) in order to establish the correct path into the backfield. Again, the first explosion is happening before any analysis of the line's movement is made - adjustments are made while pursuing the quarterback at full speed. NO THINKING.

The Bend the Corner / Tackle Set Line drill continues at the top of the next page: 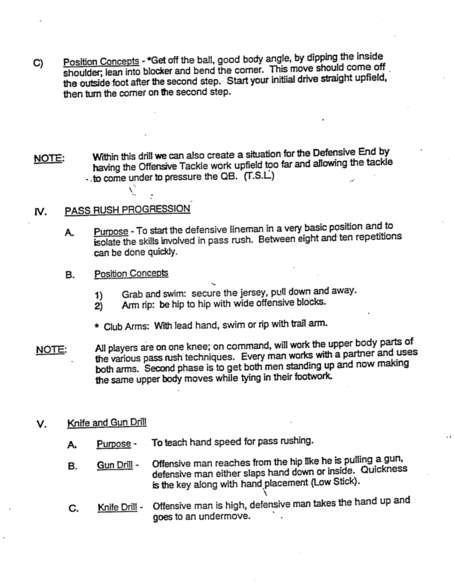 This is something we've seen DeMarcus Ware excel at - creating a low angle between his body and the ground to create leverage on the edge. It's essentially an edge rushing drill.

The Pass Rush Progression drill is a fundamentals-focused drill that will teach hand positioning and footwork during pass rushes.

The Knife and Gun drill continues on the next page: 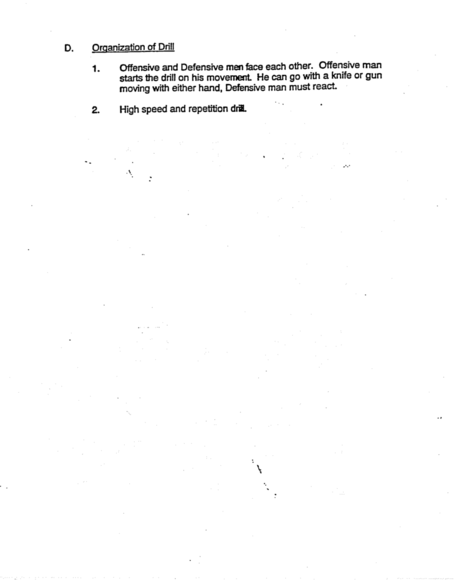 This is another hand positioning drill, but this time it is reactionary. Reactionary hand drills help the Rushmen to counter blockers that he encounters, after his initial attack, on the way to the quarterback.

These are the techniques Rod Marinelli and Monte Kiffin will be using to instill instincts, discipline, explosion and tenacity into the Cowboys' defensive line this summer. If the Cowboys draft a defensive lineman in the coming draft, I don't care who it is. Just put him through these drills a few thousand times each and I'm sure he'll play admirably along the line.

You can select previous articles from the "Inside Monte Kiffin's Playbook" Series from the dropdown menu below. Simply click on the article you want to read and the article will (or should) open in a new tab.