Cowboys 4-3 Defense: Where's The Will Linebacker?

Share All sharing options for: Cowboys 4-3 Defense: Where's The Will Linebacker?

In general when we hear the term Will Linebacker in terms of the 4-3 defense, we think of the linebacker who lines up to the offense's weak, or Open side. However, if we look into Defensive Coordinator Monte Kiffin's Playbook, or spend some time (as I have been lately) watching film on Defensive Line Coach Rod Marinelli's defensive group from Chicago, you quickly discover a nuance that prior to the Cowboys' decision to switch to the 4-3 I hadn't been aware of.

To illustrate this we are going to take a look at two screen shots from the end zone view of the Week 4 Cowboys and Bears match up. First we'll look at the Under front and talk about how to distinguish it from the Over. 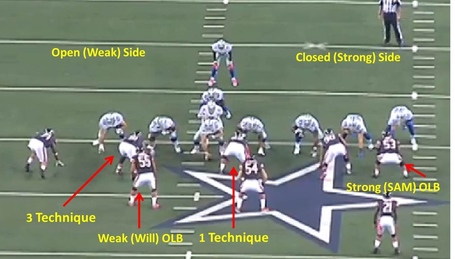 Here we see that the Cowboys have put 22 (2 RB 2 TE 1 WR) on the field with the backs aligned in an I set with both TEs to the Closed side, and the Bears have countered with their Base Personnel in the under front.

When Monte Kiffin calls the under front, that communicates to Jay Ratliff, Sean Lissemore, or whoever else is playing the 1 technique Nose Tackle that he will play the inside shoulder of the guard on the Closed (Strong) side of the offensive formation. This in turn tells the "Under Tackle" that he will play the Outside Shoulder (3 tech) of the guard on the Open (Weak) side of the formation.

As we go to the Over front, you'll see that this rule holds true no matter the front. 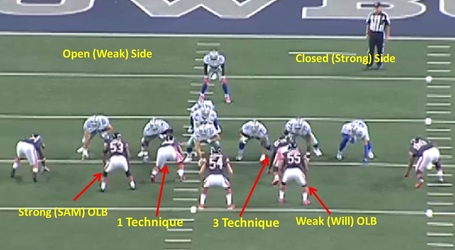 Here the Cowboys have 21 (2 RB, 1 TE, 2 WR) personnel and have aligned in a basic I formation. The Bears have countered again with Base 4-3 personnel, aligned in the Over-Stem front.

When the over call is made in the huddle, it tells the 1-Technique Nose Tackle that he will align on the inside shoulder of the Guard to the Open side of the formation, and the 3 technique will align on the outside shoulder of the closed side offensive guard, and the Will LB, actually lines up on the strong side stacked behind the 3 technique. This shows that the Will LB follows the 3 tech to either side based on the front call. This rule has held true in base personnel in the film I've seen, although it does break down in the Nickel package.

So as the Cowboys line up in their new 4-3 defense in the 2013 season, we should expect to see Bruce Carter follow Jason Hatcher or another 3 technique player, aligning on both the open and closed side of the formation, and making a ton of plays.