On The Chalkboard: Attacking Cover 2 pt 2

How can a team use play-action to attack the Cover 2 scheme? Let's go to the chalkboard and find out.

Share All sharing options for: On The Chalkboard: Attacking Cover 2 pt 2

In our first trip to the chalkboard, we looked at the Cover 2 scheme that will be the Cowboys base coverage under new defensive coordinator Monte Kiffin, and in our second trip we looked at two basic route combinations that we can expect to see teams use to try to attack that coverage. Today we will continue to improve our understanding of the Cover 2, by looking at a two-man play-action route combination that offensive coordinators will use to look to attack the safety in his deep half assignment.

Let's go to the board and take a look. 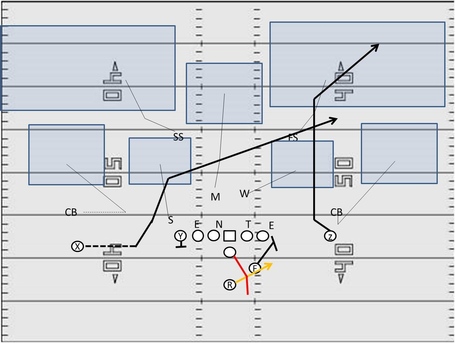 Here our offense is in Pro or 21 (2 Backs 1 TE 2 WR) lined up in a Far Left formation (TE goes left, FB is off set opposite, or "far" from the TE). The defense counters with Base Personnel in an under front (notice the Will LB Follows the 3 tech). The defenses call here would be "Under 2" and hypothetically we'll say it's 2nd down and 4.

Now lets look at the offensive scheme and why it is effective vs Cover 2.

This combination is known to some NFL teams as the "Yankee" concept. It features a deeper than normal 7 (Corner) route, paired with a deep crossing route by the backside receiver.

In most cases all routes (outside of the quick game) break at a depth of 12-15 yards, in this case however the route breaks deeper, maybe even as deep as 18-20 yards, the reason for this additional depth is to force the safety, in this case the FS to gain extra depth to stay over the top of that route as he is threatened deep.

The route that really makes this combination work is one of my favorite routes because of the problems it presents for any coverage - that route is the deep crosser. I have this route being run by the X receiver, who comes in a short "divide" motion pre-snap in order to shorten his split and enable him to get across the formation and in position to make the catch.

The WR is taught to run under the SAM LB and over the top of the Mike, and then work across the field. His target, should he run all the way across the field would be to run out of bounds at a depth of 20-22 yards. He becomes a target between the numbers and the sideline.

A very important thing to remember about scheme in the NFL is that most of the time the schemes, route combinations and run concepts are rarely original or new. Most of the time it is a base scheme, or some variation of that scheme, with some sort of window dressing in attempt to prevent it from being diagnosed, or to help put offensive players in position to succeed or to take defensive players out of position to prevent a completion.

Here we have 3 examples of that window dressing. First is the motion by the X, this "divide" motion is common in run schemes as it brings the WR in position to crack block on a LB on a run to the outside, and also sets up the WR to have room to break either inside or outside, so it creates a lot of problems in the secondary.

The second piece of window dressing I'm showing here, is the shortened "nasty" split by the Z. This has a similar impact as the motion on the other side of the field, it creates opportunities to break in either direction as well as be in position to help out in the blocking scheme of a run to the edge.

Finally the piece that is truly key to this concept is the Outside Zone run action in the back field. The Wide Zone, Stretch, or Boss play as it is sometimes called is one of the most popular run schemes in today's NFL, and thus, has also become a popular run action for play action passes. Threatening the edge with play action is particularly important because if the defense is in fact playing Cover 2, the CB has force responsibility vs the run. If that CB loses eye-discipline and peaks in the backfield, he takes himself out of the play and gives your team the opportunity to isolate the FS against 2 WR's in the intermediate range with the opportunity to catch and run.

This isn't a play action "shot" play necessarily, but it is a play that will gain yards in chunks, and if your WR has some run after the catch ability, he can make the FS miss, and turn it into a big play.

For an example of this concept on the field, take a look at this highlight of Dwayne Harris' 38 yd TD catch in the Cowboys pre-season game vs St Louis in 2012.