On The Chalkboard: What Will The Tampa Two Look Like In Dallas

With all the changes on defense this off-season, we know the Cowboy's will play a Tampa-2 base coverage. Let's go to the chalk board to break down what that base coverage will look like, and each player's responsibilities.

Share All sharing options for: On The Chalkboard: What Will The Tampa Two Look Like In Dallas

First of all, I want to thank everyone here at BTB for the warm welcome I've received since being officially announced on the front page. The team of writers have been amazing, and who would have thought a few weeks ago, some article about a guy like me would have more than 3X the amount of comments as one about the Dallas Cowboys play caller! It's been very humbling, and I'm excited about getting started.

I wanted our first trip to the chalkboard to take a look at the base coverage we'll see every Sunday from the silver and blue, and as we build our repertoire hopefully we'll have a pretty good understanding, not only of the coverages we will see, but also how teams will try to attack those coverages.

So of course we will lead it off with what fans and media call the "Tampa 2." The reason I say this, is when you hear people who played in this system talk about this coverage, it's simply "Cover 2." When Monte Kiffin was hired as the Cowboys new Defensive Coordinator, our own Rabblerousr wrote a very good piece in which he lead off with the history of the scheme, which you can read here.

Also, Coty has been doing an awesome job of peeking inside Kiffin's 90's Tampa play book to give insights into the schemes, so you should be sure to check out his work on this as well.

Now that we've got the formalities out of the way, lets go to the chalkboard to look at the scheme. 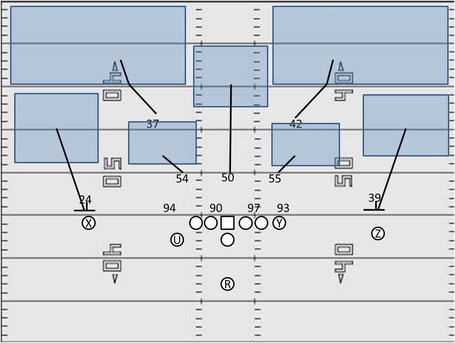 Here I have the Cowboys base defensive personnel aligned in the "Over" Front, vs an offense with 12 Personnel (1 Back, 2 TE, 2 WR), aligned in what Alex Gibbs calls the "Perfect Formation." Basically it's a balanced "Ace" set with the second TE (U) flexed off the line of scrimmage.

As you can see, this coverage essentially becomes a 3 deep- 4 under zone coverage, with 4-man pressure. The theory is simple, get quick pressure with your front, drop into your zones, force a throw underneath and rally to make the tackle and get off the field.

The first place I want us to look at is the Safety position. As we know, on Monday morning the Cowboys released four-year starter Gerald Sensabaugh. So I have assumed the starting safeties to be Matt Johnson & Barry Church. As you can see, the safeties line up at a depth of about 12 yards. At the snap of the ball their first read is the Number 1 (outside) receiver to their side. This read gives them their run/pass key. As you see in the diagram, their first move is to gain width, and get to the top of the numbers on the field at a depth of 15-18 yards. This allows them to protect for the 9 (fade/go) route, and still react to inside vertical routes. The safeties absolutely must gain enough depth to stay "on top" of any deep routes. If anyone gets behind them it is time for the band to play the fight song and add 6 points to the scoreboard.

As we move down from the Safeties let's look to the two biggest investments of the 2012 off-season, the CB's. Many people, including myself, had questions about moving to this scheme after the moves to acquire the man CB's but the more I think about it, the more I like the flexibility having guys that can play man will give this defensive staff.

The technique for the CB's is very important, they must line up with outside leverage, and get their hands on the WR at the line of scrimmage, forcing an inside release. This gives the safeties time to get wide before they can be threatened down the sideline. This can also disrupt the timing of a route combination and force the QB to move to his next read, and check the ball down.

Once they jam the WR they take a 45 degree zone drop (butt to the sidelines) to a depth of 12 yards. It is imperative that these guys get to their landmark depth, as this protects the safety 7 (corner) and 3 (comeback) routes that can give them trouble in Cover 2.

As we move inside to the linebackers we see what I believe is the most important position in this scheme and that is the Mike LB. In Dallas, this will likely be Sean Lee, and I can not think of a player I would rather have at that position. He is exactly the kind of play making LB you want in the middle of your Cover 2 scheme.

The technique for the Mike's drop is to read his run/pass key (hi hat/low hat) and open his hips to the passing strength of the formation and run with any immediate inside vertical threat. He essentially becomes matched up man to man with a TE or slot WR who is running a seam or post route. If there's not an immediate threat he drops to 15 yards in the middle of the field, and rallies to the ball on a throw underneath.

The outside LB's have mirrored assignments, read run/pass, then drop to the "hook" zone. These guys, particularly the Will (Bruce Carter) will have lots of opportunities to make plays on crossing routes thrown underneath. By definition, as the weak side 'backer, he is aligned opposite of the opponents primary tight end. So when that TE crosses the field he will be running into Carter's zone. Guys like Derrick Brooks and Lance Briggs have made Pro-Bowl level careers out of intercepting crossing routes from this WLB spot.

Here I am assuming the Cowboys want to get their best four guys on the field. So I've got Hatcher at the 3-technique "Under Tackle," and Jay Ratliff at the 1-tech nose tackle. I also think Tyrone Crawford will have a big role in this D-Line as well as Sean Lissemore.

The defensive line is charged with getting pressure as quickly as possible. Any number of games or stunts can be run to help generate this pressure but if DeMarcus Ware and his guys up front can't get to the QB, it will be a long night for the guys on the back end. This is exactly why I think the Rod Marinelli hire was perhaps the best move of the off-season, followed closely by tagging Anthony Spencer.

When to call it:

I'm sure that by the time the regular season opener rolls around Monte Kiffin will feel as though he can call Cover 2 in any down and distance situation, anywhere on the field. However, look for it particularly on 3rd and 7+ as well as in the red zone. These are times when you don't want to give up the big play and you want to be able to make a tackle on an underneath player and get the ball back to Tony Romo or force a FG attempt.

As is true with any coverage, this scheme isn't perfect, and it does have weaknesses. However, if you can get speed on the field, force throws underneath, & rally to the ball you can get off the field in big situations and win a lot of football games.

In the near future, we will take a look at a few route combinations that can attack this coverage, as well as looking at other coverages that will be in Kiffin's bag of tricks come early September.