Inside Monte Kiffin's Playbook: The Nickel

We all know that teams only spend about 30% of all snaps in their base defenses. The next most used formation is the Nickel, and we're going to take a look at it, now.

Share All sharing options for: Inside Monte Kiffin's Playbook: The Nickel

Though it's been delayed by defensive rush coverage, the Nickel is finally here. This is the formation in which Orlando Scandrick will show his worth (unless through some unforeseen/unlikely circumstances Jenkins stays and Scandrick moves to Safety). Anyway, Scandrick has been very good at his job as the nickel corner these past few years.

The last two years, we employed a somewhat complex set of personnel groups in Nickel situations (and every situation, really). This is not the case under Kiffin. We have one set of personnel for base, and moving to nickel is a single-man substitution - the sam is replaced by the nickel corner. I have a hard time imagining 9 men on the field resulting from such a simple substitution system.

We're going through these formations in the order they appear within the playbook. 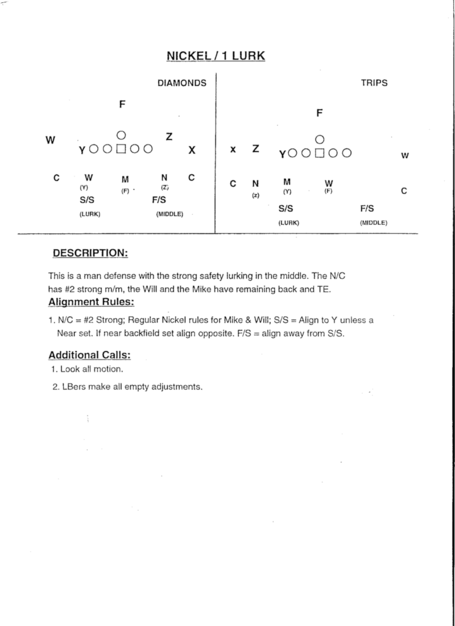 In this formation, we have a single high safety, the free safety, playing centerfield. The strong safety plays the underneath 'Lurk' zone, similar to where the MLB would play in a normal Cover 2 defense. The corners and 'backers are in man coverage as designated by the letters beneath their positions in the diagrams.

This is the job that Sensabaugh must not have been sufficient for. Despite his straight-line speed, he didn't have the instincts, ball skills, and agility to cover the entire width of the field. While Sensabaugh was capable of shutting down the deep portion of one half of the field (see Calvin Johnson with and without Sensabaugh over the top), he was not capable in man coverage, and was not effective when asked to cover too much ground.

Single-high safety looks are very common in Kiffin's defense, so Sensabaugh was not an ideal candidate. I'm not certain, but I don't believe Matt Johnson is any more athletic than Sensabaugh was - but perhaps either his price tag or his college tape has convinced the new regime to keep him around.

One more note on the formation: the 'strength' is to the side with the most receiving threats. The nickel corner is assigned to take the #2 receiver on the strong side, so in situations where there is a tight end or third receiver wide to the opposite side, Scandrick may be lining up on #1 or #2 receivers if the other team schemes for it. 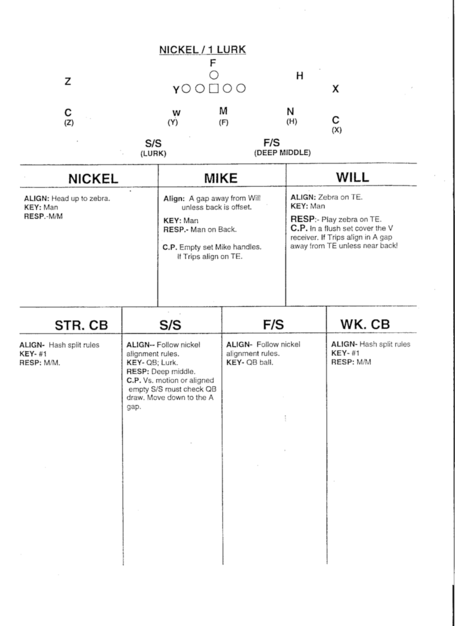 M/M means Man-to-Man. All of the notes are essentially describing responsibilities for the potential shifts in offensive alignment. They're all illustrated in the next image: 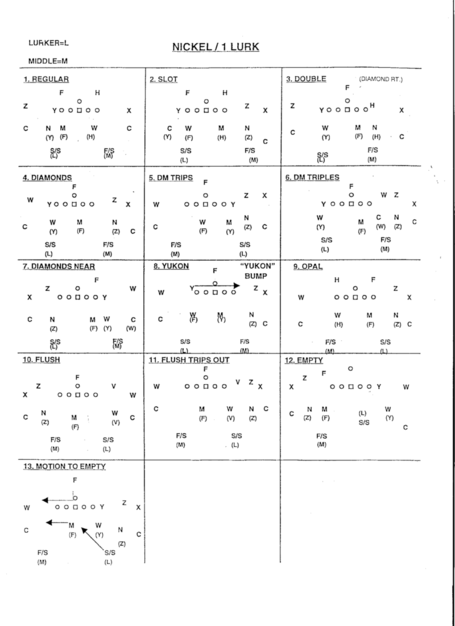 Again, it's likely that the most common 3WR formations have undergone some changes since 1998. That said, this won't be a complete guide for what the Cowboys have to align against once the regular season rolls around. I'm sure Kiffin has an updated guide for the current trends, I just don't have access to it. 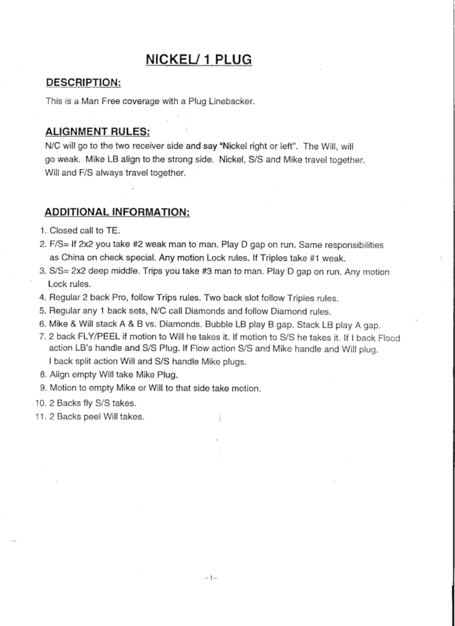 This formation is much like the last, but the underneath zone will be covered by a linebacker, while the free safety takes that linebacker's man coverage responsibilities. The deep safety this time is the strong safety.The linebacker in coverage depends on the offensive alignment - the Will and Mike read and react. 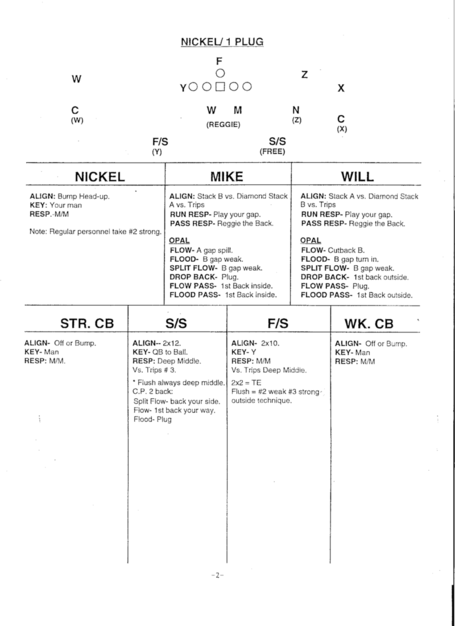 In reading the specific responsibilities of the Mike and Will, you can see that, in the case of a standard drop-back pass, the Mike is playing the middle underneath 'plug' zone. On a flow pass (crossing routes from one side to another), the Will picks up those responsibilities. 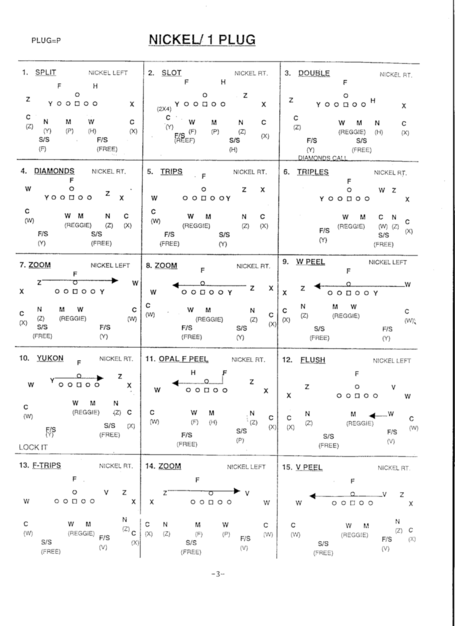 And here we have our alignments. Note in frame 2 that the safety roles have switched (assuming the "REEF" is a mistake, and "FREE" is the intention). 1, 5, 8 and 11 all definitely feature the free safety as the deep safety.

Now, we move on to the 2-deep looks many of us were expecting. 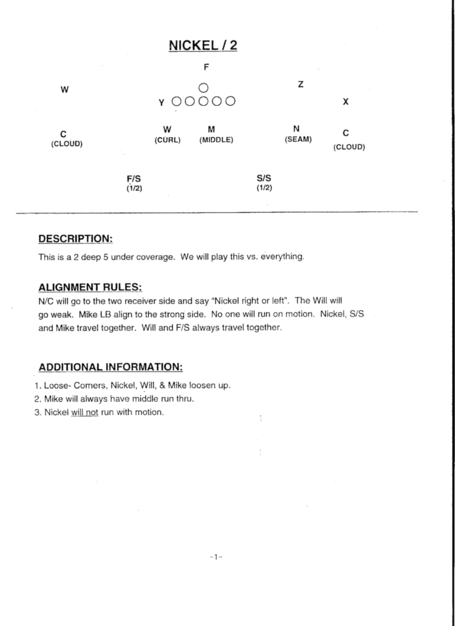 The description pretty much says it all. This is an all-purpose coverage. It does not shift with motion, meaning the Nickel and Will will be playing similar roles, even if the Will ends up playing the slot receiver. This says something about the expected skill set of the Will, as opposed to the Sam who leaves the field on passing downs. 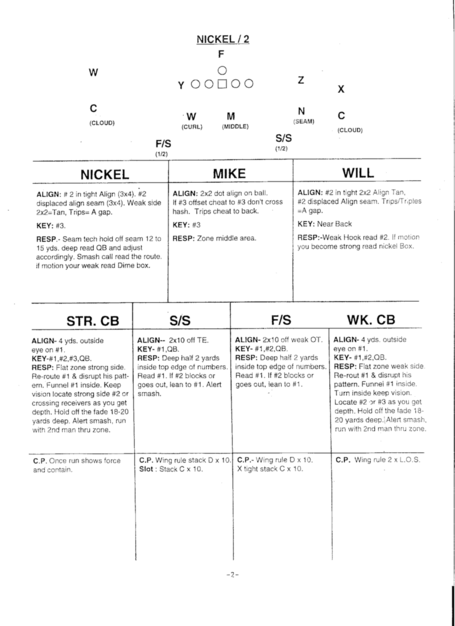 With the more advanced descriptions, we see the extent to which these responsibilities must be flexible in order to make this truly an all-purpose coverage. 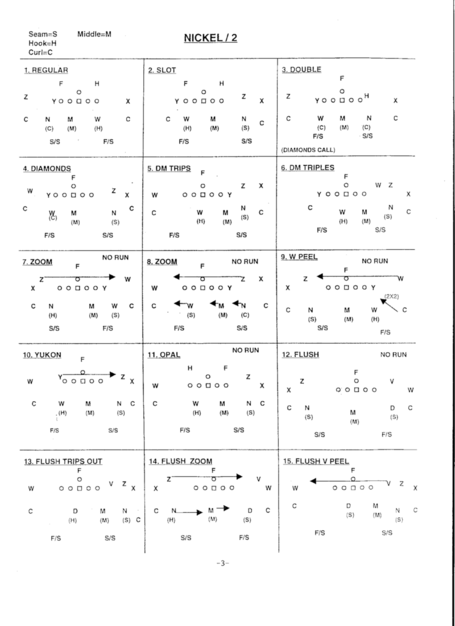 And here we see that, while there isn't any full-fledged side-switching going on, you could find yourself in a situation where Orlando Scandrick is lined up in the A-Gap, assuming there is a trips formation to the opposite side after motion.

And we move on to our final formation: the Nickel 2 Man coverage. 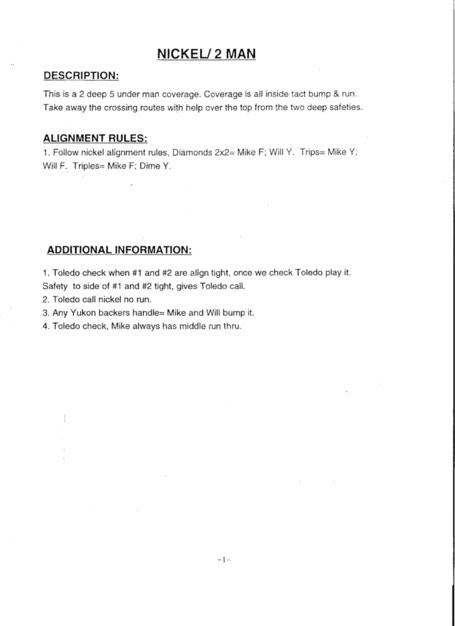 This is the other half of our 'standard' Nickel coverage. Everyone has a man, and the two safeties are deep. And the four down linemen? They're rushing, as always. 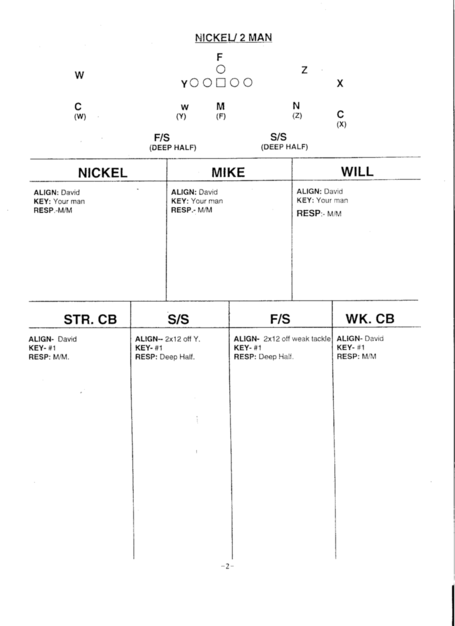 Note that, in the picture, the Nickel is playing the 'Z' receiver (traditionally the number two receiver). The 'W' receiver, traditionally in the slot, is out wide and covered by the left corner. This is an example of corners playing their positions rather than matching up with specific receivers. It remains to be seen whether or not Kiffin will play Carr and Claiborne consistently on the same side, or if he will try to identify their strengths and play them on specific men.

Schemes in which corners are locked into place can be exploited through creative matchups. Watch the Patriots spread Gronkowski and Hernandez wide with Welker and Woodhead flexed - how will a rigid scheme react? With Carr and Claiborne on TEs and Carter and Albright covering two incredibly shifty skill players? There is an advantage and a disadvantage to playing corners in the same spot consistently, but I am fearful that the disadvantage may be overwhelming. 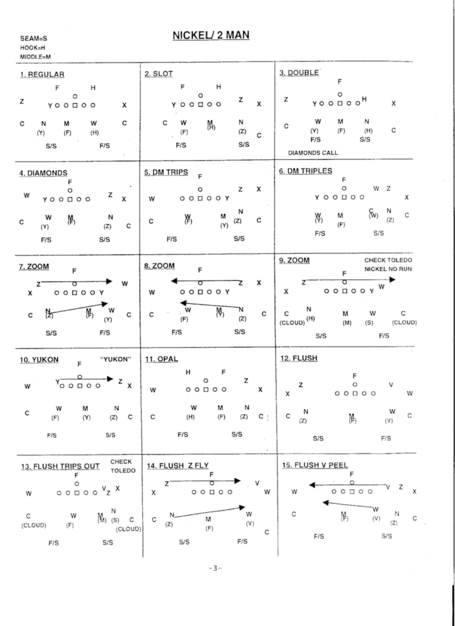 Note that, in some situations (frames 9 and 13), the coverage becomes zone. This is the 'Toledo' check, and it prevents the Nickel from chasing his assignment.

These types of reactions are meant to neutralize the schematic games I was stressing just one image above. Things look positive as far as Kiffin adjusting to other team's attempts to exploit him. It can be seen that, in it's entirety, Kiffin's scheme is not 'simplistic' but rather very adaptable. It eliminates certain areas of confusion, such as personnel groupings and sub packages, that caused problems for us last year, but it is no less a capable NFL defense that isn't simply schemed against.

Is it possible that teams last season gameplanned ways to force Rob Ryan into and out of sub packages frequently in order to generate confusion?

This concludes our coverage of the Nickel. Remaining in the playbook are the 2-minute defense, goal line defense, and blitzes, to name a few popular topics. As always, I'm open to suggestions about where to go next.