The Cowboys have stockpiled a wealth of versatile players while preparing to run Rob Ryan's defensive scheme. Ryan's out, and the decidedly less eccentric Monte Kiffin is in to replace him - but the versatility of the roster remains. What could these talents be used for? The 5-3-3 is one intriguing possibility.

Share All sharing options for: What If The Cowboys Ran A 5-3-3?

The first question you're likely asking is, "why a 5-3-3?" The answer is rather simple. I played in a 5-3-3 in high school. I can't say that I remember the intricacies of my assignments (I was a DE, so it isn't like I had much variety), I remember the personnel groupings well and that has stuck with me through the years.

The significant portion of the naming is that "5-3-3" doesn't really capture the nature of the position. It's somewhat of a tradition that, within a defense, you have the DLine, the Secondary, and then the Linebackers - who typically receive names to define their roles. In a way, the linebackers and their roles are what give life to the defense. In the 5-3-3, or at least the version I played in, there were not three, but four named positions. The "Safety" was grouped in with the linebackers, and the defense played more like a 5-4 with a pair of corners and an occasional deep linebacker.

Let me show you how it'd look: 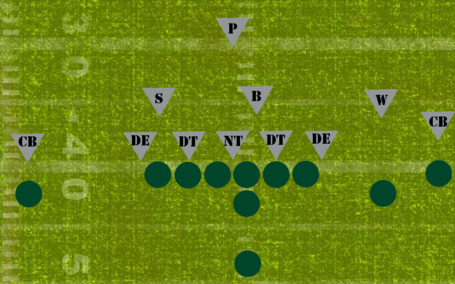 Note the four named positions: P, S, B and W. These are the positions we used on my high school team. As Joey Ickes has pointed out around here a few times, defensive terminology is far from universal, so, rather than making up Cowboys-themed positions, I'm using what I learned back in the early 'aughts.

Here are the positions:

P - Panther: Named for our school mascot, the Panther was typically in the Free Safety role. On the high school level he would be asked only to maintain depth and prevent deep plays. In the NFL, of course, there are many more possibilities for the position, including playing a piece of Cover 1, 2, 3 or 4 - along with blitzing, bracketing receivers, and dropping into underneath zones. I'd look for a 215-pound-or-so physical, rangy free safety to fill this role (Matt Johnson is my choice, and these guys do not grow on trees. Eric Reid is a potential draft target).

S - Shark: He plays the strong-side, which earns his 'S' name. He plays the same responsibilities as the Panther, but of course with different frequencies. The Shark takes the pitch-man on the strong-side option (quarterback belongs to the DE), will play man coverage on the tight end at times, and may even be asked to play in the deep secondary. I'd look for a 235-ish OLB to fill this role, and Bruce Carter is my first choice. His speed and physicality are ideal for the spot.

B - Bear: This guy requires the least in the way of man coverage skills, but should be adept at both dropping into zones and filling lanes against the run. He's the biggest of the bunch, at an ideal 240 pounds. Our obvious choice in the middle is Sean Lee.

W - Wolf: He's our version of the Will, hanging out on the weak-side of the formation as is the wont of 'W'-named 'backers. He'll be picking up slot receivers along with filling other typical roles. He has the pitch-man on weak-side options. He could be as small as 220 or as large as the Shark - with speed as a priority over raw power due to his coverage obligations. This is where I see Barry Church fitting in, though if we drafted Vaccaro he would be a great fit.

There are also, of course, two corners that you must have absolute faith in on the outside. The corners will at times be the first and last line of defense on their side of the field. Their basic responsibilities are man coverage, a deep zone, or a cloud zone.

The defensive line is a bit more exciting. The line features a 1-, 3-, 5-, 7-, and 9- technique. The interior three linemen can either penetrate or two-gap, depending on the personnel involved. Lissemore, Ratliff, Hatcher and Crawford would compose our rotation in the middle. The outside spots would be Anthony Spencer and DeMarcus Ware, just as we have right now.

So how does a formation that calls for five rushers on every down work? It's a pair of compromises. First, you compromise your back-end by having five linemen. This leaves only six players to work with in pass defense (thankfully, you can build a solid zone with six men). To make up for this seeming coverage weakness, you ensure that every linebacker you field is excellent in coverage - thus, the four named players are all suited to play both safety and linebacker and are just as prepared to defend the pass as any unit that includes any combination of Dan Connor, Bradie James and Keith Brooking (just to name a few possibilities we've seen), even with one fewer player.

A simple six-man zone would look something like this: 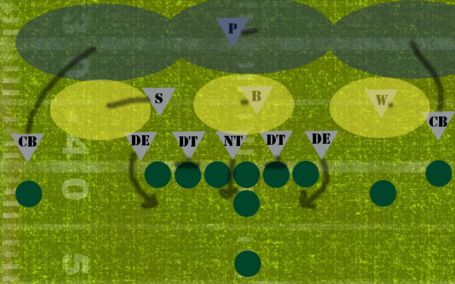 Again, notice that there is nothing behind the corners, as the single-high safety is playing the middle zone. The Shark and Wolf, however, playing their short outside zones, allow the corners to turn their backs to the play and retreat full-speed to their deep zones at the snap. A high-low route combination on the outside, however, will stress the linebacker in coverage and need to be addressed if it is exploited (a possible solution - put the corner into a hook zone outside, after faking his deep retreat, to undercut the out route).

The combinations of zones used and the frequency with which they are changed will be very important. We need to see rotations into Cover 2, occasional man looks, and even some unbalanced zones to make the most of the under-manned defensive backfield. Ideally, the five-man rush will have the quarterback on his back before he can dissect the coverage and find an open man.West Coast-style quick pass offenses will need to be stopped through gang tackling after the catch.

This team has a unique blend of extremely athletic linebackers and fairly physical safeties (oh, how I wish I could have Kam Chancellor in this scheme...) that make this formation possible. I trust Bruce Carter, Sean Lee, Matt Johnson and Barry Church in deep zones, and I trust them all playing as linebackers.

I would personally love to see the Cowboys employ something that the rest of the league isn't doing. One of the nicer aspects of this defense is that it is built to counter the option game - something the Cowboys will be seeing quite a bit of in the NFC this season - with its Wolf, Shark and wide DEnds. It also allows the Cowboys to maximize contributions from all parts of the roster, as the four named positions are more flexibly filled than the traditional 4-3 or 3-4 positions. A single substitution, with the same formation, can convert the base set into a Nickle or Dime look without changing the playbook. Against the run, you have four linebackers behind your five linemen. Against the pass, you have four safeties to back up your pair of corners, and a five-man rush on its way to the quarterback.

What do you say, BTB? Could the 5-3-3 find a home in Dallas? Or should it stay in the high school game for all eternity?