Cowboys In a 5-3-3: Further Thoughts And Formations

Explore some more potential plays as well as an analysis of their potential utility in the NFL world.

Share All sharing options for: Cowboys In a 5-3-3: Further Thoughts And Formations

When I introduced the concept of the 5-3-3, by far the largest concern from readers was that it would be vulnerable to the pass. There was a fairly widespread belief that the players in this formation simply would not be able to effectively cover opposing 3- or 4-wide receiver sets.

Having mulled over the potential outcomes of this formation in many scenarios prior to proposing the idea, I was quite surprised by this reaction. You see, I had foreseen the immediate recognition of a vulnerability in this defense, but it was of an entirely different variety.

In my view, the 5-3-3 is most vulnerable to the running game. In fact, I would volunteer that it is particularly effective against the pass. Using formation illustrations and hypotheticals, I hope to clarify this.

First, from a raw personnel standpoint, allow me to explain what makes up a 5-3-3 in comparison to actual NFL play execution. It is an oft-employed technique to send five men to rush the passer while dropping six into coverage. This is the steady way in which zone defenses tend to apply pressure to opposing quarterbacks. 6-man zones are effective in the NFL, even when executed by base personnel.

So, on these six-man zone, five-man rush plays, you can expect that four linemen rushed the quarterback. The fifth rusher is likely to be a linebacker. This means that two corners, two safeties and two linebackers are left in coverage.

Compare this to the basic concept of the 5-3-3. Again, five rushers and six in coverage. The five men rushing are all designated pass-rushers. This gives us a one-man advantage on the pass rush. In coverage, we have two corners and four psuedo-safeties. This is at least a partial upgrade over two true linebackers sitting in zones.

In other words, the 5-3-3 offers an upgrade in both pass rush and pass coverage over your typical zone blitz.

Of course, this strength comes at a cost. This alignment is particularly vulnerable to runners and blockers that get to the second level of the defense. The middle will be decidedly light, and the angles of pursuit shallower than most base defenses. A well-executed lead draw, therefore, could be very potent against this look, as well as any play that gets the running back beyond the line of scrimmage.

With that in mind, let's look at some plays. 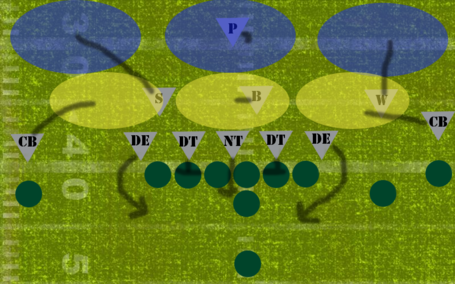 With this diagram, I hope to drive home the point that S, P, W, and even B should all be capable of playing as safeties. We're talking about Bruce Carter-level athletes (or at least in that conversation) who can run and hit. Compared to the linebackers that would normally be manning the underneath zones, these guys should be noticeable upgrades.

The corners are being asked to form a shallow Cover 3 with Sean Lee (our Bear, if we ever will have one), knowing that they have, from left to right, Bruce Carter, Matt Johnson and Barry Church backing them up in their own 3-deep look.

On the line, Ware and Spencer are taking the edges. Hatcher and Crawford are looking to knock back the guard and tackle, respectively, before choosing their rush lanes, and Ratliff is aiming for the strongside A gap. The two-gap technique by Hatcher and Crawford is required until the threat of run is gone, in order to maintain gap integrity. 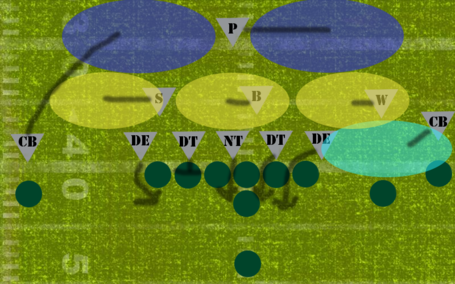 This is a rotation concept aimed at deterring West Coast teams from exploiting their matchups on quick throws.

The corner immediately takes the flat in order to secure the quick passing lane. Behind him, the Wolf takes up residence in his shallow third. The Panther comes over from the middle to put a lid on the weak side.

The Bear and Shark are completing the shallow thirds, while the strong-side corner is maintaining depth on both the receiver across from him and the tight end (ie. 'man' coverage on the way to his deep half).

The extra presence on the weak side by the corner and Wolf allow an inside move from Ware and Hatcher while the strongside line assignments remain unchanged. The chaos on the weak side of the line should help alleviate the stress on the strong-side corner. 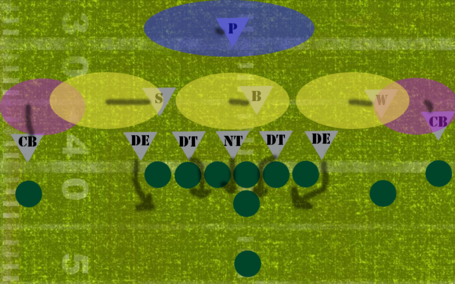 This odd-looking formation is meant to defend the line-to-gain on third- and fourth-down situations. The purple zones are for hook and comeback routes - a common choice in these situations. The typical shallow thirds are allowed to squeeze in somewhat with the assistance of the corners outside, while the Panther is on alert for the deep route.

The corners are responsible for following their receivers deep if necessary, but they'll be playing the comeback routes and therefore will not have depth on their receivers.

The threat of the run is considered somewhat lessened in these 3rd-and-medium+ situations, so the DTs are pinching inside immediately to prevent the quarterback from stepping up to read the zones. 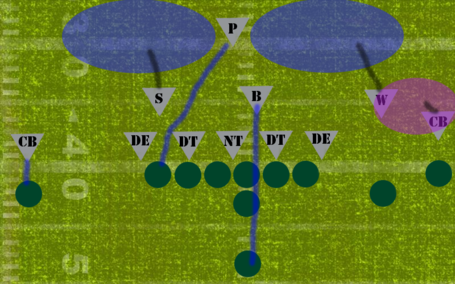 This, I will admit, is a rather strange play. The Shark and Wolf are providing a Cover 2 shell, while the three strong-side threats are picked up in man coverage and the weak-side corner plays the shallower portion of his side of the field.

This play would be applied only in specific scenarios, as it could obviously be exploited if run with any regularity.

There is no prescribed DLine technique here, as a man coverage can be called in nearly any situation. 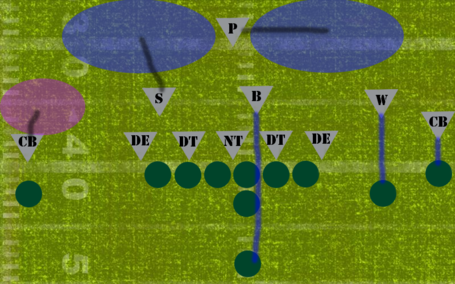 As Part 2 of the man coverages, this play makes me feel a bit more at ease than the previous one. Of particular relief is that the strong-side corner is clearly threatened more by his receiver than the tight end, while the previous play featured two threats in close proximity covered by a single corner.

This look is helpful in providing what seem to be favorable matchups in both the man and zone portions, and seems like it would prove particularly effective against route combinations, screens, and other plays meant to attack perceived weaknesses in this scheme. 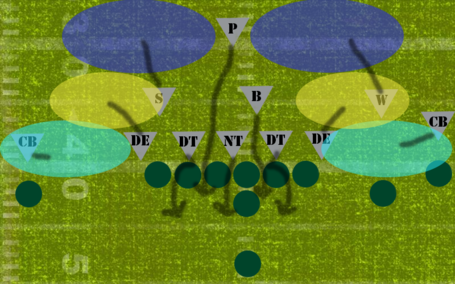 You didn't think I could complete this without a blitz, did you?

The overall concept of this play is to pressure the middle while protecting the outside. It protects against most immediate passing threats, while hopefully providing pressure fast enough to escape the longer-developing and deeper combinations.

The DTs are running counter-moves to the outside, which are intended to draw their opposing linemen out of position to prevent the blitzers from penetrating the line.

I like corners in the flats, because their athleticism gives them a legitimate chance to beat the receiver to the ball, especially with the lobs that are typically thrown in this area of the field. Having two DEs with extensive experience in coverage allows us to make that happen.

What do you think, BTB? Has your position on the 5-3-3 changed since it was first introduced? Is there anything else you would like to see illustrated?