In The Cowboys Film Room: Outside Zone

We're stepping inside the film room to take a look at what will likely be the Cowboys base run scheme in 2013.

Share All sharing options for: In The Cowboys Film Room: Outside Zone

His hiring clues me into something very important about what the Cowboys run game will look like in 2013. They will be moving to a zone blocking scheme. This means they are looking for lighter, more athletic offensive linemen, like a certain prospect from the Tarheel state. This also means that we as fans need to have a good understanding of what the basic runs look like in a ZBS.

We will start our analysis today with by taking a seat in the film room to look at the bread and butter play for this running style, the Outside Zone, also known as Wide Zone, Stretch, & Boss plays (remember there is no universal terminology in football).

First we will look at a some shots of a play from the Houston Texans run game in 2012 in one of their match ups againts the Jaguars. 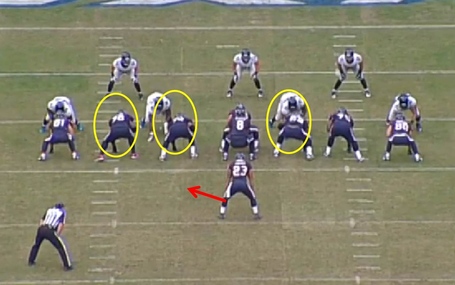 Here we see that the Texans are lined up in 12 (1 back 2 TE 2 WR) personnel, lined up in the balanced "Ace" formation with both TE's in line. The Jaguars counter in an Over front in a 4-3. As you can see by the arrow, this play will be going to the Texans left.

One of the benefits of the ZBS is that the scheme stays the same no matter what front or scheme you're facing from the defense, and no matter what formation you're lined up in as an offense.

The most important concept for the ZBS is the "covered" & "uncovered" linemen along the O-Line. When they come to the line of scrimmage, each lineman must determine whether they are covered or not. The key for the linemen is whether there is a defensive lineman lined up anywhere from their play-side shoulder, all the way to heads up with the adjacent linemen to the play side. I have circled the covered linemen in this instance in yellow.

The covered linemen are the ones who are responsible for executing their scoop blocks and actually blocking the D-lineman who is "covering" them. The first step of the OL will be a lateral step to the play side, and attempt to "scoop" around the D-lineman and get his body between his man and the sideline. If the D-Lineman reacts to this by trying to stay outside of the block the O-Lineman will shift to trying to push him all the way to the sideline.

Important to remember, because the responsibilities remain the same regardless of offensive formation, the TE doesn't count as a linemen to be covered, which is the reason that Duane Brown, the Texans LT is considered covered. 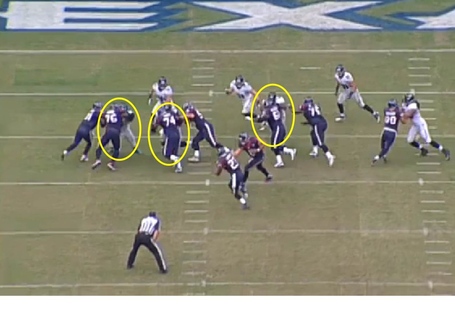 Here we see the play starting to develop and a vital part of this scheme, the combo blocks, are taking form. I still have the covered linemen circled. So we see that Brown (76) has executed his scoop block and successfully gotten outside to the DE. The TE has stayed put to keep the DE within Browns reach, the left guard is in position on the DT, with help from the center to get the guy moving.

Foster is starting towards his initial target, the outside butt cheek of the TE. The RB has two reads on this play, first the DE, if he see's that DE trying to stay outside of the OT he will move to his second read, if the DE tries to "wrong shoulder" or come inside of the the OT, he will simply bounce the run and take it outside of the DE.

The second read is the DT, if he stunts inside of the OG Foster will go outside, if the DT stays on the outside shoulder of the OG Foster cuts all the way back inside of him. But its important to note, this read only happens if the DE tries to stay outside and establish the edge in contain. 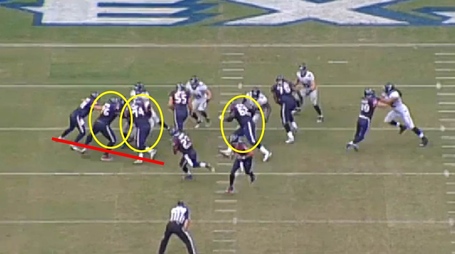 A couple of steps after the hand off we see Foster running again parallel to the line of scrimmage, and we see the covered linemen now in 1-on-1 blocks as the uncovered lineman have bounced off the combo blocks and moved up to the 2nd level to attack the linebackers. At this point Foster has completed his first read, (the DE) which is telling him to bounce.

We see that the play side linemen and TE have created a lane for Foster to bounce through for a good gain. 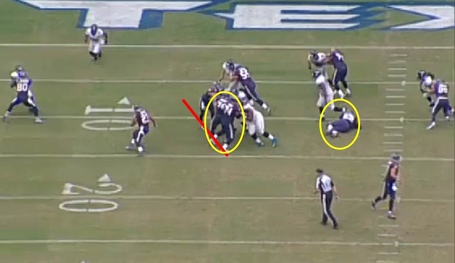 A few steps farther we see the size of the hole Foster has to run through, and we see the center and backside OG up on the LBs keeping them from scraping over to make the tackle. Andre Johnson (80) is getting a good block on the CB and Foster has a solid gain.

If all goes well in 2013, we will see runs like this on a very regular basis from the Cowboys.

As we continue on in the off season, we will continue run schemes the Cowboys will be implementing in 2013, and how they will use DeMarco Murray, Lance Dunbar and a likely draft pick to impact the game on the ground.