Let's take a quick look at some information on Tavon Austin that dispell some questions about him as an NFL prospect.

Our fearless source of all great information OCC (aka the GOOG) posted an article recently featuring an email trail between the Front Page writers discussing what would happen if the Cowboys drafted someone outside of the positions fans have been clamoring for since January. In this thread, I made the statement that if the Cowboys were to draft Tavon Austin with the 18th pick, they would instantly have the most dangerous offense in all of football. Of course this statement drew some mockery from people like KD who although he sees the value in Austin's elite skills, insists that adding weapons to the team is useless without augmenting the offensive line.

Many comments on that thread pointed to KD's statement that "if Austin got 7 carries a game behind the current OLine he would be out by week 5."

So what I'd like to look at first is Austin's durability.

Austin never missed a single game in college. Every year from 2009-2012 West Virginia played 13 football games, and Austin played in every game. Yes, I understand that the NFL game is different from college, but you can't ask a player to do any more than to show up for every game on the schedule and play, and that is exactly what Austin did. More impressive than that is the fact that in those 4 yrs (52 games), Austin touched the ball, on a return, catch or carry 528 times, 405 of which came in 2011 or 2012, and never missed a game.

Also, Darren Sproles, who came out of Kansas State in 2005, measured at 5'6" and 187 lbs at the combine that year. That's 2 inches shorter and only 12 pounds heavier than Austin, and Sproles has been a very productive player in the NFL He missed one year due to injury, and outside of that 2006 season, he has played in all but 5 games in his NFL career.

Next I'd like to take a look at what Austin does on the field that makes him so special.

Former NFL scout, and current NFL Network draft analyst tweeted several weeks ago that he charted every one of Austins 15 offensive touchdowns (that's right, 15 touchdowns in 13 games, not counting returns) and that 14 of the 15 would have been Touchdowns in a 2 hand touch football game. So, playing in the Big XII against players who will play in the NFL, Austin scored 14 times untouched.

Let's take a quick look at one of his TD's against Oklahoma in 2012 to get an idea of the player he can be. 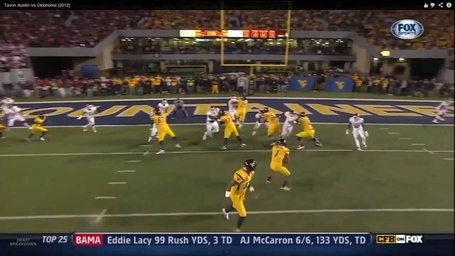 Here we see Austin taking a hand off in the Red Zone on an Inside Zone play (Note: the WVU offensive line was not very good either). Notice the immediate penetration inside the ROT and by the contain man for OU. 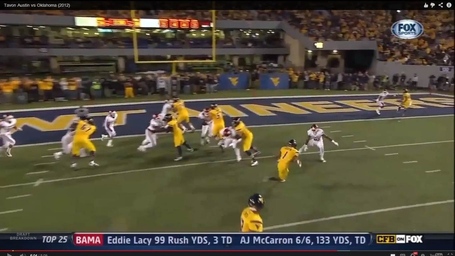 Here Austin looks to be dead to rights, the defender has kept himself outside of Austin in spite of his efforts to bounce the run outside. . 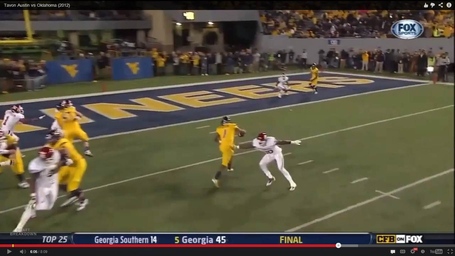 But Austin's elite level elusiveness leaves the defender completely out of position only able to get one hand on him. Here you can also see the CB beginning to come forward in support. 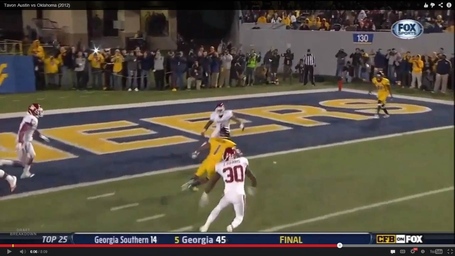 Again, Austin looks to be done, he has 3 defenders surrounding him. 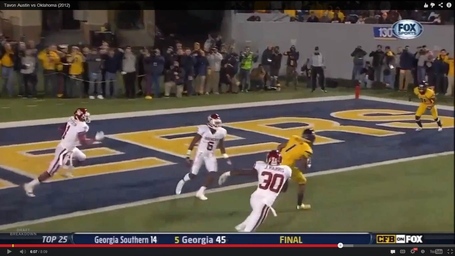 But he leaves the only one in position to keep him out of the Endzone standing flat footed watching him go around the corner for a TD.

The best way to compensate for a sub-par offensive line, is to have players who you can get the ball to in space quickly, and they can make their own plays (this is what "Romo Friendly" really means). If my offensive line can't keep guys out of the back field, the last thing I want is a big bruising runner, because that guy will never be able to get his momentum going in order to use that power. If you have guys in the backfield regularly, you want to have guys on your team that can make those guys miss.

If I told you your first round pick would score 11 TD's his rookie year, and touch the ball ~200 times I guarantee everyone here would take that production.

Let's not let the fact that he is 5'8" and 175 lbs prevent us from seeing the value of the player.