[Video] Dallas Cowboys Draft Recap, Plus A Look At The 90 Man Roster

The draft is over, what did the Cowboys get and who slots where?

Share All sharing options for: [Video] Dallas Cowboys Draft Recap, Plus A Look At The 90 Man Roster

The Cowboys have now completed their draft season. Bringing in a total of seven players over seven rounds, they then turned around and signed 12 additional prospects as undrafted free agents. That brings the Cowboys roster to 89 of the off-season limit of 90 players.

Of course, some of these names won't last, as the club is sure to bring in players to "compete" at punter and place kicker (in reality, to give the starters rest) during training camp in Oxnard, CA. Also, the club does have some cap space left and there's a certain conversation that Jerry Jones and Doug Free will be having soon.

Before we look into slotting the players on an offseason depth chart, let's review exactly what it is that Dallas got in the draft itself.

Here's a look at the 90 man roster, separated by offense and defense. The order on the depth chart is my best guess as to how the players will enter the minicamps and finally training camp.

Click on each picture to expand it to full size. 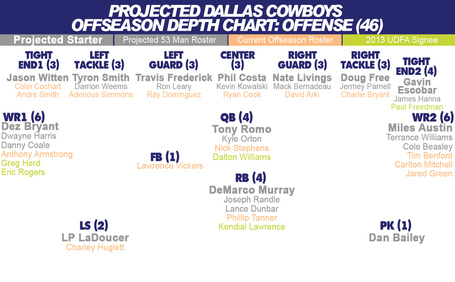 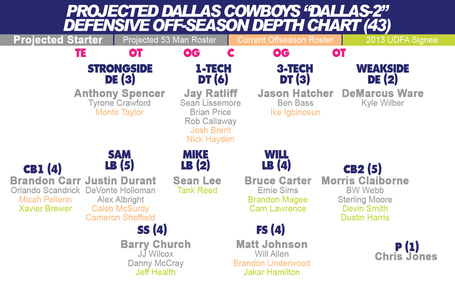 A couple of notes on who I chose to be on the 53 or the outside looking in. First, there are some UDFAs that I think have a shot to make the roster above vets, namely Brandon Magee and Jakar Hamilton.

The Cowboys have $3 million plus in cap space savings (and very little in bonus money) tied into Lawrence Vickers, Ryan Cook and Danny McCray. I think they knock off at least two of those guys if not all three. Each brings something unique to the table, Vickers the only fullback, Cook the only player that can man all five line positions and McCray has elite special teams prowess. We'll see how it all shakes out.

Now, celebrate... the first Cowboys game is less than 100 days away!