On The Chalkboard: Attacking The Cowboys Cover 2 (Part III)

How will teams look to attack the middle of the field against the Cowboy's cover 2 defense? Let's look at the 'Dagger' combination to find out.

Share All sharing options for: On The Chalkboard: Attacking The Cowboys Cover 2 (Part III)

As we continue our look at the Cowboys new defensive scheme, let's take a look at one more "Cover 2 Beater" before we move on to learn some other coverages we'll see from Monte Kiffin's unit in 2013.

If you want some back ground take a look at our previous chalkboard sessions below. (Just select the article you want to view from the drop down list) 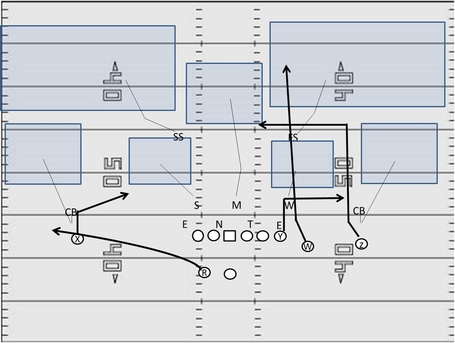 Here we have the offense with 11 (1 back 1 TE 3 WR) personnel on the field, aligned in a Trips Right Far formation, with the QB in the shot gun. The defense has their base personnel on the field (something Cowboy fans will see MUCH more than in previous years), aligned in the Over front. Notice for the defense how the Will LB follows the 3 technique DT to the strong side.

As we look at the closed (strong) side of the formation, we see that the #1 (outside) and #2 (slot) receivers to the right side will run a Dig (in-cut) and a seam route respectively. These two routes make up the "Dagger" combination and work together to attack the middle of the field against cover 2.

So how does it work?

As we remember in our look at the techniques played by each defender, we noted that the MLB will turn his hips and run with any immediate threat to the inside vertical seam. So by having the W receiver run a seam route, the offense can force the Mike to run with him up the field. This then allows the Z receiver to run his dig route, at the standard depth of 12-15 yards and break back underneath the Mike. The Z will run his route over the top of (behind) the Will LB in his zone drop.

I have supplemented this basic dagger combo with a 'hi-lo' concept by having the TE (Y) run a flat or quick out route. Teams do this in order to try to pull the Will forward off his land mark and open up a bigger throwing lane for the Dig route.

As we look back side we see the most common route run on the backside of Trips, the Slant, run by the X combined with a flat route by the RB to create a horizontal stretch on the defense.

The dagger combination is something that Monte Kiffin, and Rod Marinelli's defense will have to face every single week. So how do they stop it?

The key to stopping this and most any other route combination when playing Cover 2, is generating pressure with the D Line. If DeMarcus Ware, Anthony Spencer & Co. can get quick pressure on the QB, the 2 deep shell will prevent a quick shot down the field, and force a check down to either the TE or RB in the flats. Then, as we've talked about before, it's up to the defense to swarm to the ball and make a tackle.