Inside Monte Kiffin's Playbook: The Blitzes

We've learned all about the "Cover" part of the Cover 2 defense family. Now, we get to look at the blitzes.

Share All sharing options for: Inside Monte Kiffin's Playbook: The Blitzes

The beauty of the Tampa 2 is that its base defense holds up well in almost any situation. It can handle the run, the pass, and the play action. Of course, there are ways to attack any scheme, and our own Joey Ickes has been proliferating explanations of route combinations that do just that.

While it would be nice to rush four every down, generate consistent pressure, and relax in our zones to pick off lame duck tosses, the reality won't ever be so simple. A large part of playing aggressive defense is hitting the opposing players, particularly the quarterback. Sometimes, you need a bit more pressure to get to the quarterback's head (literally and figuratively). This is when we blitz.

We've all been trumpeting (myself included) Monte Kiffin as a polar opposite of Rob Ryan. This might leave some thinking he's reluctant to blitz. The first blitz in his playbook should counter that thought process somewhat. Oh, and if you thought Kiffin didn't have any tricks up his sleeve, this is where you'll be corrected. 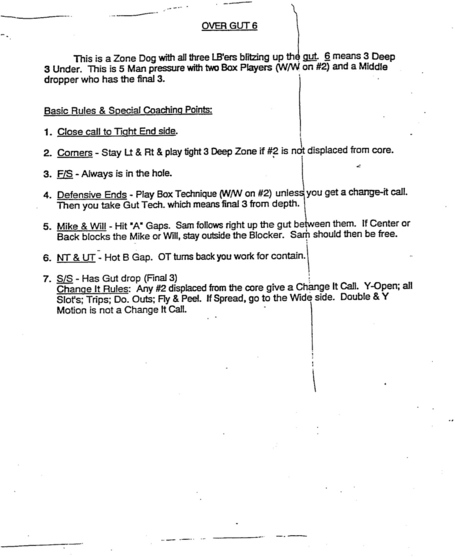 What do we have here? First, all three linebackers are blitzing. I like it. The tackles are opening up the interior offensive line, while three linebackers attack the Center and generate quick pressure up the middle. The defensive ends, however, are another story. They're playing box technique (think Wide 9 alignment if you need a visual) and sitting back. Technically, they'll be aligning with the second-most-dangerous receiver on their side of the formation. It's starting to look like a blessing that our defensive ends have lived past lives as linebackers.

For more on the box technique, check out this link to a Matt Bowen article explaining the concept. (Thanks to Joey Ickes for providing me the link!) 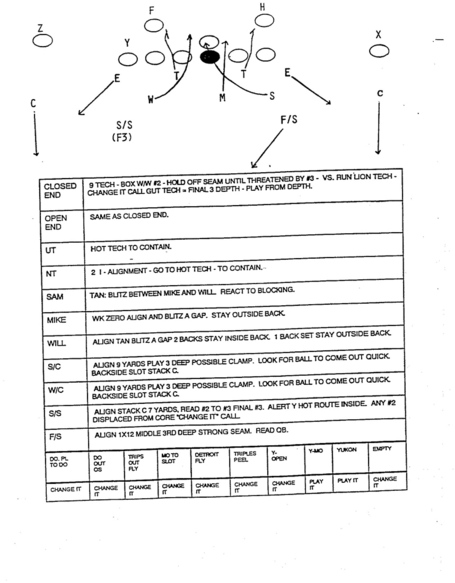 Here you have a graphical representation and also another listing of the responsibilities of each player, as well as some scheme adjustments based on the looks the offense might present. You can see the defensive ends lined up on the #2 receivers on each side, the tight end on the left and the halfback on the right. 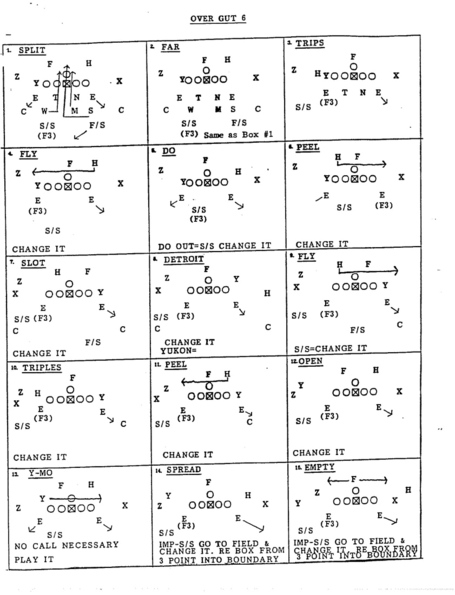 Finally, we see the visual representations of the adjustments for each specific offensive formation. The key changes are the defensive ends occasionally exchanging coverage responsibilities with the strong safety, to prevent the DE from being drawn out beyond the 9-tech.

The goal of this scheme is to generate immediate pressure in the quarterback's face. If not a sack, the blitzing linebackers will obscure short throws to the open middle of the field, and the defensive ends may be able to obstruct an ill-advised hot read.

If the pressure doesn't reach the quarterback, however, the middle of the field will be wide open to crossing routes. This is still preferable, however, to a scheme that leaves a deep route open - preventing the touchdown is the highest priority.

Kiffin outlines one more blitz in his playbook: 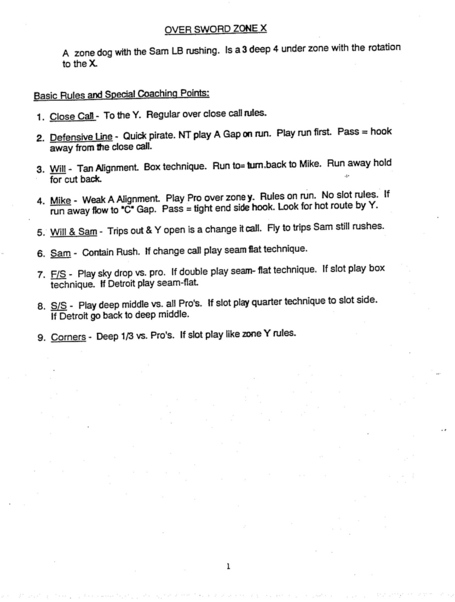 It's hard to tell from reading the assignments, but there's something especially peculiar about this blitz scheme. Check the image below: 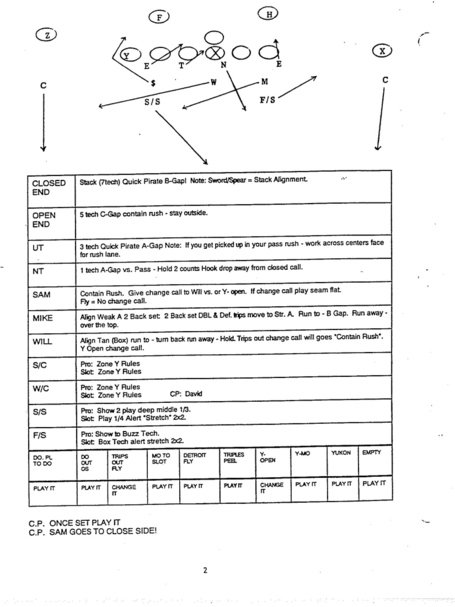 And there you have it. The nose tackle is playing a hook zone. The Will, and at times the free safety, is playing a box technique (which is what the DEs were doing in the previous play). You'll also notice that the Will and Sam are lined up next to each other in this look. This might be more easily disguised in the (unlikely, in my opinion) scenario that Lee and Carter are used interchangeably at the Will and Mike positions.

On the more interesting topic of the nose tackle dropping into coverage, I wonder what 1-technique would be able to effectively play that role aside from Ratliff. Experts consistently say that the Cowboys need a very large 1-technique, but this play seems to call for the smaller, more athletic variety of tackle. 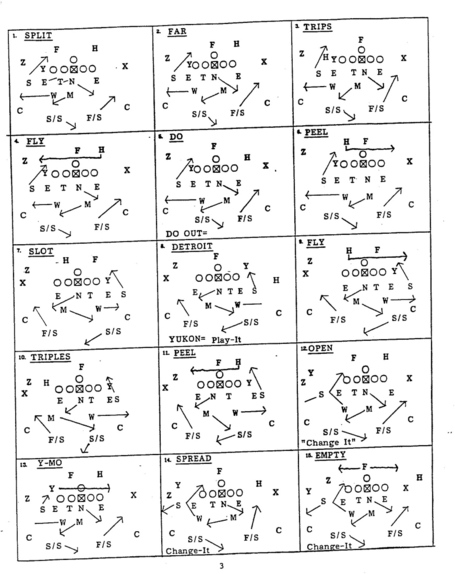 The adjustments show a small amount of variety. The Will will take the Sam's blitz if the Sam is schemed into coverage. The Nose is in a zone on virtually every iteration of this play.

This is a fairly conservative blitz predicated on rotation. The secondary rotates one way, while the linebackers rotate in the opposite direction. Four men playing zones underneath gives more time for the five man rush to get home, and the Nose being among those in coverage is a wrinkle that may catch some quarterbacks off-guard. Even if teams practice countering this look, it will be practice time not spent working against our base defense, and therefore will still benefit us on Sundays (of course, that was the theory with Tebow helping an offense, too).

These two plays are the only blitzes included in the playbook that I have (which only amounts to 183 pages in all), but fortunately they showed two of the more interesting blitz concepts we'll be seeing - dropping linemen into coverage. Personally, I hope to see these techniques employed sparingly in keeping with the Rushmen moniker. If, however, they are employed effectively, I would be very happy to see DeMarcus Ware, Anthony Spencer, or Jay Ratliff come down with an interception off of these shenanigans.

What do you think, BTB? Should we employ these exotic blitzes with any frequency, or should we simply let the Rushmen rush?

You can select previous articles from the "Inside Monte Kiffin's Playbook" Series from the dropdown menu below. Simply click on the article you want to read and the article will (or should) open in a new tab.