Gerald Sensabaugh is retiring as a Dallas Cowboy after spending the last four years playing for the Star.

Share All sharing options for: Gerald Sensabaugh Retires As A Dallas Cowboy

The Dallas Cowboys announced yesterday that they had signed a one-day contract with safety Gerald Sensabaugh that will allow him to retire as a Dallas Cowboy. The Cowboys will place him on the reserve/retired list today, bringing Sensabaugh's eight-year NFL career to an end.

Sensabaugh was originally a fifth-round draft pick for the Jacksonville Jaguars, where he played from 2005-2008 before joining the Cowboys. In his four years with the Cowboys, Sensabaugh started 60 of 62 games, recording 306 tackles and eight interceptions.

His patience finally paid off when he signed a long-term deal in December 2011. Ironically, that long-term deal was at least partly responsible for his release in March 2012, as he had been scheduled to make $3 million in 2013 and would have counted $3.8 million against the cap.

Public perception of Sensabaugh's play was driven to a large extent by the safeties he was playing next to in his four seasons in Dallas. In his four years, he played next to four different safeties, none of whom were retained by the Cowboys to play safety for the next season: Ken Hamlin (2009), Alan Ball (2010), Abe Elam (2011), Danny McCray (2012). Yet despite the specific challenges presented by each of these partners, Sensabaugh graded out positively in his first three seasons in Dallas according to Pro Football Focus:

In 2012, Sensabaugh's level of play fell off as he battled through knee, calf and head injuries. Yet despite those injuries, Sensabaugh stayed on the field to coordinate a ragtag bunch of defensive backs signed off the street as the Cowboys defense was hit hard by injuries, a fact that has gone largely unappreciated.

Sensabaugh gave Dallas a few good years at safety. He was a solid, slightly above average player, and there is nothing at all wrong with that. Sure, he was not the playmaking safety the Cowboys would have liked to have, but he was certainly better than anybody else the Cowboys managed to bring in during his time in Dallas.

Sensabaugh will turn 30 next month, and while he drew some interest in free agency and probably could have landed a spot somewhere for training camp, he decided to go out on his own terms, with his health still largely intact. Not a lot of people can say that. In a statement released by his agent, Sensabaugh hints at what lies ahead of him:

"I am forever grateful for the opportunities given to me by the NFL and the Dallas Cowboys. I look forward to the next chapter in my life, being a full-time father, supporting the newly reorganized East Tennessee State University football program and enjoying my passion for bass fishing."

Good luck, Gerald. Thank you for all the years you played for the Star, and thank you for reading BTB. 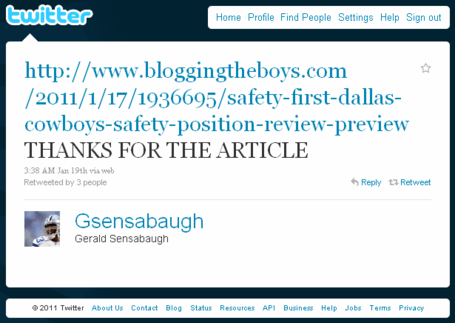 Do The Cowboys Have An Identity Problem?