As Cowboy fans we have all seen this offense sputter at times. But are the issues related to Play Calling, or Execution? Let's go back to the film room to find out.

Share All sharing options for: In The Film Room: Cowboys Offensive Struggles... Play Calling, Or Execution?

It has become popular for fans and media alike to blame head coach and play caller Jason Garrett when the Cowboys offense struggles. People say that his schemes aren't creative, and that teams have figured out his offensive system thus making it easier to stop. However, after every game, we hear guys like Jason Witten, and Tony Romo, the leaders of the offense, talking about how the coaches put them in position to succeed, but that the team failed to execute the plays that were called.

Let's look at an example from the 2012 season finale against the Washington Redskins to see why Jason Garrett doesn't get nearly enough credit for the creativity in his offense. 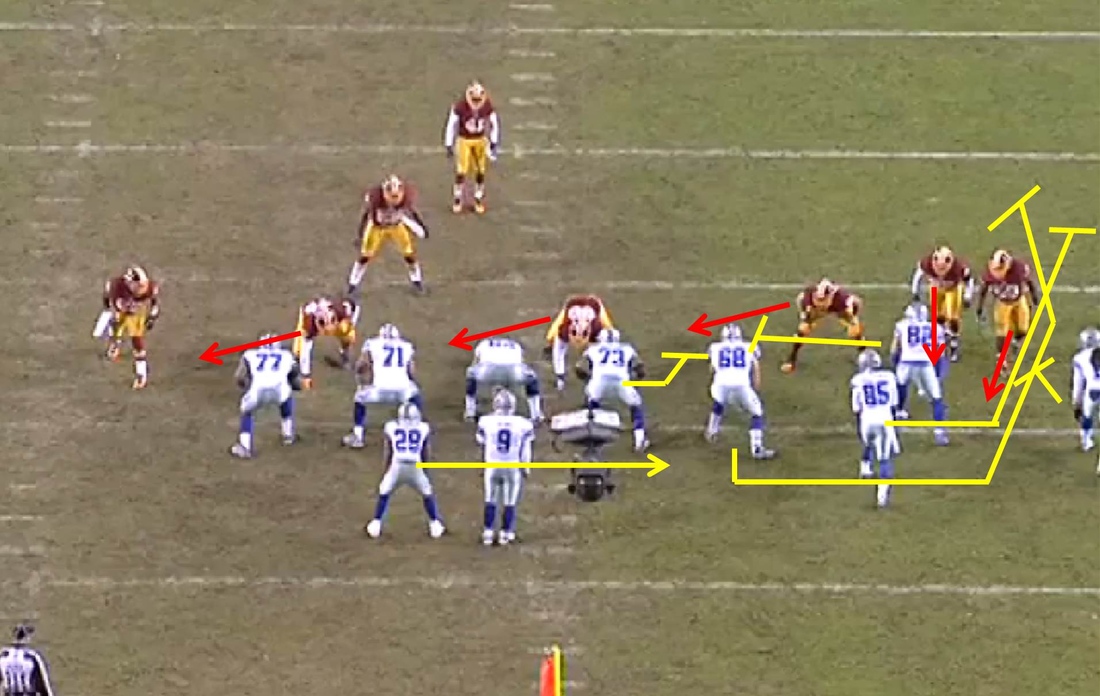 Here we have the Cowboys in 11 personnel aligned in a bunch set to the right side of the field, with a single X receiver (Dez Bryant) lined up outside of the picture to the back side. Romo is in the Shotgun with DeMarco Murray aligned next to him, about a half step closer to the QB than he normally would. The blocking scheme for this run play is a variation of the Outside Zone play, called "Pin & Pull." In the Pin & Pull the TE will block down, to replace the OT, as the OT pulls around the outside to try to give the RB a lead blocker going through the hole. The snap is going to go direct to Murray, who will then run the play exactly like he would any pin & pull outside zone.

Washington is bringing pressure on this play, as they did much of the night. The DL are all slanting hard to the Open side of the formation, and both the NB & the LB aligned outside the DE with the bunch are rushing as well.

So what do I like so much about the design and call of this play?

This play is full of window dressing, lots of noise for the defense to dissect, while leaving every blockers assignment the same. The bunch set, the direct snap, the faked high snap by Romo, all of these are things that draw the defense's attention. The Cowboys had played 15 games before this one, and shown this formation several times, but hadn't run this scheme out of it. 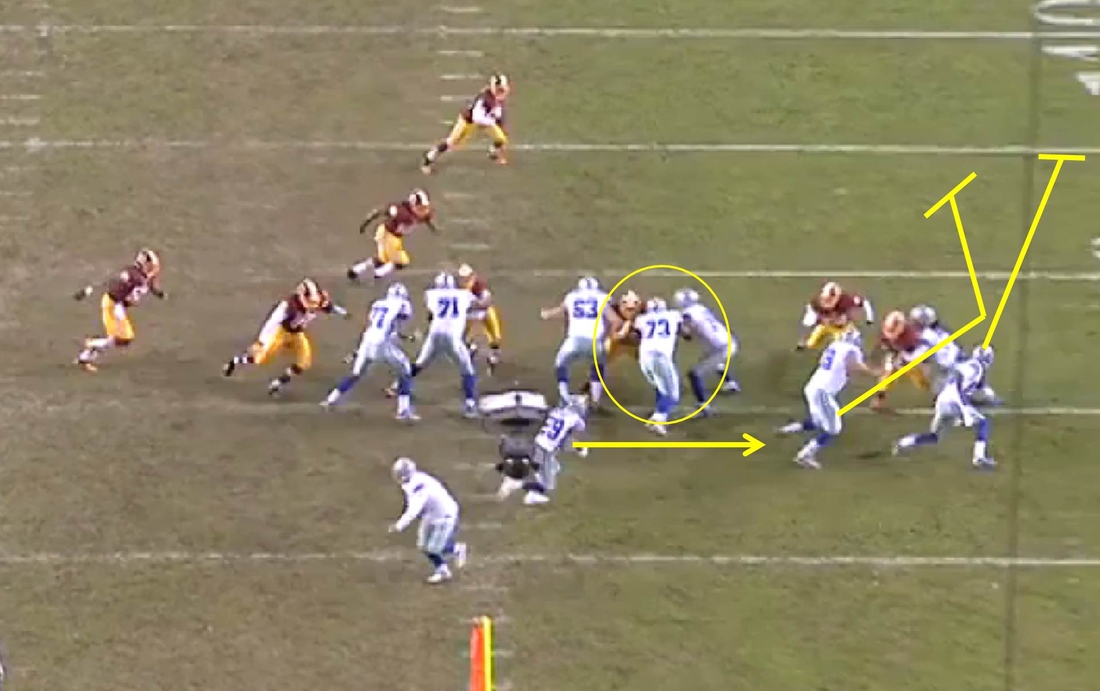 Here we see Murray on his path to the edge, with Witten & Mackenzie Bernadeau combo blocking the slanting DE, Dwayne Harris is trying to set the edge on the LB who is blitzing by him, and Doug Free and Kevin Ogletree are working outside to the second level. 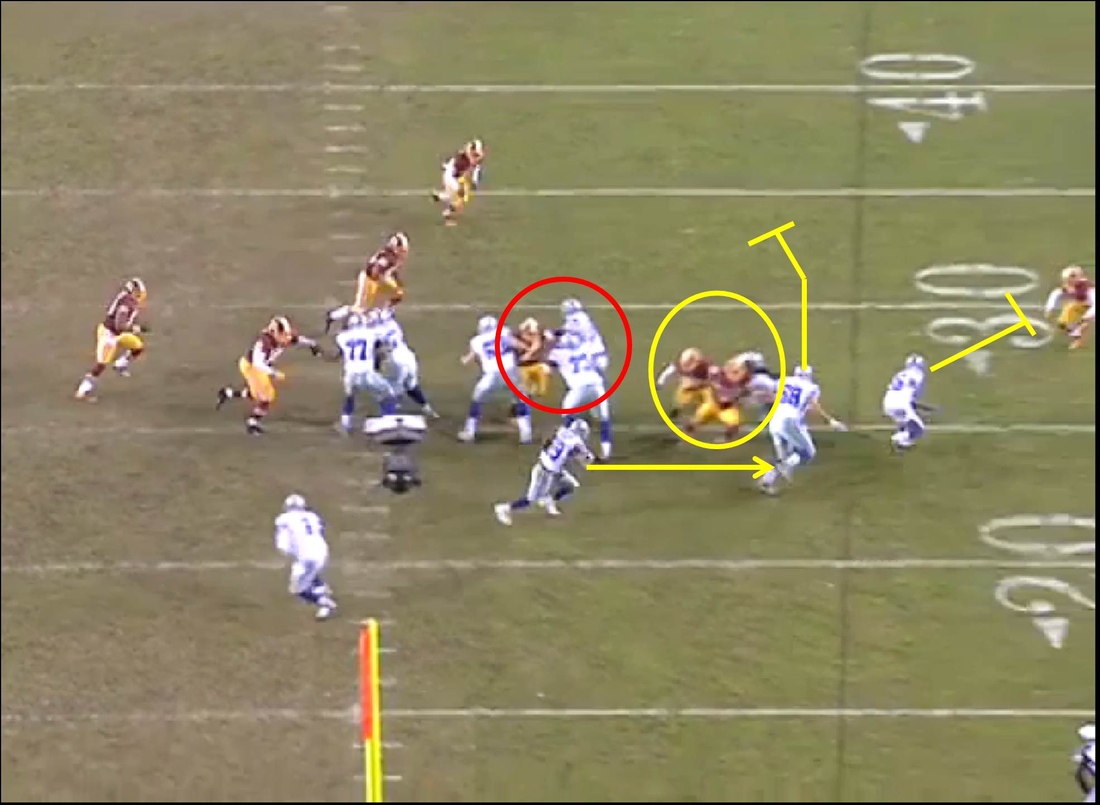 Here we see Murray continuing to press to the edge, and Harris & the 2 blitzers in the Yellow circle. Harris does about the best job you could expect as he compresses the gap they have to get through to the hole. He pushes them into one another's path, which frees Murray to the outside. Free continues to work around the corner and Ogletree has the CB in his sights, and Witten is circled in red, coming off the combo block to move to the second level and seal off the LB. So far, so good. 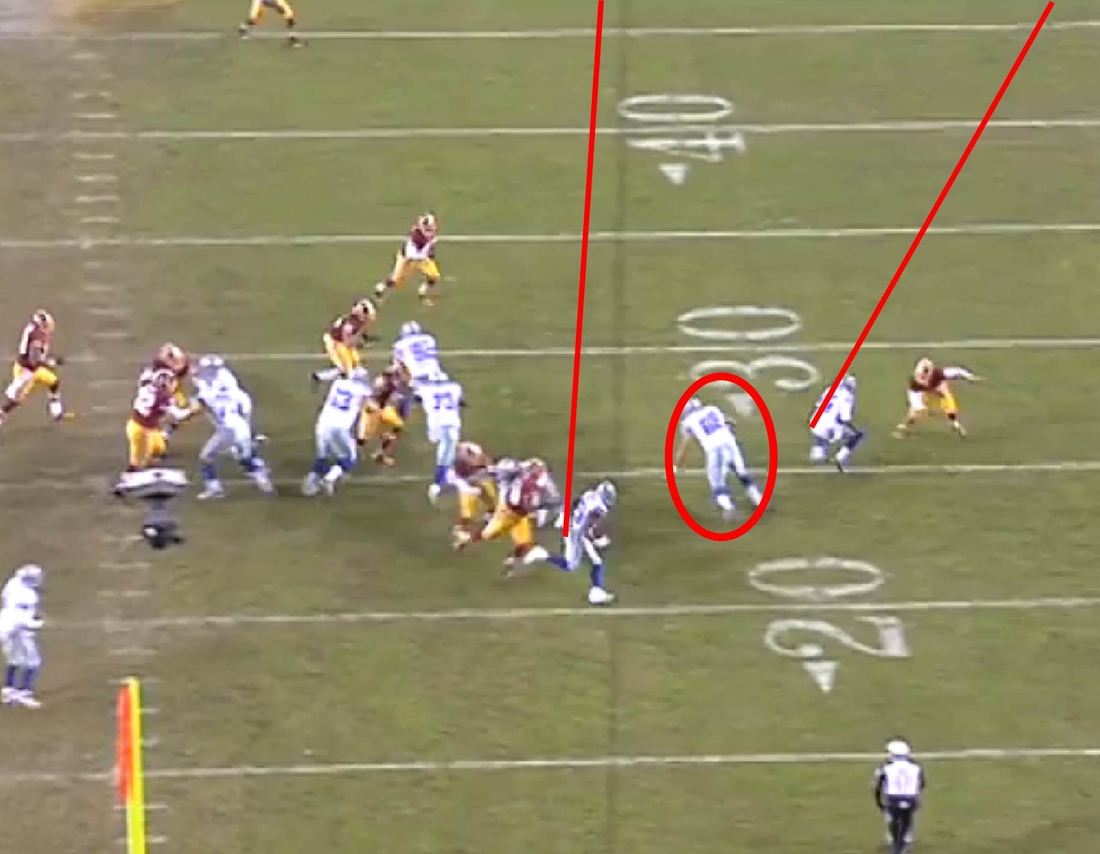 Alright, here's where we can get excited about the play, right? Look at the 2 red lines that represent the space Murray will have to run in once Free makes is block on the safety to spring the run. However, circled in red, we see Free stumbling. How could one little stumble by an OLineman in space hurt a play this well drawn up 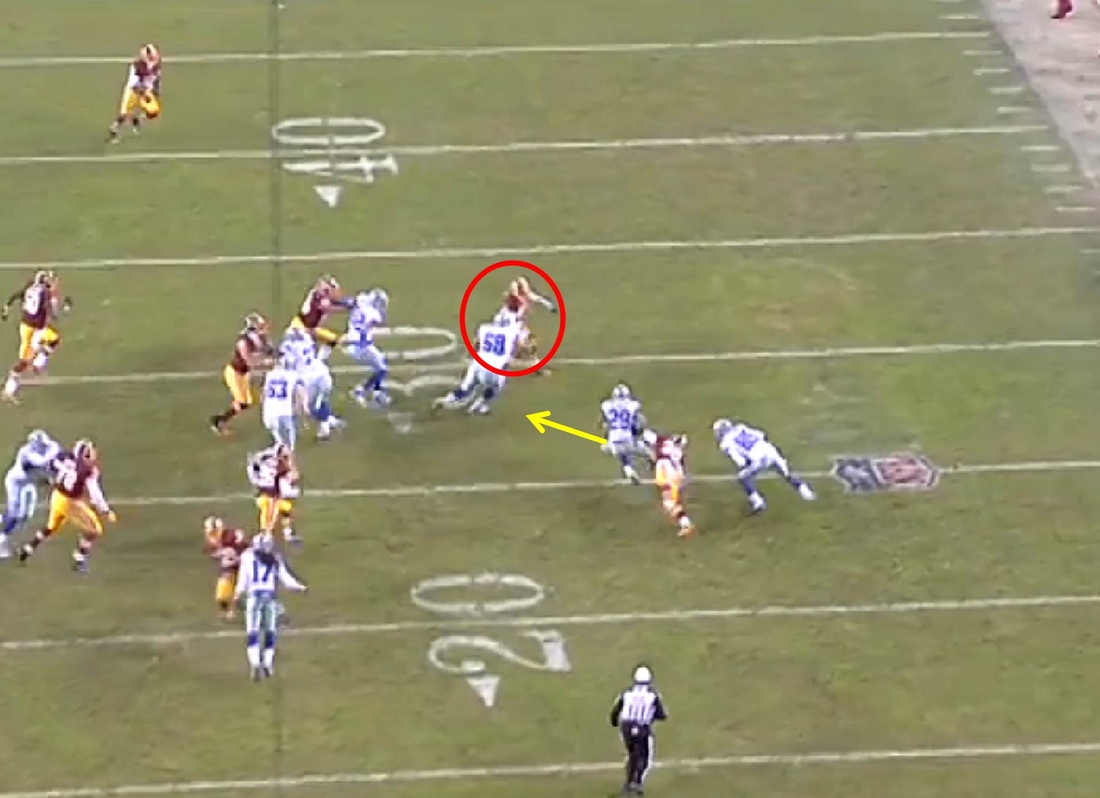 Now we see that because Free stumbled, the safety is able to take the angle and get his head past him. This means that Murray no longer has a clear path to the sideline and has to make a cut back, right into the on-coming pursuit. 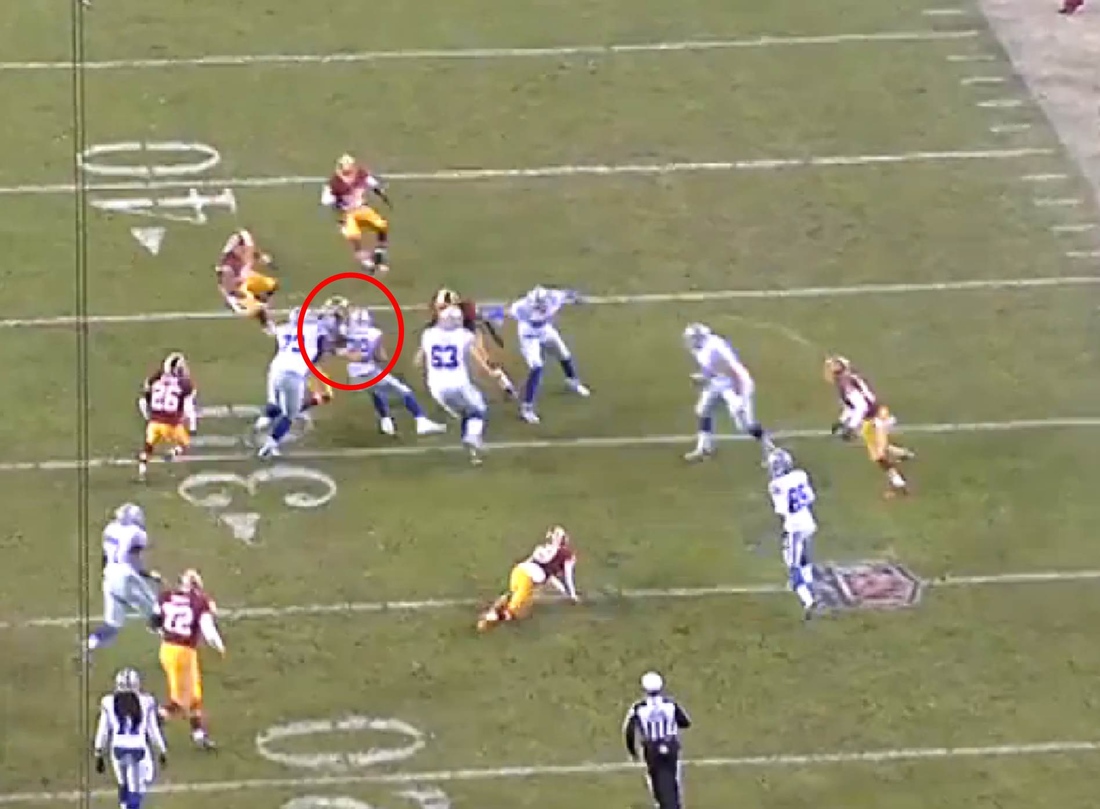 Now Murray is in the grasps of a Redskin defender, and help is coming. The play netted a 7 yard gain and the Cowboys kicked a field goal on this possession, however, we all know how dangerous DeMarco Murray can be in space, especially with only a safety to beat before it becomes a foot race to the end zone.

The Cowboys offensive staff did a good job drawing up this play and called it in the perfect situation, they caught the defense slanting away from the run and had Murray in position to make what could have been a game changing play late in this crucial game. But one stumble by the right tackle turned an explosive play into a 7 yd gain, and the number one story-line of the Cowboys off season has turned into, Who is going to call the plays? If you ask me the important part, and I'm sure the reason why the Cowboys are in no hurry to make that decision, is that they need to focus on getting the players to take better advantage of the opportunities they have.

Cowboys Play-Calling: Addition Does Not Always Cause Subtraction

Boom Or Bust: Which Teams Like To Draft Players From Non-BCS Divisions?