The Cowboys' left tackle had a good year on the field in 2012. Off the field, his life was strange and painful.

Now that the Doug Free contract circus has ended, we know who the main players are going to be when the Dallas Cowboys start figuring out the offensive line starters during the OTAs next week. Free will primarily be challenged by Jermey Parnell for the starting right tackle job. Travis Frederick is the presumptive starter at center, but he could move to a guard position if Phil Costa comes back strong, or Costa could be in the mix to play guard himself. The other leading guard candidates are Nate Livings, Mackenzy Bernadeau, and Ronald Leary. The only position that is set at this time is left tackle, where Tyron Smith is generally acknowledged to be the best player in the group, and the one member of the big uglies last year that could be relied on week in and week out.

That says a lot about Smith. Not as an athlete. As a human being. Because, as was documented here when it originally happened, he was being hounded and harassed, put through an emotionally draining and financially damaging ordeal right in the middle of the season. 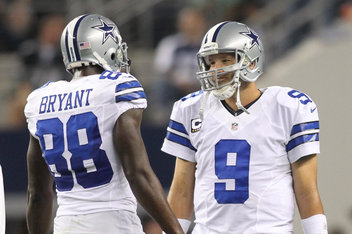 As good as this year's rookie crop may be, it'll be on the Cowboys' veterans to get the team to the postseason.

By his parents. The people that most of us rely on to be there, no matter what, instead were relying on their son. They saw him as an ATM, and after the withdrawals had gotten somewhere around a million dollars above and beyond what he had offered to share with them, they threw a fit when they were told they were overdrawn at the Bank of Tyron.

For the first time since the incidents of last October, Smith has spoken about his problems in an interview with the Dallas Morning News. He was forced to get a protective order against his parents that also prohibited his siblings from contacting him on their parents' behalf. His sisters were involved in the October incident, and a brother had to be removed from training camp at Oxnard last summer. Ian Rapoport had a perfect summation.

How did he play with all this happening? RT @nfl_atl: Cowboys' Tyron Smith talks about difficult family ordeal nfl.com/news/story/0ap…

For most of us, the whole situation is somewhat unfathomable. For a parent to see their child as nothing more than a source of income to support them, an oddly perverse "Sugar Kiddy", and to do so with absolutely no concern for whether they are overtaxing the income is just wrong. Remember, Smith signed a four year, $12.5 million dollar contract, out of which he had to pay taxes, his agent, and was only a year into the contract when the parents allegedly took that cool million bucks, over and above what he had already shared with them.

The family made no bones about how they felt about Tyron.

Early last year, Cowboys coach Jason Garrett told Smith he would be moving to left tackle. Smith sent a text message to his parents to share his good news.

The text Smith received back didn't offer congratulations or say anything about how proud they were of him.

"They were already looking forward to the next contract, talking about things they wanted to get already," Smith said. "I was like I haven't even got there and there's not even a sure thing that I will. And that was all that was coming out of their mouth."

Now, with the protective order in place, perhaps Tyron can be more focused on playing. Hopefully, this will be a good year for him, and for his linemates. It is rather amazing he has been this good so far. Still one of the youngest players on the team, he is also showing he is one of the most mature.