Since 2005, the success of the Cowboys' rookie classes has been highly erratic. But a look at the playing time of each rookie class suggests there's reason for optimism about the more recent rookie classes.

How Much Will Rookies Contribute in 2013? 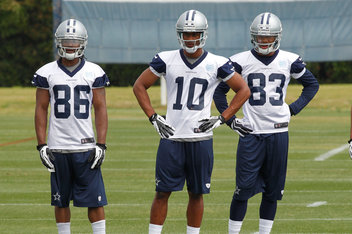 We went in a slightly different direction last week when we took at the the number of snaps played by each of the last five Cowboys draft classes, and found that the 2011 draft class played in 7.6% of the total offensive and defensive snaps in their rookie season, the highest value of the last five years. But is that high enough, or still too low? How much is good enough?

You often hear about how getting two solid starters out of a draft class can be considered a good draft. Perhaps not a great draft, but a solid draft at least. Two starters out of 22 total starters equals nine percent, so if your rookie class comes close to that percentage in its share of snaps played, you could argue that the rookie class was equivalent to about two starters, and thus a success.

The other thing you often hear about evaluating a draft class is that it usually takes three years, sometimes even more, to judge a draft. And that's exactly what we'll do today. But instead of looking only at the snap percentages of the drafted players, we'll look at the snap percentages of the entire rookie class, including UDFAs and tryout players that make the roster. In his post-minicamp press conference Garrett talked about how it doesn't really matter for the Cowboys where a player comes from, and that while some organizations pride themselves in how many draft picks they keep, what the Cowboys want to do is field the best team they possibly can.

"We talk about the guys we draft, the college free agents we sign; but we really try to go through the process of bringing the tryout guys in," Garrett said. "We try to do that the right way as well, because, again, you never know where you can find football players. We want to be very deliberate and thorough in deciding who those tryout guys are."

What this allows me to do is to show how different rookie classes performed in terms of snap percentage in each of their first four years in the league. The graph below illustrates what this looks like:

Now take the green bar, the 2010 rookie class. Obviously, we only have data through 2012, which would be the 1st, 2nd and 3rd year in the league for that class. In its first year, the 2010 rookie class notched a solid if unspectacular 6.9% of all offensive and defensive snaps, but in its second year (2011) that value more than doubled to 14.3%, the highest second-year value that can be observed using the data we have. In the third year (2012), particularly with the injuries to Phil Costa and Sean Lee, that percentage dropped again. Overall though, the 2010 rookie class looks to be one of the best in recent years.

The 2011 rookie class, marked in purple, looks equally promising and had the highest snap percentage (8.5%) of any of the last five rookie classes in its rookie season.

The 2009 rookie class is the very obvious odd man out, with values below 5% in all four years - and I've generously added Roy Williams' snaps to the total. Without those, the numbers would be much lower, as you can see in the table below.

The standout class here is without a doubt the 2005 class, marked here in light blue, which returned the highest value of any class in its fourth year with 16.3%. That is the equivalent of 3.6 starters playing every single snap in 16 games. Quite a haul for the Cowboys.

Overall, I'd say that the graph corresponds nicely to the way we collectively view the past couple of drafts. 2005 was an excellent rookie class, 2007 and 2008 could have been better, the 2006 and 2009 classes are forgettable. And with this historical perspective, the last three Cowboys classes all look quite promising.

For those who prefer their numbers without all the eye-candy, here's a table with all the data:

From the data accumulated in this little exercise, it looks like adding the equivalent of two starters (or 9% of all snaps) to the roster is a good target for the first year of a rookie class. In the following years, you'd probably want to come out with the equivalent of three starters (13.6% of all snaps), and everything above that is just gravy.

The Cowboys have not hit those marks all that often, which is one reason the team has had to bring in new players via free agency almost every year. If you hit on three starters per rookie class, you'll be on a roughly seven-year cycle of roster renewal, and wouldn't need to bring in all that many free agents. When you only hit on two starters per rookie class, that cycle extends to eleven years, which is much longer than the average span of an NFL starter's career, and you'll end up having to plug holes with free agents at often high costs to your salary cap.

If you get four starters per year, your cycle drops to 5.5 years. That means that you’ll generate a surplus of starters who are at the beginning or in the middle of their second contracts. And what do you do with those guys? You trade them. Preferably for high draft picks, like the Patriots did with Richard Seymour or Mike Vrabel. You then end up with more draft picks, which in turn will help you draft even more starters. It’s really quite simple.

And, health permitting, the Cowboys rookie classes from 2010-2012 should all yield at least three starters this year:

Using the simple math outlined above, that should put the Cowboys on a roughly seven-year roster cycle, which in turn will have long-term beneficial effects on the Cowboys' salary cap. It also provides the Cowboys with a simple message for salary-cap thief John Mara of the New York Giants:

"Drafting well is the best revenge."