BTB Community Friday: Get To Know Your Cowboys Bretheren!

We take some time away from the actual news, to pow wow with those that make this community what it is.

Share All sharing options for: BTB Community Friday: Get To Know Your Cowboys Bretheren!

Hello everybody. My name is KD, and I'm a Cowboys-a-holic. I figured there isn't a better time to get to know each other than the slow period that is... well... now. It was suggested by Scott Maui that we do an exercise for everyone to exchange twitter handles and the like, and I thought it was a great idea. As you know, you can follow me on the BTB main handle @BloggingTheBoys but also my personal handle @KDP10For10. You should follow me on both!

Please share with us ways to keep in touch with you off the blog- there's no reason we can't keep the conversation going outside of the site! And no offense meant to our Sisters in Cowboys Worship, don't let the title fool you!

I got intrigued by the NFL, being a maniacal baseball fan, during the NFL Strike of 1987. I became an interested observer of the Dallas Cowboys because of stupid Redskins fans during that strike season, and then became fanatical during the single victory on the 1989 season.

During this era, my link to the Cowboys (living in Maryland) was Sports Illustrated. No cable, no internet, no local newspaper coverage. I learned about Tom Landry from the likes of Rick Reilly, here. 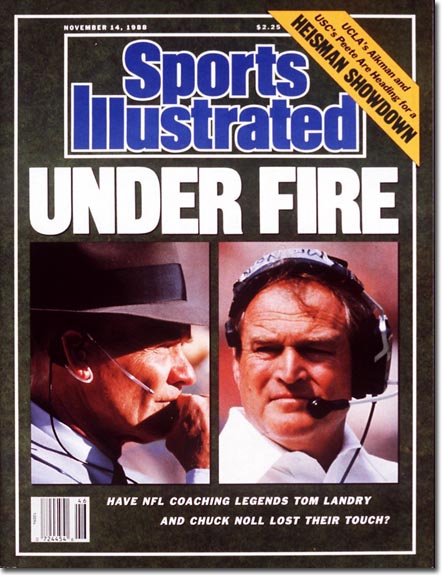 Yes, Rick Reilly used to serve a purpose. When 1-15 happened, I spent that "1" day at my Uncle's house, surrounded by Skins fans save for me and my Aunt Peggy. I declared that the lowly, winless Cowboys would win the game, and they did, 13-3. I've been hooked ever since. Go search the Sports Illustrated vault to see how folks like me followed the team during the Jimmy Johnson era. It's a whole different ball game.

Now, a quarter century later, I'm basically defined by my fandom. Dallas is my obsession and I'm blessed with the opportunity to share my thoughts on them with the fine readers and followers of BTB. Although it may not seem like it sometimes (wink, wink) I am extremely humbled by the fact that people actually want to know what I think about this team. I was recognized in a CVS a couple months ago as the Cowboys Youtube guy. Did I mention I live in Maryland? Surreal.

Thank you, one million times, Dave Halprin. I'd crash through walls for you in appreciation of the platform. Reference, 2013 Draft Weekend.

Us BTB'ers aren't the only ones on Social Media. The Goog has collected a listing of all 59 current Cowboys that are using the service, and we present them for you. Feel free to follow the list that I've created: Cowboys Players.