The Cowboys have let a number of their players leave in free agency, but haven't cut a lot of established players outside of Gerald Sensabaugh, Dan Connor and Marcus Spears - yet. That may change over the coming months.

The Cowboys will be entering training camp with 90 players, the same amount as last year, and ten more guys than in previous years. But the roster cuts will be the same as they've always been: As in previous seasons, the first roster reduction will happen at 4:00 PM ET on August 27, the Tuesday following preseason Week 3, when rosters will have to be trimmed to 75 players. The final roster reduction to 53 players will have to be completed by 9:00 PM ET on Saturday, August 31, a day after the final preseason games have been played.

Along the way, and perhaps even before those cut-off dates, some players that few of us will have expected will likely end up getting cut.

Last year, the Cowboys cut Kyle Kosier, Terence Newman and David Buehler at the beginning of the league year in mid March, added safety Brodney Pool to the list of cut veterans after a week of training camp and cut ties with Stephen McGee after camp.

Cowboys 4-3 Defense: Which Players Are The Worst Fits? 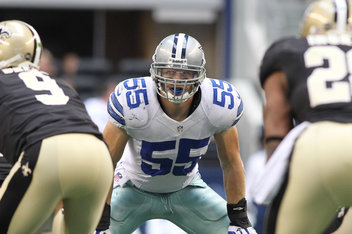 Which holdovers on defense are least likely to excel? Who are the worst fits for the new scheme?

In the year before that, the Cowboys cut seven big-name veterans. At the start of the (delayed) league year, on July 28th, 2011, the Cowboys cut Marion Barber, Marc Colombo, Leonard Davis and Roy Williams. The Cowboys later followed that up in a second wave of cuts by releasing three more veterans after training camp in Andre Gurode, Igor Olshansky and Montrae Holland.

This year's first wave of cuts - Gerald Sensabaugh, Dan Connor and Marcus Spears - remained relatively moderate, which could mean that the second wave of cuts, during or after training camp, could see more big-name players released.

Early candidates to not make the 53-man roster team could include Lawrence Vickers, whose role may become obsolete with the increased emphasis on the 2-TE set (and who would save $1.2 M in cap space). Other candidates could possibly include OC Ryan Cook (now probably third or even fourth on the depth chart at center and a $1.1 M cap saving), LB Ernie Sims (who will likely face some serious pressure from the young guys) and S Danny McCray (too much competition to survive as a teams guy only).

Also, as rabblerousr pointed out earlier this week when he looked at which players could be bad fits in the new scheme, DT Sean Lissemore and LB Alex Albright may find themselves without a clear role in the new defense. As much as I'd hate to lose either guy, I think the upside is that both should have some trade value. There's a novel concept for the Cowboys: How about getting something in return for the players you're not planning with?

Also, as much as I'd like to think each 2013 draft pick will make the team, outside of perhaps the top four or five picks, nobody is guaranteed a roster spot. In 2011, the Cowboys released CB Josh Thomas (5th rd) and FB Shaun Chapas (7th rd) during final cuts and released WR Dwayne Harris (6th rd) later in the season. The latter two both made it back to the practice squad. In 2012, the Cowboys released Danny Coale (5th rd) during final cuts but were able to re-sign him to the practice squad.

With 90 players competing for 53 spots, there are bound to be some surprise cuts. Who do you think could be the surprise cut from the team this year?