Share All sharing options for: Comparing 2013 NFC East Rosters: Top 10 Players Under The Age Of 25

On Friday last week, I wrote a post in which I proposed a list of the top ten Cowboys players under the age of 25. The post generated quite a lively debate, both for the arbitrarily defined cutoff at 25 years and for it's perceived lack of quality players further down the list. 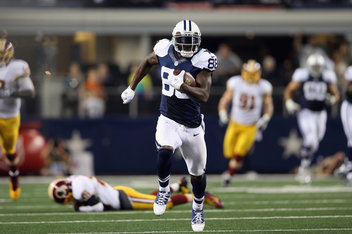 A look at who the top ten Cowboys players under the age of 25 are.

One question that was asked repeatedly, was how the Cowboys' young talent compared to the talent on the roster of the other NFC East teams. So that's exactly what we'll look at today as we review the same top ten list for the Giants, Eagles and Redskins.

Quick reminder about the criteria for making the list: The list can only include players who will be under 25 at the start of the 2013 regular season on September 5. And to avoid populating the list with a lot of hot air, each team only gets their top pick from the 2013 draft included in the list. As much as fans of each team love their draft picks, none of them have yet had a single practice in full pads with their teams, much less played an NFL down.

The table below shows the top 10 players under 25 for each NFC East team, and individual players are sorted by where they are slotted on the Ourlads.com depth charts, with a blue background denoting starters, green indicating backups, yellow shows players ranked third on the depth chart and red is for players ranked fourth or lower at their position.

As you review the table as a Cowboys fan, you may argue that Matt Johnson should be penciled in as a starter, and that James Hanna is still ahead of Gavin Escobar on the depth chart. Fans of the other teams will have similar comments about their players, which is why I think using the Ourlads depth charts is a good choice as they provide a fairly neutral view of what is what.

Overall, this chart suggests the Giants have the strongest under-25 class of players, with the Cowboys coming in second. The Redskins have the great advantage of having a starting quarterback on this list. The other three teams all have QBs over 30 years of age, and while the Giants and Eagles have stocked up with QB talent recently, the Cowboys are the only team without a developmental QB on their roster.

Also, keep in mind that the five hardest positions to fill on any team are QB, LT, CB1, WR1, and pass rusher. Our own rabblerousr has repeatedly argued that these are the five most crucial positions on a team, or what he calls Positions of Great Import (POGI). The Cowboys have three starters under 25 at these POGIs, the Giants have two, the Eagles and Redskins both have one. Other players in the table above may over time emerge as POGI starters, but for now they're not.

Finally, as you peruse the names above, also consider that each team has key players who just missed the age mark. For the Cowboys, Sean Lee, Bruce Carter and DeMarco Murray didn't qualify this year; Ryan Kerrigan and Trent Williams missed the cut for the Redskins; Hakeem Nicks and Jacquian Williams didn't make the list for the Giants this year; the Eagles would have loved to have LeSean McCoy, Jeremy Maclin, Brandon Graham or Vinny Curry beef up their list.

As you carefully peruse the names on this NFC East list, how do you feel the Cowboys stack up?