Have you been wondering what the Cowboys most recent draft board looked like? Well wonder no further, because once again the board has been leaked and BTB has every player, slotted just as they were in the Cowboys' war room!

Share All sharing options for: Dallas Cowboys 2013 Draft Board Leaked: All Seven Rounds!

In the week following the 2010 draft, a bunch of intrepid BTB readers captured screen shots from video taken inside the Cowboys war room and brilliantly constructed an almost complete version of the team's 2010 draft board. Well, I'm pleased to announce that, thanks to a similar set of images taken in the team's war room during day one of the 2013 draft (see below), we have reconstructed the team's 2013 board. 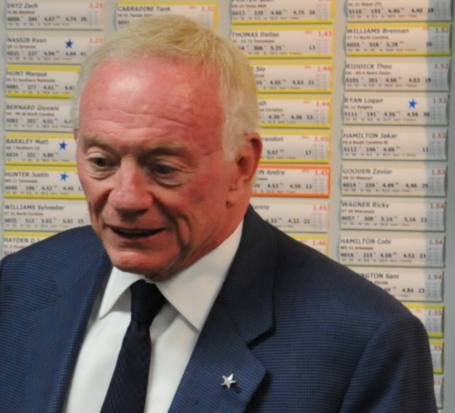 In this and other photos, you can see the board in the background with the players' names aligned on it. Behind Jerry, you can see the players ranked by round. To his right (our left) hung a whiteboard with the various positions broken down by round. By careful examination of these images, I was able to reconstruct the position-by-round board:

Number of players: We had heard before the draft that the Cowboys wanted to include only players on the board that they were sure they wanted, so they were working to develop a leaner, more "pure" board. This board has 132 players on it, which is actually pretty close to the one that leaked in 2010, which had 129 players.

Deep draft: We heard time and again that this was a deep draft, particularly in the second and third rounds. While Dallas' second round isn't overly populated, the third round is rich (and, somewhat surprisingly, so is the fifth).

Late rounds: It appears the team didn't feel there were many players deserving of sixth and seventh round designations. This makes sense, if we consider that they are trying to draft only players who have a legit chance to make the club. There are, however, a lot of guys on whom they are willing to take a chance: a bevy of names populate the "priority free agent" designations at the bottom of each position column.

Players not on the board: It looks like there are several categories of player not on the Cowboys board:

1. Injury or character scratches: First rounders Jarvis Jones, Alec Ogletree and Matt Elam aren't on Dallas board. Neither are RB Christine Michael, WRs Keenan Allen and Robert Woods, CBs Tyrann Matthieu and Therold Simon, or DE Sam Montgomery. Clearly, its still important that the players they draft are "RKGs." Further, the team seems to be moving away form selecting talented yet injury-prone players. Several guys with injury histories - Marcus Lattimore, or the aforementioned Jones, for example - are nowhere to be found.

2. Bad scheme fits. You'll notice that three big defensive tackles who received a lot of ink before the draft as possible fits at the one technique - Johnathan Hankins, John Jenkins and Montori Hughes - are not on the Cowboys board. Jesse WIlliams? Nope. As the guys who were on the board suggest, Kiffin and Co. wanted defensive tackles in the 300 pound range who offer quickness and penetration more so than the ability to stand up two rival O-linemen.

3. Wrong size, Charlie: Similarly, they tended to downgrade short receivers (Marquise Goodwin received a sixth round grade; Ace Sanders was nowhere to be found) and small corners (B.W. Webb appears to be a notable exception). It's rare to find a safety on their board under six feet in height. On the other hand, all the linebackers on the board are quick, undersized guys; all the big Parcellsian run stuffers were on other teams' boards.

Differences of opinion: Not only did Dallas eschew some highly-drafted players for the above offenses, they had several guys ranked considerably lower than where they were drafted. They had a second-round grade on D. J. Hayden, who the Raiders reportedly were prepared to take with the third overall pick; in addition, they had third round grades on Desmond Trufant (taken 22nd overall), Datone Jones (26th), and Kyle Long (20th). The most egregious differences? QB E.J. Manuel, drafted 16th, had a fourth round grade, and CB Johnthan Banks, who the Buccaneers nabbed at #43, was given a sixth round designation.

Ranking them regardless of position: Thanks to a sliding whiteboard covering rounds six and seven, I only have the first five rounds of the position rankings that you can see behind Jerry in the above picture. Given that they only had a handful of players with sixth and seventh round grades, it's probably not a big deal. Here's what rounds one through five look like:

From this, we can ascertain the Cowboys draft, according to their board:

As this suggests, Dallas didn't follow a pure "BPA" strategy, even after their trade back with the 49ers. But they were pretty close to one. Here is what their draft would have looked like had they followed a pure "BPA" strategy (I've included options other than Matt Barkley at #80, given that the Cowboys would have just drafted Nassib):

It's clear that they didn't want to draft a quarterback and did want to draft a running back - hence passing on both Nassib and Barkley, and opting for Randle (who, to be fair, was the next player on the board after Dawkins and Jefferson).

There it is people. Thoughts? Go to the comments section and spill some ink!