It's the return of the tidbits! Get your morsel on!

Share All sharing options for: Cowboys Tidbits: Breakfast Of Champions

Links! Get your links here!

Nothing like a trip around the breakfast bar so you can fill your plate up with tasty Cowboys-related morsels of goodness!

The Cowboys have signed a young quarterback to the team. The club inked 6'3, 205 lb Aaron Corp after he was released by the Buffalo Bills following the 2013 NFL Draft. Buffalo resigned Tarvaris Jackson and jettisoned former starter Ryan Fitzpatrick. They then signed free agent Kevin Kolb prior to the draft, and then made QB EJ Manuel of Florida State the heir apparent as the first signal caller selected in 2013. They also brought in Jeff Tuel as a UDFA quarterback bringing their stable to a count of 4. There was no room for Corp.

After starting off as Mark Sanchez' backup at USC, Corp was slated to be the next starter until he broke his fibula. That opened the door for Matt Barkeley who became a four year starter. Corp transferred to the University of Richmond.

Corp transferred to Richmond in January 2010 and started the first five games that season before a knee injury shut his season down. He started all 11 games for Richmond in 2011, completing 63.7 percent of his passes for 2,682 yards and 17 touchdowns. Corp set an NCAA FCS single-game record for completion percentage against Towson, finding a target on 31-of-34 passes.

Corp will be the fourth quarterback in camp for the Cowboys. Although he might be looked upon as "just an arm" for the upcoming camps to give UDFA Dalton Williams (Akron) some competition and rest, you never quite know what could happen when someone is given an opportunity.

Speaking of rookies, there are some in NFL circles that think the Cowboys drafted a potential gem in small school cornerback B.W. Webb. As a freshman, Webb made a mockery of opposing quarterbacks, intercepting 8 passes on the season. Before the draft, former Cowboys scout Bryan Broaddus wrote up a glowing review of Webb, who I was already a bit infatuated with (taking him in a mock draft back in January). Here's what Broaddus wrote:

This cat can really cover some ground. Very quick. Can play in the slot and mirror his man well. Plays with nice awareness and will really drive on the ball when he sees it. Can play the ball at the high point, 40.5" vertical jump. Is one of those players that has outstanding numbers testing wise but you actually see him play that way. Has rare quickness. Is not afraid to tackle.

B.W. Webb is a cornerback from William and Mary that has playing traits like Asante Samuel. He looks like a solid cover two corner with 48 college starts. He holds up well in the man-to-man drills and has good anticipation in his zone drops.

Besides dropping an interception in the Super Bowl that would have prevented all of this Eli Manning madness we've had to endure, I think most fans would be pretty satisfied with an Asante Samuel career out of our fourth-rounder. I think most folks might be surprised, but the article announcing the BW Webb pick was, by far, the most popular article that we published on BTB during draft week. There's a lot of intrigue circulating the Cowboys Kingdom over just how many quarterback passes will get stuck in the Webb. See what I did there?

One player that might get picked up if not off is Felix Jones. The former Cowboys running back has found interest around the league a little light since he became an unrestricted free agent. He had visited Cincinnati before the draft, but the Bengals secured the services of both Gio Bernard and Rex Burkhead in the draft to team up with incumbent Benjarvus Green-Ellis.

It looks like the Eagles' new coach Chip Kelly is interested in seeing what Felix has to offer. Philadelphia brought Jones in for a visit and workout yesterday. The club did not draft a running back in the draft. As I tweeted yesterday, I'm not surprised they are interested in Jones; even if I am somewhat surprised Andy Reid and the Chiefs didn't look into him (they drafted Knile Davis). Jones had some of his (limited) better games against the Eagles.

Cowboys fans will remember his coming out party on a Monday night in Philly back in 2008 when he returned a kickoff for a scintillating touchdown on his way to 247 yards. He's had four games with over 100 return yards, two of them against the Eagles. He might only have 15 career touchdowns, but 20% of them came against Philly. OK, I'm reaching.

Friend of BtB Jimmy_K weighed in on the Eagles possibly securing Jones' services.

The Cowboys had a 1st round grade on LeSean McCoy but they didn't draft him because they had Felix Jones. Now Eagles might have them both.

That's right Jimmy. Maybe with both of them they'll manage 5 wins in 2013! Ayyyooooo!

The Cowboys will be opening the season on Sunday Night Football for the third year in a row, this time at home against the New York Giants. Many fans have been highly appreciative of the NBC broadcast opening, as country singer Faith Hill has graced their television screens singing her famous line "I've been waiting all day, for Sunday Night."

Well, the song and the performer are being remixed. Hill "retired" from the gig after seven seasons and the network has tabbed none other than Tony Romo ex-girlfriend Carrie Underwood to step into those knee-highs. Here's a pic, so you can, umm, recognize her. 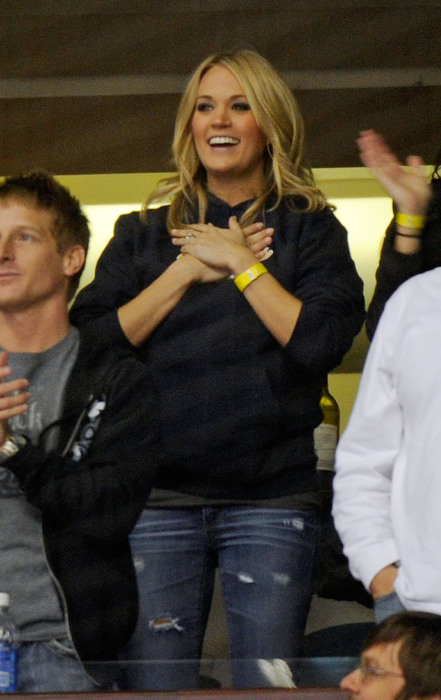 DMN scribe Rick Gosselin is much better known for his connections in the draft world than his football evaluation. However, he weighed in on a couple of Cowboys offensive line topics in his recent mailbag. The upshot? He doesn't think that the Cowboys will start a Livings/Bernadeau guard tandem (citing our often reported possible shifting of Frederick to guard should Costa excite, as well as Leary/Kowalski as possibilities) and that he like Bill Callahan being in charge of young tackles Darrion Weems and Jermey Parnell.

Finally, we'll end your morning breakfast with a little Jerry Jones. It seems that the big man is giving speeches as usual. This time for the International Trademark Association's Annual Meeting in Dallas. I'd copy/paste a snippet of James Nurton's article, but the website ManagingIP.com has blocked text capturing. To spite them, I advise that no one clicks on this link. Just kidding. Sort of.

Jones says that he decided to buy the Cowboys "while suffering from a "Tequila-induced hangover on a fishing trip in Mexico." The article goes on to say that Jones "realized early on the potential of the Cowboys to exploit their brand and sell sponsorship" but that caused a conflict with the league that led the NFL to suing Jones. His countersuit led the league to allow individual teams to market their own brands.

No matter what Jones does to pioneer league business, fans should never forget the two were in a heated court battle at one point. Not that supremely rich people hold onto grudges or anything.

Episode 2.3: A look at how Dallas is making future cap space, plus the Rayfield Wright Interview

Episode 2.2: A review of the linebacker corps, plus the full Brandon Magee Interview

Tony Romo Cuts Back On Golf

Five Training Camp Battles For The Cowboys On Offense