Which Cowboys Player From The 2012 Roster Will Be The 2013 Breakout Player?

The second NFL year can be a break-out party for talented NFL players. For some players, that breakout doesn't happen until their third or fourth years in the league. Who will be the Cowboys Breakout Player in 2013?

Share All sharing options for: Which Cowboys Player From The 2012 Roster Will Be The 2013 Breakout Player?

Since January, we've focused almost exclusively on the new talent the Cowboys acquired, first via free agency in March, then via the draft in April and most recently via the college free agent signings. And while it's great fun to contemplate what all these shiny new toys will bring to the Cowboys, it's also easy to lose sight of another great source of talent for the Cowboys in 2012: the guys already on the team.

It is a widely held belief that NFL players take a quantum leap in performance from their rookie season to their second season. After all, they've been through their first full season, they've been through a full NFL-level offseason strength & conditioning program, they're hopefully a little more mature, and they've had ample time to improve their technique. But that belief usually only applies to higher-round draft picks. For bottom-roster guys, that leap in performance sometimes doesn't happen until their third or fourth year in the league - if at all.

Late last week, we asked you to name your pet cats on the 2013 roster. Today, we're going to ask you to nominate your nominee for Breakout Player for 2013. But before you start typing a response (e.g. "The Fredbeard, SUKKAHHZZZ!") you can only select players that fit very specific criteria

Every year ahead of the season, Football Outsiders release their list of Top 25 Prospects, and in which they nominate the 25 players they think are most likely to have a breakout year. To qualify as a Breakout Player, the following criteria must be met:

• Drafted in the third round or later, or signed as a college free agent
• On the Cowboys roster in 2012
• Entered the NFL between 2010 and 2012
• Fewer than five career games started

One player who meets all those criteria is Matt Johnson, who gets my nod for 2013 Breakout Player. A day after he was drafted last year, I wrote a post titled "Matt Johnson will turn heads in the NFL." I see no reason why that prediction shouldn't come true this year. For those few who've forgotten all about "The King Of Pop", here's a picture Johnson recently tweeted of himself in training camp last year: 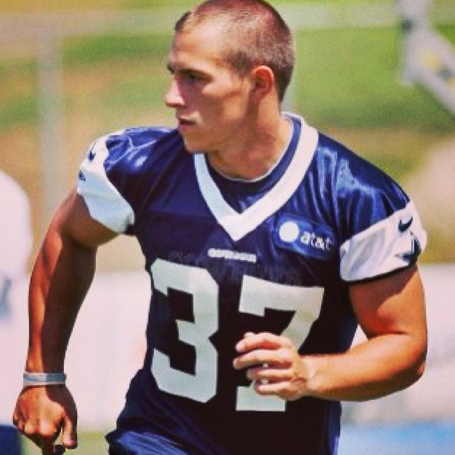 From this list, who is your nominee for the Dallas Cowboys 2013 Breakout Player?

Five Training Camp Battles For The Cowboys On Offense