Let's take a look at Cowboys 3rd round pick J.J. Wilcox from his time at Georgia Southern for some X's and O's and technique talk.

The Cowboys followed my plan to address the safety position, and drafted J.J. Wilcox with a third round pick in last months NFL Draft, and many believe that he has the ability to contribute immediately and compete for a starting job. Let's look at a play from his one year at the safety spot at Georgia Southern and talk about why I think the Cowboys liked him as a player. 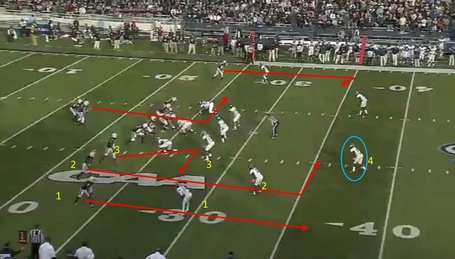 Here we have the offense in 10 personnel in a trips right formation with the RB away from the trips side. The outside #1 WR on the trips side has a bit of a reduced split (top of the #s) which creates almost a bunch look to that side. Georgia Southern counters with a 3-3-5 Nickel package.

I've drawn the routes that will be run by the offensive players, and circled Wilcox in Blue. I've also numbered the eligible receivers for the offense and the cover men for the defense to highlight a common technique for defending bunch sets called the "Box Technique". This is a 4 on 3 technique used to take away the advantages the offense creates by bunching 3 players together.

Based on the alignments of the defenders we could be seeing either Quarters (4 deep zone), Cover 2, or Man Under (2 deep man coverage). At some point this off season we will cover each of these coverages more in depth. 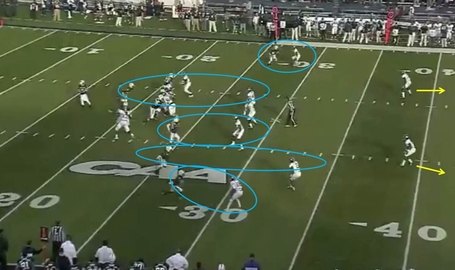 Once the ball is snapped, based on the techniques played by the defenders, we are seeing man under coverage. Each of the coverage guys are playing a "flat footed" drop, and reading for the quick game. This will result in them playing from a "trail" position which is typical of man under coverage.

The 2 deep safeties are dropping with their eyes on their run/pass keys (#2 WR to trips side, WR on single side).

Here we have reached the point where the #2 WR has reached the break on his dig route, and the QB is stepping up to avoid the rush around the edge. This is the point where the "Jump" call comes into play. This is a technique where a Safety and CB will exchange responsibilities if a WR runs a crossing route. The safety will "Jump" the crosser and the CB will replace that safety in his deep zone responsibility. You'll see this a often in single high safety defenses as well. The benefit of this adjustment is it keeps the WR from creating separation from the CB at the point of his break, and allows the safety to have a chance to make a play on the ball, or on the man to break up the pass.

Not much to see in this picture just wanted to point out how rounded off the WR ran his route. The red dot represents where he started his break, and he has gained an additional 3 yards of depth. This makes life alot harder for his QB.

At this point the ball is either out, or almost out. If the QB would have played with more anticipation and thrown the ball as the WR made his break, he could be making an almost uncontested catch here. Instead... 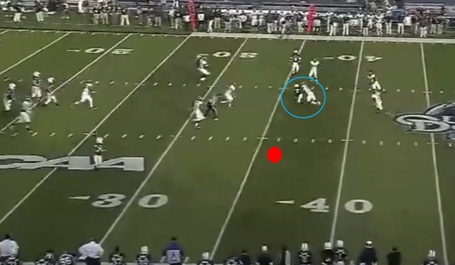 Here we see Wilcox cut off the WR on his path to the ball and make the interception. I really wish I would have saved an additional shot from a different angle at this point in the play, because Wilcox does an excellent job of getting his body between the WR and the ball and make a play on the ball. He simply out-physicaled the WR to the catch point and got to the ball first.

The red dot is still there where the WR made his break so we see that the WR has had to come all the way back to his original depth to try to make the catch.

This is just one example of Wilcox showing the ability to play down hill and make plays. On tape I've seen him come hard down hill at good angles and make solid open field tackles, delivering a blow to the RB and wrapping up to finish the play to the ground, and this isn't the only example I've seen of him making a similar break on a crossing route and beating the receiver to the ball.

Who Will Be The Cowboys' 2013 Breakout Player?

Tony Romo Cuts Back On Golf