On The Chalkboard: The Pistol Formation Isn't Just For Cowboys Opponents

Share All sharing options for: On The Chalkboard: The Pistol Formation Isn't Just For Cowboys Opponents

In 2012 a new formation took the NFL by storm. The Pistol, invented in 2005 by then University of Nevada Head Coach Chris Ault, was a way to combine the benefits of the shotgun with the downhill running game that he had coached for years.

It is extremely important for us as Cowboys fans to understand this look for a few reasons.

The pistol is not an "offense", it's not a scheme or a play, it is an alignment which is only a small adjustment to bridge the gap between the two most commonly accepted QB/RB alignments and gives a lot of flexibility for the offense.

The pistol, which aligns the Quarterback in a shortened shot gun position with his running back directly behind him, provides a ton of options for offensive coordinators and creates a series of innate advantages for the offense over alternative formations.

Notice that none of the benefits mentioned above have anything to do with the read option or any type of QB running plays. This is a formation that provides possible benefits for ANY offensive system.

Let's take a quick trip to the chalkboard to look at a few variations on the formation. 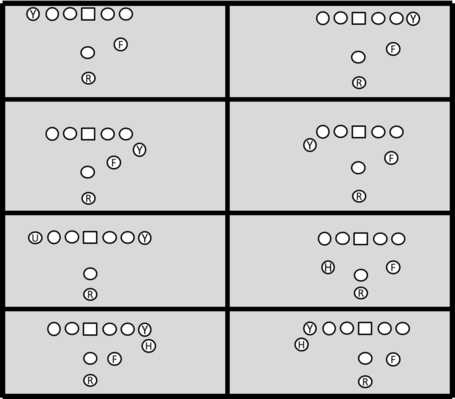 Here, of course we are looking only at the core of the formation, but we see 8 variations of the formation. Most of which are very similar to basic under-center looks that every NFL team runs every week. If a formation gives you the ability to improve your offense with the above advantages, without largely over-hauling the structure of your offense, of course you're going to implement it. Which is exactly why I think, the Cowboys, under the influence of "Coach Romo" will be lining up in the pistol several times a game this year.

This post is somewhat of a prequel to a series I'm planning on the read option. We'll look at the nuance underneath it, the tough spot that it puts the defense in, and my plan for how to stop it based on the approaches of different defenses in 2012.