Lost in the commotion surrounding the Cowboys new defensive scheme is the fact that they are undergoing a similar, albeit less radical, change on the offensive side of the ball.

Since Monte Kiffin was hired as the team's defensive coordinator, much has been written about how the scheme change promises to simplify things for the Dallas defenders, allowing them to play faster (most recently by Tom). What has received considerably less ink, however, is that they Cowboys are adjusting their offensive system, and in similar fashion: the new scheme also focuses on simplicity.

Allow me to begin with a late-April tweet by our resident NFL insider, Birddog26:

Cowboys moving to an Erhardt/Perkins style offense but Garrett will have his own unique fingerprint on it. Oline friendly, fast, dynamic

In the FanPost that brought my attention to the tweet, the ever-thoughtful and knowledgeable scottmaui writes,

As I understand, Erhardt/Perkins is more about terminology than actual plays. Much shorter terminology for play calling means quicker communication at the line, more time to assess the defense and adjust, or snap quickly to catch the defense unready, and much less last second snaps as the clock winds to 0 (especially with Frederick making the line calls)

Maui provides an excellent thumbnail assessment of the Erhardt-Perkins system, one confirmed in much greater detail in an article by Smart Football's Chris Brown that appeared in Grantland back in January. Brown begins by recapitulating a series from last season's Monday Night Pats-Texans tilt:

It's late in the first quarter. A play ends, and seconds later Tom Brady has his team back at the line. He gives a hand signal to his receiver, a tap to his offensive linemen. "Alabama! Alabama!" The ball is snapped. An outlet pass goes to Stevan Ridley, who rumbles to the Houston 40-yard line, another first down. Subs run in. Soon, the Patriots are back at the line. Except now, running back Shane Vereen is lined up out wide. The Texans are scrambling. Brady takes the snap and hits Vereen on a quick hitch. Vereen dips around linebacker Bradie James and then spins back inside, gaining 25 yards before he's done.

The next play is the same play, with the same personnel, with zero time for the defense to recover. The three receivers to Brady's left crisscross around defenders while Aaron Hernandez, who was lined up as a back to Brady's left, dashes to the flat. He makes the catch and takes it to Houston's 1-yard line. The same 11 Patriots sprint to the line, but Vereen is now in the backfield. The play is a run to the left, and he's into the end zone untouched. Touchdown, New England.

What allows the Patriots to move from play to play with such stunning efficiency? Are they smarter? More versatile? Better coached? Well, sure, that's part of it. But the key, Brown argues, is the offensive system they use. As he frames it, there are essentially three offensive systems in use throughout the league these days: the "West Coast" system developed by Sid Gilman, and handed down through Don Coryell to Ernie Zampese, Norv Turner and a host of others; Bill Walsh's timing-based offense (NOT the "west coast" offense), which is derived form Paul Brown's innovative scheme and remains the NFL's most popular system; and the aforementioned Erhardt-Perkins model.

The backbone of the Erhardt-Perkins system, Brown notes, is that plays - pass plays in particular - are organized by "concepts." This requires some unpacking. The Coryell system was built around the receiver's route tree, and used it as the foundation of its play-calling. Last year, I wrote about what is arguably the biggest highlight in Dallas' franchise history, the 70-yard fourth quarter Aikman-to-Harper pass that set up the winning touchdown in the 1992 NFC Championship Game. The playcall was simple: "896 F flat." The numbers correspond to the different receivers: the split end runs a post (the "8" in 896), the tight end runs a seam straight up the field ("9"), and the flanker runs a 10-yard dig route ("6"). Harper ran the post, and it put the Cowboys in the Super Bowl. A playcalling system centered around the route tree allowed Norv Turner to call any pass combination and all a receiver had to know was the number associated with his route.

Walsh's scheme uses what Brown calls a "memory system." On running plays, the familiar two-digit numbering system is employed. Passing plays, however, are typically denoted by the primary receiver's route, while the rest of the players are required to memorize their tasks. That was all well and good back in 1979, when Walsh took over the 49ers. In the intervening years, as offensive systems have grown more complex, with option routes, check-downs, protections, etc., playcalls have become correspondingly complex, to the point where playcalls that used to be quite simple, such as "22 Z-In," now read like html code: "Scatter-Two Bunch-Right-Zip-Fire 2 Jet Texas Right-F Flat X-Q." More frustrating is that two plays that are conceptually quite similar can have two very different calls.

Like the Walsh system, the Coryell system has adapted rather clumsily, in two primary areas. With the advent of one-back and multiple TE formations, there are often more than three players running routes, which exacerbates one of the systems fundamental problems: when backs (or "H" or "F" backs") run routes, it means having to use both numbers and words (note the "F flat" in the above play from the 1992 NFC Championship game indicates fullback Darryl Johnston's route). More problematically, NFL offenses run more than ten pass routes, so any route not part of the standard route tree (a post-corner-post, for example) has to be designated by a word, further complicating the play call.

By calling plays according to "concepts," the Erhardt-Perkins system avoids these various problems. In this system, each passing play has a name, but that name is based on route combinations. Let's take a look at a set of plays taken from the Pats' playbook: 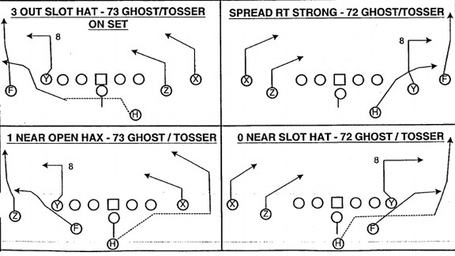 In this example, one side features a three man route combo; on the other side, we get two. On the three man "Ghost" side, no matter the formation, there is an outside receiver, an inside receiver, and a middle receiver, and each will be responsible for running his designated route. The outermost receiver (whoever that may be; here, we see it can be the "F," "Z" or "H") runs a vertical route, working towards the sideline. The middle receiver (in this example, always the "Y", gets an inside release and runs an eight-yard out route; the innermost receiver (either the "H" or the "F") runs a flat route. On the other, two man side, we get a double-slant concept ("Tosser"). As we can divine from the play headers, the playcall designates the passing concept on each side of the formation, so a fairly simple call designates the formation ("Spread Right Strong": a three-WR, two-TE set, with the "H" in the backfield, to the quarterback's right, and the "F" split out wide right) and the passing concepts on the left and right sides of the field, "Tosser" and "Ghost" respectively.

For the quarterback, this simplifies things tremendously; a team can run the same "play" out of a dizzying array of formations but his reads stay the same. And it makes line calls simple: instead of calling every receiver's route, the quarterback simply has to call out the one-word concept, which describes everything the receivers are to do. And once receivers understand each concept, they only have to know at which position they're lined up.

This has a two-fold effect: it reduces the amount of information a player has to process on a given play. But it doesn't reduce the level of complexity for defenders, who still have to process the tremendous of information given them. Looking at this, we can see how it would be possible for the Patriots to run the series described earlier in the article - and why the Texans might appear so confused. But much of the success is due to their offensive system. As Brown writes:

No team that uses the Coryell or [Walsh] systems can adapt easily to a fully functional up-tempo no-huddle because, simply, they can't communicate that efficiently. The Patriots are built to communicate in one- or two-word designations, and so, with judicious use of code words, it's simply a matter of translating what they already do into a no-huddle pace.

Last year, of course, the Cowboys ran a lot of no-huddle offense, largely because they fell behind early in so many contests. Because of its success, a lot of people thought that they should make the no-huddle their base offense. One of the impediments to doing so what that they still ran a West Coast system. With the installation of the Erhardt-Perkins system, the Cowboys are preparing to communicate in a way that will allow them to run the no-huddle with ruthless efficiency.

In his tweet, Birddog26 claims the system is O-line friendly (how could that be bad?), fast (again, good) and dynamic (I vote "yes"). Heck, if Dallas' offense, no-huddle or not, can confound opponents as New England's did in destroying the 10-1 Texans on Monday Night Football last December, then I'm all in, whatever changes are made.