If the Cowboys can't reach an agreement on a contract extension with Anthony Spencer by July 15, Spencer plays the season under the $10.6 million franchise tag. We've got this and other important dates for the Cowboys lined up below.

Share All sharing options for: NFL Calendar: Important Dates For The Dallas Cowboys

The NFL has released the complete 2013-2014 league calendar, and there are a few important dates worth pointing out as they pertain to the Dallas Cowboys. Let's take a look:

For future reference, you can find the full NFL calendar with these and other dates in the Library section here on BTB: 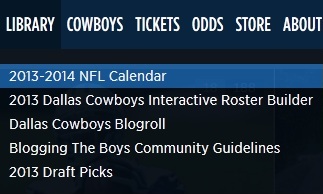