Training Camp Freeze Frames: Miles Austin And The Art Of Getting Open

Miles Austin has been underappreciated in Dallas for quite some time, now, after 'disappointing' recently with pedestrian (read: better than only a few number-one receivers) performances the past two seasons. It's time we remember what he have here with him.

Share All sharing options for: Training Camp Freeze Frames: Miles Austin And The Art Of Getting Open

You know that feeling when you can't get enough Cowboys' football? Of course you do; you're following football in July.

Personally, one of my favorite things to do when covering the Cowboys is to review the video of the game (I'll reserve the term 'film work' for when I can navigate the footage with a dial, like the pros, rather than rapid-fire-clicking the play/pause button in search of the best still).

True, there are as of yet no games to review; the Blue and White Scrimmage hasn't even yet been played in Oxnard this year. What we do have, however, is access to some surprisingly high-quality video provided by DallasCowboys.com.

While the 'team' portions of the videos have less-than-ideal camera angles (is it too much to want All-22 camp footage?), I was impressed with how well the small crew was able to capture the one-on-one drills, particularly between receivers and corners.

Dez Bryant's highlights have already been torn apart and re-uploaded as their own highlight reel, so I won't be going down that road today. Instead, I'll opt for our second superstar receiver who has increasingly become an afterthought in the minds of many fans.

Miles Austin shouldn't be forgotten. There are only a handful of teams around the NFL where Austin couldn't be the top receiving option; Dallas is one of them.

In an attempt to bring Austin's abilities (and shortcomings - he does have them) into focus, I'm focusing on his work in one-on-one drills against Dallas' top corner - Brandon Carr. The video in its entirety can be found here.

In the still below, Austin has reached the top of his initial release, the point at which he must break into his route, gaining separation and getting open. The important points when analyzing something like this involve the physics of momentum and the all-too-important footwork.

Austin approaches his break with a stutter step that culminates in this somewhat floating state shown below. His toes have little-to-no contact with the grass as his momentum propels him forward. The importance of both of his feet being free lies in the fact that he can plant either foot from that position and drive in either direction.

Austin's upper body becomes the key. He appears to be searching for eye contact with Carr (defensive backs shouldn't be making eye contact at this point, but should be watching for shifts in the receiver's center of gravity) while twisting his shoulders and arms to indicate an impending outside cut (where outside is to the left of this image).

Carr's head is up, watching Austin's upper body. His momentum, from his backpedal, is carrying him backward, but his feet are not still uncommitted, as Austin's are. Instead, Carr has shifted his weight to his left leg and is preparing to drive off of that leg in order to spin toward the sideline and run with the route he believes Austin has already committed to.

Austin has successfully sold the outside route. 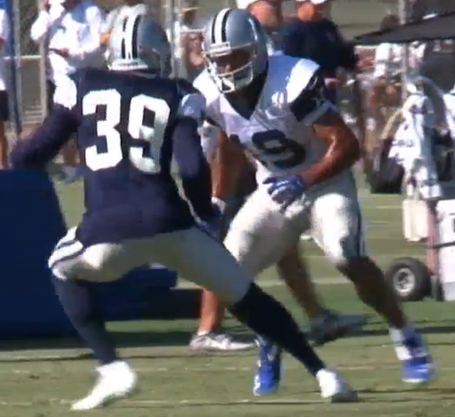 Austin, with footwork nearly mirroring Carr's from the image above, then plants his left leg in order to drive inside. His remaining forward momentum allows him to keep his balance, while his explosiveness (when his hamstrings are intact) should tell us that Carr's already in trouble.

This footwork on Austin's part also fulfilled the task of bringing Austin to a stop. Poor footwork and balance can lead to receivers rounding off their routes (their initial momentum carries them further downfield as they make their in/out cuts, giving the route a rounded path that is much easier for defenders to follow). This route is about as crisp as can be, especially for July.

Carr, on the other hand, is in trouble. The last frame showed that he had committed to the outside route just one step too early and had begun his outside spin. His body's twisting to the left, now, but his head stays with Austin and he's already realized his mistake. To compensate, he brings in his right leg and drives it into the grass early (remember, it was already extended to the right side of the frame earlier, so this step isn't part of a striding motion but rather a correction to the initial misstep). 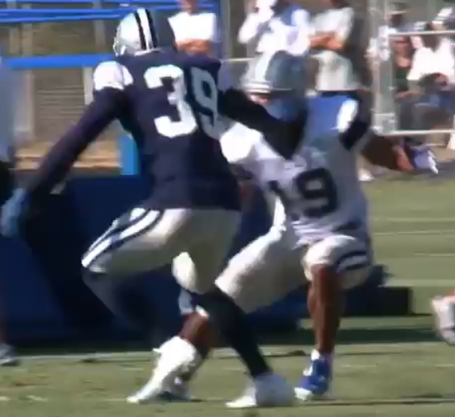 Despite Carr's quick correction (he does manage to spin and close in what seems like enough time to contain Austin after the catch), the post-cut shot does not look good for him. Austin is on the right of the shot, while Carr is just barely off-camera.

Austin has effectively created over five yards of space in which to operate. He has executed his route and is now running across the field while looking for the quarterback to deliver the football. Everything through this point could easily be thrown into a textbook entitled 'How to Run Routes in the NFL.' This doesn't turn out to be an Austin highlight, however. 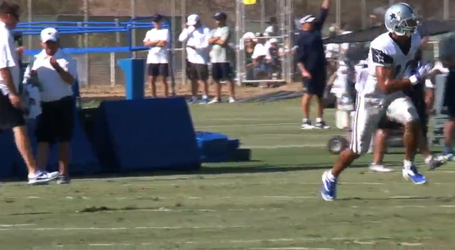 If you recall, I mentioned earlier that Miles Austin has some shortcomings (particularly when compared with the rest of our roster, specifically Dez Bryant, Jason Witten, and our entire running back corps). The biggest of these is a lack of discipline when receiving the ball.

I've covered my fair share of Miles Austin's play in Cowboys' highlights and lowlights. I've seen him show an uncommon ability to track the ball in the air, particularly off of deflections. He has the capacity to be a great receiver (where receiver, in this case, means 'catcher of the football').

The case of the 'dropsies,' which plagued Austin early in his career, disappeared somewhat for his 'breakout' season, and then returned last year and here in camp, seems to be connected to Austin's desire to make plays after the catch. This may be the curse of a receiver who made millions of dollars based largely on a couple of broken tackles against the Kansas City Chiefs (and this is not to suggest he didn't deserve a good contract - he did).

Despite the downside of his at-times inconsistent hands, Miles' ability to consistently create separation against even great cornerbacks, and potential to transform those clean routes into huge plays after the catch, still make him a bigger breakaway threat to defenses than anyone in Dallas not named Dez Bryant. I look forward to seeing him on the field when we start keeping score, embarrassing players with different-colored jerseys.

Be sure to check out the whole video over at the mothership.