The preseason game in Oakland provided looks at the Cowboys' entire roster (or at least those healthy enough to play) in some capacity. Rather than try to single out one player's highs and lows, it seems more fitting to provide various highlights and lowlights from the day, regardless of who features in them.

Let's just jump right in, shall we?

The first play is a Raiders 3rd and 1 with 13:38 remaining in the first quarter. That's the last time I'm adding that information, by the way, because the Cowboys-centric broadcast (which is really a completely different experience, having watched the Raiders broadcast originally) conveniently keeps the down-and-distance included in their score bar.

Our highlighted player is Nick Hayden, who is lined up in what appears to be a 0-technique with a slight shade to the far end of the field, and also sports a stylish yellow arrow on the back of his head.

The play, as many of us may remember, is a run by fullback Jamize Olawale (you miss that guy, don't you? I do). This play also serves as a reminder that this particular Cowboys' defense is not built to defend short yardage. It may well hold fast on 3rd and 3, but it generally will not be able to refuse an opponent a single yard up the middle while in base defense.

This is due to the personnel required to run the scheme; there aren't enough 310-pound bodies left to squeeze into every gap. We'll have to learn to deal with it. Don't want to give up 3rd and 1? Then don't allow nine yards over the course of the first two downs. It's simple, really.

Anyway, back to the play. The above image shows the ball snapped and the linemen just starting to react. The next image is captured just under one second later:

The arrow is still pointing to Hayden's helmet - or at least the small sliver of it still visible. At the snap, Oakland's center fired out, into Hayden, while Hayden's first movement, for whatever reason, was vertical. He stood up at the snap (and was somewhat late reacting, to boot). This is what got Monte Taylor chewed out in practice not long ago. Rod Marinelli simply can't stand it - and this is part of the reason why.

Side note: Monte Taylor wasn't cut in spite of an exceptional performance against the Dolphins. He was cut and moved to Injured Reserve with an undisclosed injury. He and Tyrone Crawford are the only players currently on IR, with Callaway, Igbinosun, and Sheffield all being cut (again) after first being cut and placed on IR.

Anyway, Hayden is driven back and, despite DeMarcus Ware's contact with Olawale in the backfield (just look at him bulldozing through the edge of that line), the first down is converted easily as Olawale falls into the large clearing left where Hayden had originally lined up.

Again, this isn't the end of the world. We will surrender almost as many 3rd-and-1s as we see this season, but we'll live with it because it promises improved pass defense and turnover differential.

Moving on, we take a one-off look at another failed play, but this time for what could have been, rather than what was. 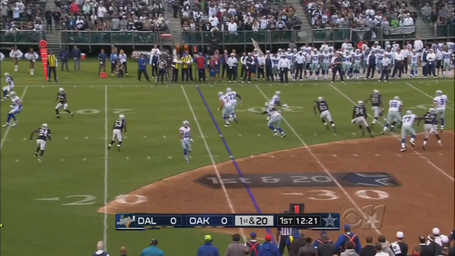 The Cowboys are attempting to set up a screen pass here. The play failed due to the pass hitting the dirt in front of Murray as Tony felt the pressure getting too close.

I thought the play design itself was interesting, however. Miles Austin ran a crossing route with Harris and Witten heading straight up the field before breaking down about 12 yards later. After Austin's route cleared the right hash (from where the ball was snapped), the screen blockers released.

The blockers are Leary, Frederick, and Bernadeau. Both offensive tackles stay to block the edge rushers.

Leary stumbles getting out across the field, but Frederick and Bernadeau look surprisingly comfortable and just a bit faster than expected as they set up and took off down the field.

This play could have been very special. DeMarco Murray out in space with his entire interior line in front of him causes me to salivate, imagining the safeties and corners running for their lives (or being thrown aside nonchalantly) as Murray marches slowly in for six behind his mobile fortress.

This time, we get to talk about successful run defense. To get that, we either need a defensive lineman - I mean rushman - to get lucky on his way to the quarterback, or, the more likely option, we need linebackers to correctly diagnose and attack the play.

This particular play is a case of the latter: 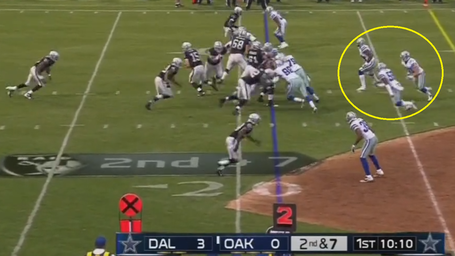 All three of our linebackers fit nicely within that circle. This frame is captured during the linebackers' 'read-and-react' stage of the play. The blocking is just starting to take shape, the quarterback has turned toward the runner on his way to hand off the ball, and the running back has begun his pre-handoff read.

Note the various states of recognition from our three backers. Bruce Carter, at top, is standing flat-footed, still diagnosing. Sean Lee, at far right, is starting to lean forward and close in on the line of scrimmage. Ernie Sims, at bottom, is airborne as he's already launched himself into a sprint toward the edge.

As a note, it's possible that Sims' rush was designed rather than decided, but that information is not knowable by anyone outside the meeting rooms in Valley Ranch. 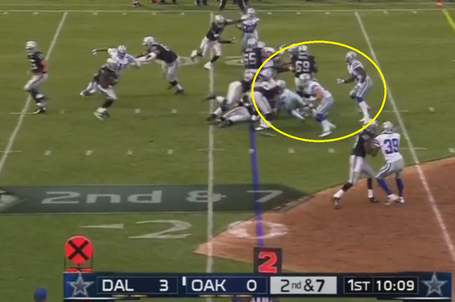 Now, with the play more fully developed, and the ball in the runner's hand, we can see how our defenders are doing. Kyle Wilber has successfully orbited the offensive tackle, who admittedly was only needed to redirect the end rather than stonewall him. The other three rushmen are neutralized.

Back in their cozy yellow circle, the linebackers are attacking the play. Carter, in the rear, is ensuring that the runner doesn't escape to either outside edge. Lee is headed for the open space on the near side of the field. Ernie Sims, only half-visible, is trying his hand as a human missile, turning sideways and jumping between two Raiders offensive linemen. 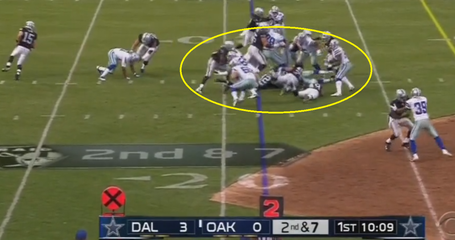 Through some sorcery (I honestly can't figure out how this worked), the blockers that Sims had just split mysteriously collapse, while Ernie has kept himself in perfect position to meet the back a yard behind the line of scrimmage. This is one of the first plays Ernie Sims was in for during the ball game, and it was the first play where the SAM linebacker position made me say 'wow.'

Lee is standing by to clean up the tackle if necessary, while Carter maintains security (read: watches Sims make a nice play). Nick Hayden ends up finishing the play in the end, but first contact goes to Sims. who neutralized the back's momentum and kept control of the back's legs as the play was finished.