Practice today started at 5:15 pm PT instead of the usual 4:00 pm PT, and lasted until 7:30 PT. Last year, practices started at 2:30 PM PT, which had the benefit of allowing us to post our camp summaries before midnight Eastern time. No such luck today.

We'll split today's camp summary into two parts. The first one, which you're reading now, will focus on the position drills and the 7-on-7 work, and will include a couple of pictures from camp. The second version, which barring unforeseen events will be posted at 9:00 am ET sometime tomorrow morning, will contain a detailed play-by-play of the padded practice.

There was a moderately large crowd in attendance today, as Cowboys fans used the Sunday to come out and catch a glimpse of their favorite team or collect some autographs.

Most of the fans lined up early were busy looking through their complimentary training camp guide to figure out who numbers No. 3, 7, and 18 were. Nick Stephens, Alex Tanney and Kyle Orton were on the field 45 minutes ahead of practice and were throwing balls to some staffers.

About 20 minutes later, Miles Austin and Dwayne Harris were greeted with loud cheers (more specifically, Austin was greeted by loud cheers from mostly teenage girls) when they made an early entrance and started stretching. A short while later, the Blue Period kicked off with special teams work. The coaches once again handed out red and yellow practice jerseys to the second and third teamers, while the first team played in the regular jerseys. The first team lined up as follows:

This was before Lissemore was injured, so we'll see how that lineup plays out over the coming days. While the first team was practicing, Coach Bisaccia kept experimenting with the formation: every couple of snaps Hanna would move back into Rosario's spot, and Tanner would take up Hanna's spot. Also, it looks like Harris and Dunbar have solidified their hold on the returner spots. Dunbar and Harris were occasionally spelled by Terrance Williams and Anthony Armstrong, both of whom wore red practice jerseys worn by second teamers.

When the second team took to the field, they lined up as follows:

Brewer and Moore kept subbing in and out for each other.

Overall, the special teams session was a mixed affair. The returns weren't conducted at full speed so there's not much to be learned from watching, but the jugs machine delivered the balls at full speed, and both Harris and Williams had trouble catching the ball. Also, Sean Lissemore and Eric Frampton suffered some kind of injury in the session, though as yet we don't know the severity of their injuries.

The team then moved on to position drills. The entire defense, split into three position groups (DB, LB, DL), started out with the same exercise in which they would run up to the ball carrier from behind and try to punch out the ball. Once the ball was loose, they would practice scooping it up.

This was followed by individual position drills. The defensive linemen practiced getting off snaps as soon as the center (Leon Lett) moved the ball. Lett tried to distract the linemen once again with all sort of twitches, hand- and foot movements to try to draw the players off sides. Compared to last week, it seemed to me that the players jumped offsides less frequently.

The linemen may be called rushmen in the new scheme, but that doesn't mean they get to rush straight ahead all the time, and Marinelli had his charges work on changing direction after the initial jump - get off and redirect. The linebackers ran a similar version of this exercise where they had to get off a block and then get to the ball carrier. The DBs meanwhile were involved in a variety of interception drills.

On the other side of the field, Bill Callahan brought out the chute for his offensive linemen, as they went through a series of fundamental drills designed to create positive blocking habits. The chute is a cage-like device that forces the linemen to stay low as they explode from their starting stance, all the while maintaining a low pad levels. Fundamentals, fundamentals, fundamentals.

Further down the far field, the QB and WRs/TEs were throwing and catching passes against air.

The team then moved to a blocking session between running backs/tight ends and linebackers/DBs, and the players really got after each other. Lance Dunbar in particular turned up the heat with successive pad-popping blocks against Cameron Lawrence and Caleb McSurdy, which he both appeared to win. I never thought I'd write such a thing about a 5'8" running back, but Dunbar is a ferocious and fearless blocker. He's making a strong push for the number two spot this year.

Pads kept popping as DeMarco Murray and Sean Lee went against each other. Hard. Very hard. There is no love lost between these two, who frequently end up in each others way in practice.

Things got a little bit heated when Phillip Tanner blocked Taylor Reed to the ground. Reed lost his helmet in the process and a scuffle ensued in which both players started throwing punches, but their teammates quickly intervened. Both shook hands after the scuffle and walked away.

Romo as the QB 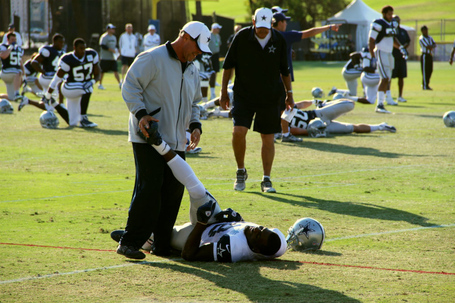 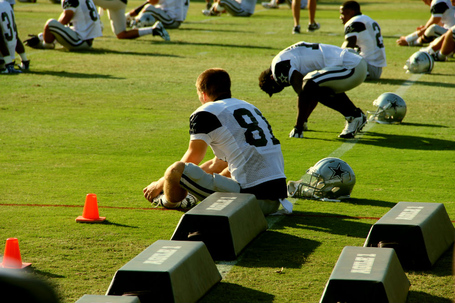 Danny Coale is still open (no, the joke hasn't gotten old yet, not by a long shot) 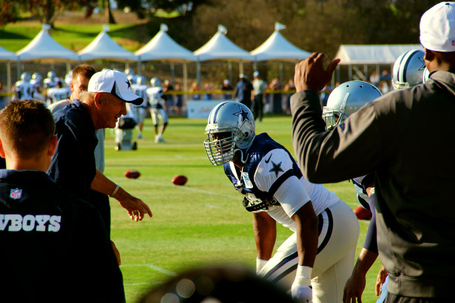 DeMarcus Ware hasn't heard anything about the new NFL face mask rules yet. 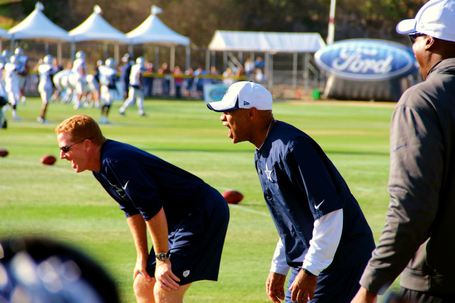 Garrett and Henderson shout encouragement to the defensive players in dummy drills. 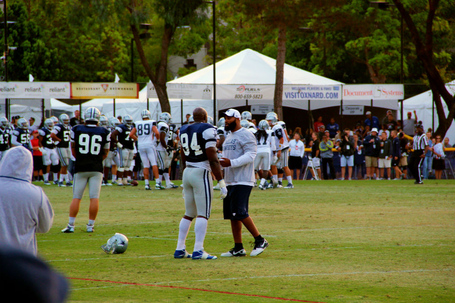 A healthy-looking Anthony Spencer jokes around with DeMarcus Ware at the end of practice. 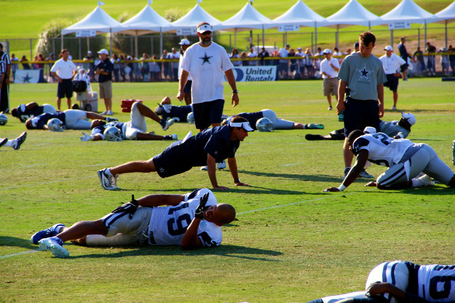 WR Coach Dooley shows DeMarco Murray what a proper push-up looks like. In the foreground, Miles Austin is smiling - he is not wincing in pain as his hand accidentally touches his hamstring.

Click on any of the above pictures to see a full-screen version.