Cowboys training camp started with the usual suspects today, as the backup QBs made their way to the field first. But today, Bill Callahan joined them early and talked at length with Kyle Orton.

The rest of the team soon trundled out and, like every day, practice started with a special teams session. In yesterday's camp report, we chronicled which players are on the returning team, today we look at the kicking team on punts and kickoffs. As you think about these special teams units, keep in mind that the players on them have to be on the gameday active roster, and obviously can't be taken from the gameday inactive roster, so the guys running with the first team units may have a leg up in the competition for roster spots. In addition to the kicker, these 10 players made up the first team:

After the special teams session the team moved on to a helmetless 11-on-11 session, which was conducted at half speed and served to go through the day's plays. DE George Selvie and DT Nick Hayden found themselves as starters on the defensive line, as did Sterling Moore at cornerback.

Jermey Parnell participated in some position drills but did not yet take part in the action on the field, though he did line up at right tackle (Demetress Bell at left tackle) in the helmetless sessions. Later, the second team tackles were Edawn Coughman (LT) and James Nelson (RT).

The second team at one time saw Magee, McSurdy and Holloman in at linebacker, although Justin Durant also got snaps with the second team on occasion.

On the sidelines, Darrion Weems, Kevin Kowalski and a third player (possibly Ray Dominguez) were working out with Mike Woicik. This remedial running group was later joined by Jermey Parnell and Demetress Bell, both of whom were fully suited up but didn't take part in the 11-on-11 action. 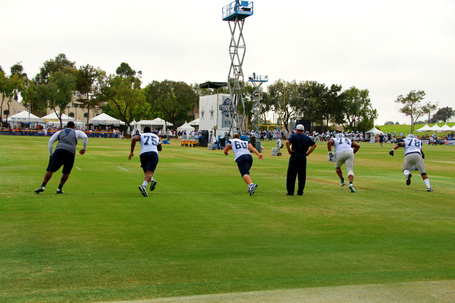 After a brief stretching period, the players moved into position specific drills, which today featured a few new elements.

The wide receivers, tight ends and running backs initially ran pass-catching drills together in which they ran out-routes, caught the ball near the sideline and then had to work through a couple of blockers a they made their way up the field. The emphasis here was to secure the ball after the catch in the correct hand and then hit the blockers.

The kickers were off in the distance practicing catching the ball from an imaginary long snapper - which turned out to be a coach chucking the ball at the kickers with quite some velocity.

The defense was on the other field and appeared to have some kind of meeting for the first couple of minutes but they broke that up when the horn sounded and went off into their individual position groups, just like the offensive players did. 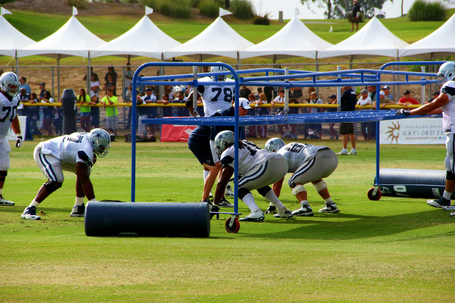 The offensive linemen again worked with the chute, though they ran a different exercise today. Instead of simply exploding out of their stance, two players were in the chute, and while the first player jumped straight ahead, the other player was pulling behind him and had to hit a tackling dummy a little further down the field. But the players didn't just line up for this exercise in random fashion, instead they were purposely paired:

Tyron Smith and Ronald Leary always formed a duo, as did Free and Bernadeau. I did not see who, if anybody, Travis Frederick formed a duo with, but did see Costa work with multiple partners, so that may have been the same with Frederick. Going by these pairing, it looks like Ronald Leary is locked in on the left side. Jermey Parnell worked this drill with the other linemen and was clearly giving extra effort, perhaps in an attempt to make up for lost time.

Right next to the offensive line, the defensive linemen were conducting their drills, and the emphasis here was on line shifts: the linemen lined up in various formations, sometimes with two players, sometimes with more, and worked on driving in one direction as a unit. Later the linemen would go through their customary drill with Leon Lett, who would try to draw them offsides.

The position drills were followed by a series of field goal attempts by new kicker Brett Maher, who made every single field goal as the team gave Dan Bailey an easy day of practice.

I missed most of the initial 11-on-11 action after the field goal drills as I was trying to find a vantage point from which to film the drills, and by the time I finally got set up, the team moved to 7-on-7 drills. Bummer. But here's how those went down:

More later in a separate post as we take a more detailed look at the ensuing 11-on-11 scrimmage.