Let's pick things up with the second quarter of action in Cowboys @ Raiders. This is where the second units begin to check into the game and the majority of the roster battles start to surface.

We begin with a Terrelle Pryor pass.

From right-to-left, the circled players are Terrelle Pryor, about to release the ball, Brice Butler, the target of the pass, and Eric Frampton, the safety responsible for that portion of the field.

The key to defending the pass from the zone is reading the quarterback - diagnosing the play - in order to react early. You'll see that even though the ball hasn't yet left Pryor's hand, Frampton has identified the throw and the target and is in a full sprint, intent to prevent the play. 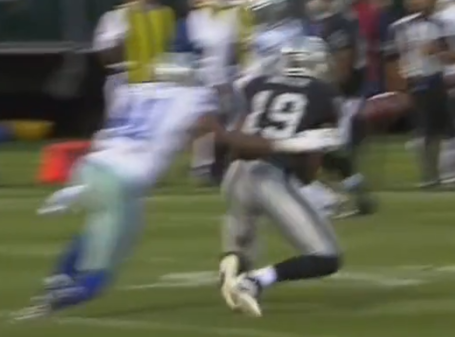 Simply put, Frampton makes the play. He deflects the ball and tackles the receiver.

Safeties in Kiffin's Tampa 2 scheme will be asked to play deep and prevent big plays. This means that they won't often have an opportunity to run underneath a ball and intercept it when protecting that deep portion. Often, they'll have to fight through the receiver's body - legally - in order to make a play on the ball. Doing so without penalty is not the easiest technique to master, but Frampton pulled it off here.

The importance behind this play, in case you were wondering, is that Frampton seems to be directly competing with Danny McCray. The Cowboys have shown in the past that they are willing to hand a roster spot, and a decent paycheck, to a player whose value lies solely in special teams play. Things are changing, however, as it becomes more and more difficult to see the Cowboys carrying fewer than five tight ends, or four running backs, or six receivers; those roster spots have to come from somewhere. If Frampton can prove to be an equally effective special teams player, while also providing competent safety play when needed, McCray may lose his place on the roster.

Our next capture comes from the telestrator of the fine folks covering the game on behalf of the Cowboys. They decided to take a good look at Wilcox' interception (funny how the Raiders' coverage didn't spend much time replaying Cowboys' successes, right?). 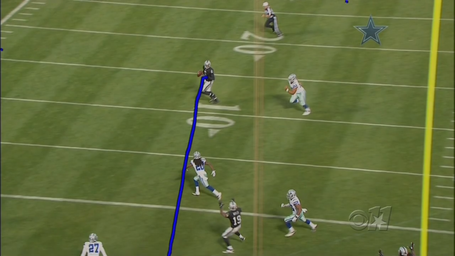 The commentary associated with this image was essentially 'if you're a quarterback, don't throw it past (to the right of) this line,' meaning don't throw across your body, especially while running. I can't imagine a successful throw in this situation being physically possible (unless perhaps it was thrown so hard as to penetrate through BW Webb's body, but I threw out that possibility). To clear Webb but still drop down for Butler, the ball would need to be thrown in a gentle arc. To avoid Magee and Wilcox breaking on the ball, the pass would require tremendous velocity. Two incompatible requirements leads to the obvious conclusion of 'DON'T THROW THE BALL!' But I'm glad he did.

You've seen enough of that play, though, I'm sure, so we'll move on.

Cole Beasley stars in our next segment. 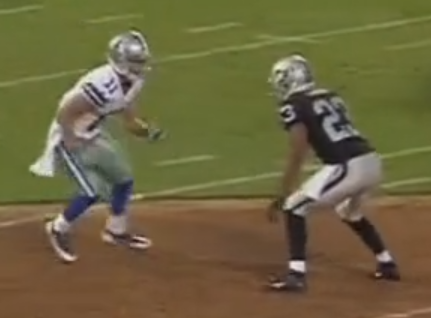 First of all, I really enjoy spotlighting players' one-on-one battles. Something about the stills of these players in isolation is just...motivating - especially when our guy wins.

Cole, here, is squaring off with Joselio Hanson, who at 5'9 towers over his Cowboy opponent. Hanson also has the edge in experience, having nine seasons under his belt.

This moment captures Beasley's pre-cut breakdown. He sets up his move by controlling his center of gravity while making a series of fakes, with the ultimate goal of causing the opponent to react and take off in the wrong direction; any wrong movement will result in an advantage for the receiver. To his credit, Hanson appears to be watching Beasley's hips, because hips don't lie when you're reading a receiver's movements (eyes, hands, and feet, on the other hand, can't be trusted). 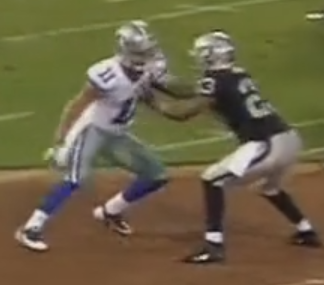 Beasley's fake outside has no effect on Hanson, who stays rooted to the ground and instead decides to press the smaller Beasley. Surely the bigger vet has what it takes to jam the diminutive Beasley, right?

The jam itself looks good. He's placed himself between Beasley and where Beasley would like to go. He's balanced, bent at the knees, and square to his target. 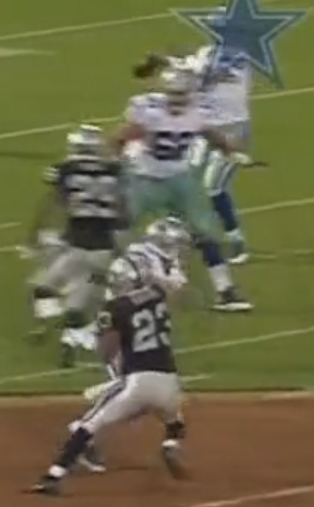 Beasley, however, executes a swim move that might make Rod Marinelli look twice, easily negating Hanson's jam while disrupting his balance and creating a throwing lane.

Orton sees this victory, and can be seen winding up his throwing arm at the top of the frame. 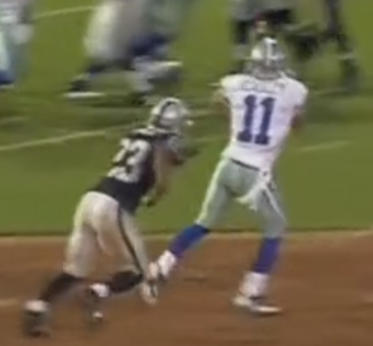 The resulting catch is virtually uncontested. The ball can be seen just above Beasley's helmet.

Plays like these are what make Cole Beasley so difficult to cut. You look at the other receivers and see big bodies with potential. Beasley shows you a near-finished product that still continues to improve. If Miles Austin were to go down, I'd feel much better with this year's edition of Cole Beasley filling in than I would have with any edition of Kevin Ogletree (who, lest we forget, is a 'proven route runner').

If Beasley keeps up these performances, he will keep drawing a paycheck - if not here, then somewhere in the NFL.

We continue with a look at the play that resulted in offsetting penalties (holding on Danny Coale along with a late hit by the Raiders): 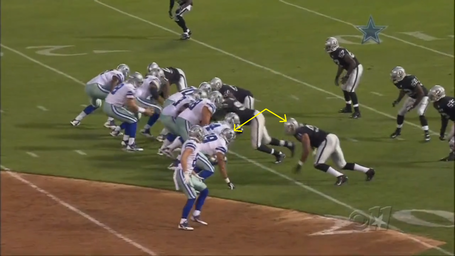 Highlighted on this play are Gavin Escobar and Jack Crawford (#91, a veteran DE out of Penn State). That's right, folks, we're going to take a look at the elusive subject of Gavin Escobar's blocking.

The only thing to note at this point is that Gavin's not particularly quick out of his stance. Most players have moved already, but he hasn't. 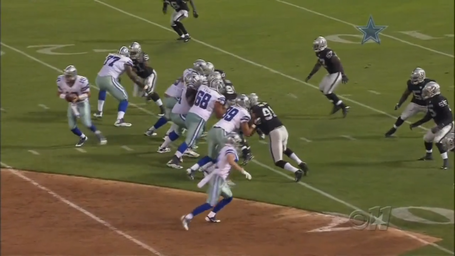 Now, we have the two of them engaged. The taller Escobar (6'6 to Crawford's 6'5) has a slightly lower pad level at this point. The play is a near-side handoff headed toward Escobar.

The DE wants to get inside to blow the play up, and Escobar is tasked with stonewalling his man. The back must choose a hole based on the blocking he sees, so Escobar can't simply redirect his man and hope for the best. This is Gavin as a play-side blocker - blocking the point of attack. 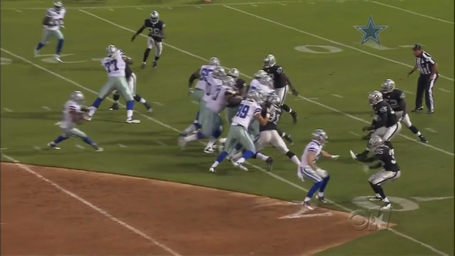 What's this?! Escobar has seemingly maintained his leverage advantage, gathered himself, and pushed the defender backwards (keep in mind that Escobar's giving up 20 pounds, here, to the 273-pound Crawford). The defender's center of gravity has shifted from the infield-side of the forty-yard-line to the opposite side between stills.

Lance Dunbar has the ball and decides that he'd rather run behind Escobar than Leary. I honestly couldn't tell you why, as it looks like a big play if he decides to go left. Still, I'll take it as a compliment to Escobar that Dunbar is willing to run behind him with only Danny Coale to help out on the outside. 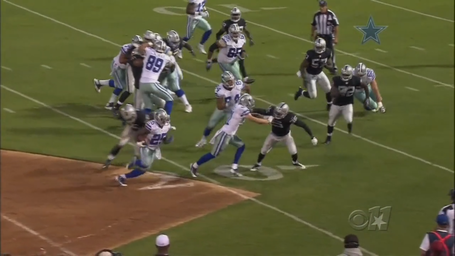 In the last shot, it's become clear that Escobar has won his battle. An elbow into the face mask for good measure causes the defender to buckle backwards and sink in defeat. Watching it in slow motion a few times, I couldn't help but hear 'FINISH HIM!' right before Escobar delivered the blow each time.

Also visible here is Danny Coale's holding penalty. That's not a good look, especially when the other Cole is lighting things up.

Anyway, the point is that Escobar can and does execute blocks properly. In this case, he was dominant. It wouldn't be a stretch to imagine that there were other plays in which he was at least passable. This play alone, however, shows that Escobar isn't strictly a receiving threat and is capable of helping in the running game.