Summary of the day's events in Oxnard, which included a lot of screen passes, exciting one-on-one matchups and extensive position drills.

Today was the sixteenth practice of the 2013 Cowboys camp, and you would think that things would follow a certain routine by now. Well, some things did and some things did not.

A familiar sight welcomed the early arrivals at camp today. Kyle Orton was out and about, throwing balls long before anybody else made it onto the field. He was later joined by Nick Stephens, and soon after most of the remaining players trundled onto the field. But unlike previous practices, there was no specific blue period for the rookies and down-roster players. Instead, players loosely mingled as they waited for practice to start.

The only exception were the offensive linemen. Three linemen, Frederick, Costa and Arkin were practicing snaps with Bill Callahan (Does this give Arkin a leg up as the swing G/C?), while the remaining linemen were off to the side with Frank Pollack. There the linemen were working on pulling; little red cones were placed on the grass and at the snap the players had to take a step back and circumnavigate the cones, as they would a fellow linemate, and explode upfield.

Pulling drills have been a staple of the afternoon practices over the last couple of days, so that's something you may want to look for in the game on Saturday.

Also off to the side, the three new defensive ends, Toby Jackson (53), Jabari Fletcher (69) and Travis Chappelear (64) were doing exercises to get themselves ready to participate in team practice. 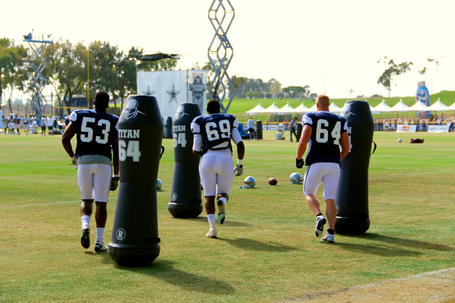 4:00 pm PT is Garrett time, and the horn blew exactly on top of the hour.

The team split into three large groups. The entire defense came together as Monte Kiffin and Matt Eberflus provided detailed instruction on alignment and spacing of the defensive line as well as gap responsibilities for the linebackers and the rest of the defensive backfield. While the defense was thus occupied, the offensive line ran blocking drills against each other, with half the linemen simulating defensive linemen at any given time. The skill position players were all involved in various receiving drills.

In this helmetless portion of practice the coaches had the offense and defense working against each other at half speed and were calling plays off cards for both the offense and the defense. It was not clear whether these were scripted plays in anticipation of the Cardinals game or simply plays that would be practiced later. I didn't keep a detailed count, but it can't have been more than 15-20 plays that were run in total by the first, second and third units.

Against the Cardinals, the starters will likely play at least a quarter of football, so it might make sense to have a few base plays ready for Saturday.

Unusually for a practice in this year's camp, there was no special teams session in the early portion of practice.

In these drills, the TEs, WRs and RBs gathered for a variety of receiving drills, DBs and LBs were running interception drills on the other field and both groups of linemen came together and loosened up in anticipation of the team stretching period.

Outside of Dez Bryant once more getting special treatment from S&C coach Mike Woicik, no special occurrences during this phase of practice.

Under the watchful eye of Coach Garrett the team then split up into different position groups and commenced about 30 minutes worth of position drills. 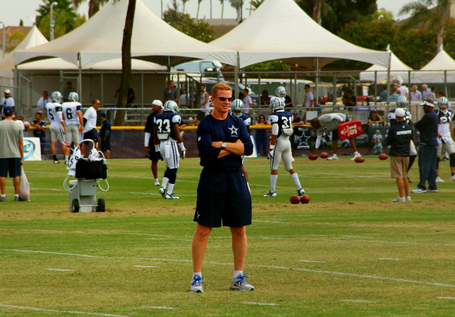 The offense ran through an exercise against air in which they practiced a variety of different screen passes. The screen passes went to Dez Bryant, Miles Austin, Andre Smith, and Dwayne Harris, who had Darrion Weems pulling out and running ahead of him impressively. These screens were practiced by the first and the second team, and every time the second team ran its drill, all offensive personnel would run upfield during the drill as well. Nobody in this camp stands around on the sidelines for long. These drills were followed by screen plays for the running backs.

In the meantime, the DBs had a go at the tackling sleds, while the linebackers were practicing ball-stripping techniques.

Once the screen drills finished, the wide receivers broke into a separate group and practiced all sorts of ball control and ball security drills. One consisted of running through a gauntlet of fellow receivers and holding onto the ball while the other players tried to strip the ball. Another drill saw the receivers being whacked by a coach with an American Gladiator-style pad just when they were making the catch. Sounded like fun until Armstrong had to leave practice after dislocating his finger from a hit with the not so softly padded pad. But Armstrong came back later and resumed practice. Yet another exercise saw the receivers running through a maze-like pattern of cones that saw them change direction repeatedly and at the end of which they had to catch the ball.

Off to the side, the tight ends were involved in rigorous drills blocking DEs, on the other field the defensive linemen were abusing the tackling dummies, and the DBs and linebackers were working on highpointing the ball.

Once those drills concluded, 1-on-1 passing drills commenced on the near field, with the wide receivers going up against the defensive backs on the right side of the field and the tight ends and running backs facing the linebackers on the left. A spirited and at times feisty session ensued.

Here's a picture sequence of Gavin Escobar going up against DeVonte Holloman: 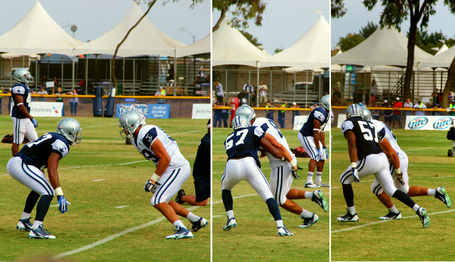 Holloman initially has Escobar in very tight coverage, but then Escobar breaks to his left (towards the camera) and gains good separation from Holloman, but the pass is not thrown far enough ahead and Holloman just manages to knock the ball down as both come crashing towards the sideline. 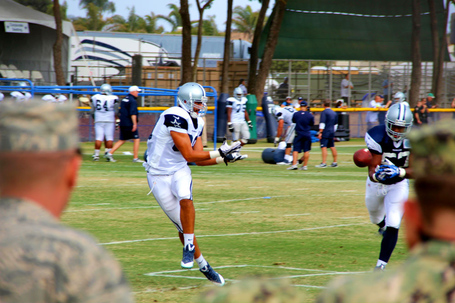 Other highlights from the 1-on-1: 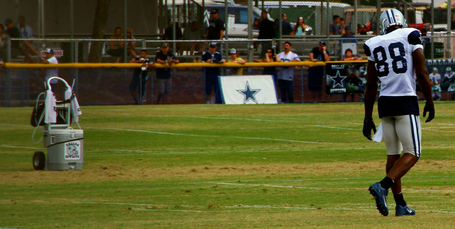 I'll have the details of the 11-on-11 drills in a later post. The team ran some general 11-on-11 drills with a strong focus on the running game for a while, then followed that up with the only special teams session of the day. After that, they gave the linemen a breather by running 7-on-7 drills for a while and then returned to 11-on-11 drills in which they focused on specific game situations.

The team gathered together at around 6:00 pm ET and heard a short address from Garrett as practice concluded slightly early for the day. 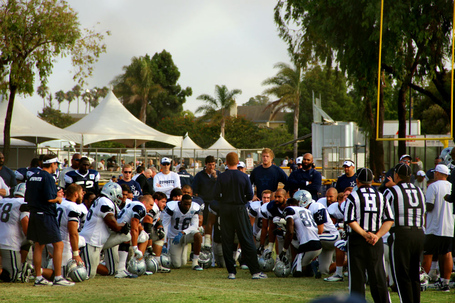