Picking up with the third quarter, we continue to examine the Cowboys' second preseason matchup.

I'd always wanted to devote a considerable amount of time to reviewing the second halves of preseason games, looking for good plays by the not-so-good players and perhaps identifying the Cowboys' next UDFA superstar. Now, I've finally had the opportunity.

Quarter three was not what I expected it to be. The sad thing about the not-so-good players is that their play, at most times, is also not-so-good. That makes for not-so-good material for film review. Equally poor competition leads to a corresponding lack of negative plays to highlight.

Nevertheless, we continue our quest through preseason Week 1.

The first big play of the third quarter was Nick Stephens' bad-decision interception. The throw was bad, the decision was bad, and the interception was easy. The next two big plays were passes to Brice Butler by Raiders' quarterback-of-the-future Matt McGloin. Bad angles of pursuit don't make for entertaining freeze frames.

Interspersed with those big plays were a number of ineffective runs by both teams, draining the clock considerably. The run game finally caught a break, however, and I couldn't let this play pass me by.

And so, we begin with a Joseph Randle run. 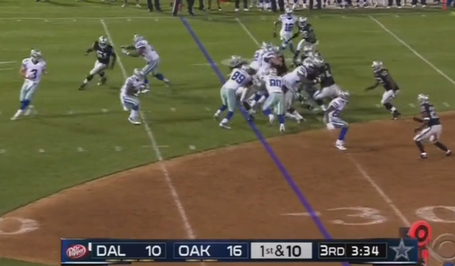 We see Randle here reading the defense with the ball in his hands. He's broken down parallel to the line of scrimmage, with his shoulders tilted slightly toward the near (to us viewers) sideline, indicating the decision he's made about where to go.

Neither side looks very promising, with uncovered defenders on both sides for Randle to worry about. He chooses the near side of the field, where he at least has a single blocker to work with. Choosing the right side also helps him to avoid being run down from behind. 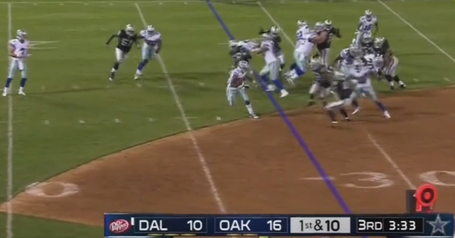 Depending on your worldview, Randle was either appropriately rewarded or deservedly punished for expecting a wide receiver to block for him.

Like Kobe Bryant in his prime, Jared Green expertly splits the two defenders almost entirely untouched. Unfortunately, his objective was to create contact. Believe it or not, poor blocking skills are a huge negative for a receiver on the roster bubble. Let's hope he cleans that up once he hits the practice squad.

Anyway, with two defenders barrelling towards him, it would seem Randle (whom I've always thought to be lacking in speed and agility, albeit undeservedly) is looking at, at most, a one-yard gain here.

And then, of course, Randle shows why he doesn't necessarily belong on the field with third-string players. He's just too quick for these third-string linebackers to chase down. Now, after making the type of play I'd expect from Lance Dunbar or a young Felix Jones, Randle has a lot of green (scratch that, brown) in front of him, with only a single safety in the way.

Keep in mind that, though the play began on grass, Randle is now running and cutting on dirt, so footing could become an issue, especially for an inexperienced player. 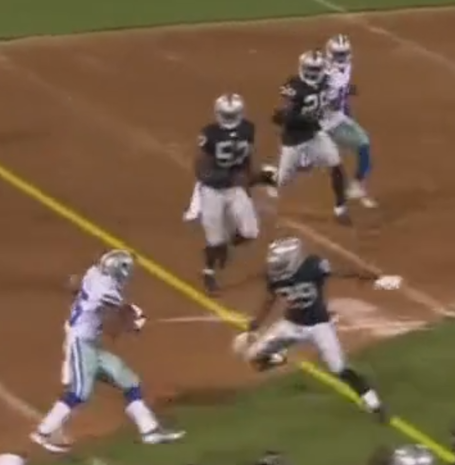 Randle slows down to set up the safety for a move, which allows the Raiders' defense to pursue and close in around him. The slowdown that Randle requires here is what separates him from someone that you'd consider as having elite agility; a player with elite agility requires little deceleration prior to executing a juke against a defender, which allows them to break touchdowns rather than first downs.

Nonetheless, Randle has set up the safety, and is now putting on his move. 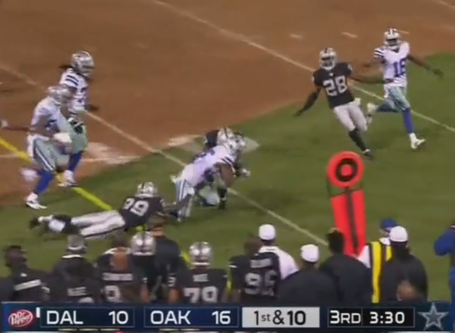 Randle embarrasses the DB, who only manages a hand on Randle's waist, and lowers his shoulder to deliver a blow to the linebacker, rather than simply go down to avoid the hit. Keeping his pads lower than the linebackers tackling him is one of the keys to having a long career as an NFL running back, so it's nice to see Randle already embracing a 'best practice' on the field. 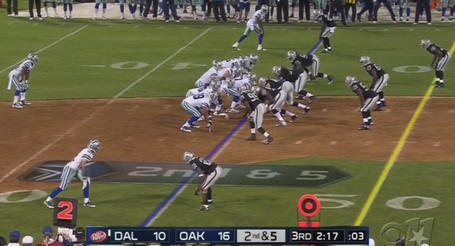 Take note of the Cowboys center. Yes, that's right, this is a Phil Costa play. What could possibly be coming next? (Hint: it doesn't bode well for Costa fans, myself included) 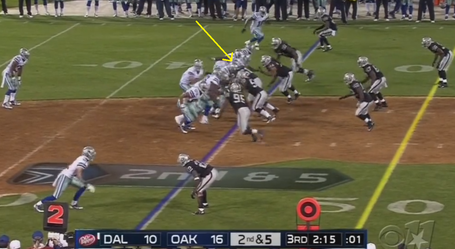 With the ball snapped, the two players collide. The arrow points at the area where their helmets are in contact. Careful examination of the picture reveals that the Raiders' 1-technique has his shoulderpads beneath Costa's, and has a much more powerful position (leaning forward) than Costa (standing almost straight up). Leverage is not on Costa's side. 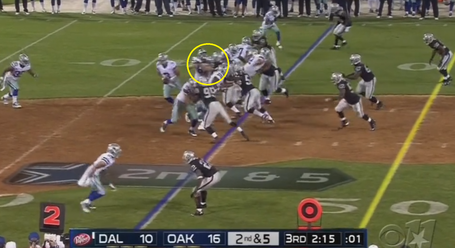 Take a close look at the game clock from the two previous images. Note that not a single second has passed. Phil Costa is moving backward almost as fast as Nick Stephens at this point in time. The defender has gotten to his chest and extended his arms. If Costa lets anyone extend their arms against him, it's essentially a game over.

Rather than sadistically capture every yard of backward movement, I'll skip to the end of this now. Use the time you would've spent cringing at those stills to thank the football gods for Travis Frederick in a Cowboys uniform. 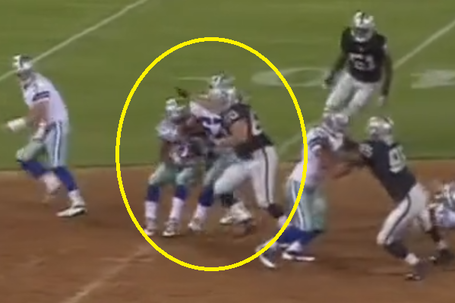 I can't imagine what Nick Stephens is thinking at this moment, but it's notable that he's staring at what just happened from the moment he executed the handoff. Costa has literally been driven into the running back a full five yards behind the line of scrimmage.

Luckily, no running backs were harmed in the sampling of this scene. Randle spins around Costa (who can at least get in the way), and manages to return to the line of scrimmage.

If it eases the pain, I'll note that on the next snap Costa was able to maintain something resembling a pocket in pass protection. Every snap Costa takes doesn't turn out like this one; this is just one sample of a much larger pool of (mostly mundane) performances. This is neither proof of Costa's inadequacy nor disproof of his excellence.

The third quarter ends several plays later on a Jared Green first down.