The Dallas Cowboys are the second biggest road draw in the NFL behind only the Denver Broncos, and the NFC East is the only division in the NFL that has four teams among the Top 13 road draws.

Vivid Seats, a secondary-ticket marketplace, just released a report about which NFL teams are the best and worst road draws of the 2013 season. The Dallas Cowboys are the second biggest road draw in the NFL, increasing ticket prices by 47.3% as the road opponent. The Peyton manning-led Denver Broncos top the list, driving up ticket prices on the secondary market by 53.7% as the visiting opponent. The 49ers (+42.6%), Patriots (+41.7%) and Packers round out the top-5 (+39.8%).

Meanwhile, the Jaguars are the worst road draw in the league, decreasing ticket prices by 27.4% as the visiting team. The Rams (-26.2%) and Browns (-22.8%) follow as the least sought after road opponents. Here's the full list: 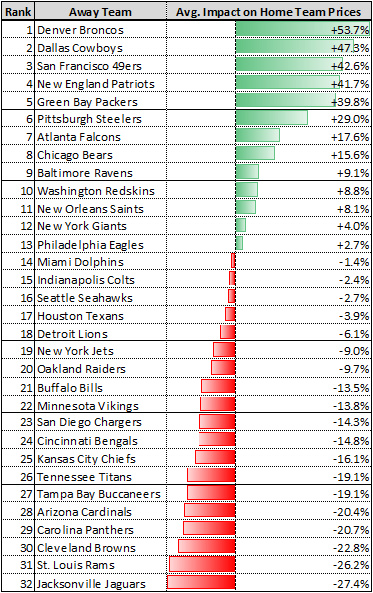 The NFC East is the only division in which all four teams are road draws, though the Giants and Eagles only make the list of top road draws by the narrowest of margins.

About a month ago, we looked at the hottest tickets in the NFL, and saw that two Cowboys away games, @ Bears and @ Saints, were among the top ten most expensive tickets in the NFL. Today, we'll preview the top eleven cheapest games for the budget-conscious NFL fan, and it shouldn't come as a surprise that most of those games involve teams ranked as the weakest draws in the league. Here are the bottom 11 NFL games by average ticket price:

The average current ticket price per Vividseats.com for all NFL games is $203.75. Ticket price data is from 8/7/2013, fees for parking, suites, luxury boxes, and the London games have been excluded.

Fans across the NFL are willing to pay a premium to see the Cowboys, none more than in Kansas City, San Diego, and New Orleans, who'll have to fork over about twice the average home game price to watch the Cowboys. Here are the average prices for the Cowboys' road games.